This American president's empathy with the Arab/Muslim world could be a crucial first step in brokering peace. 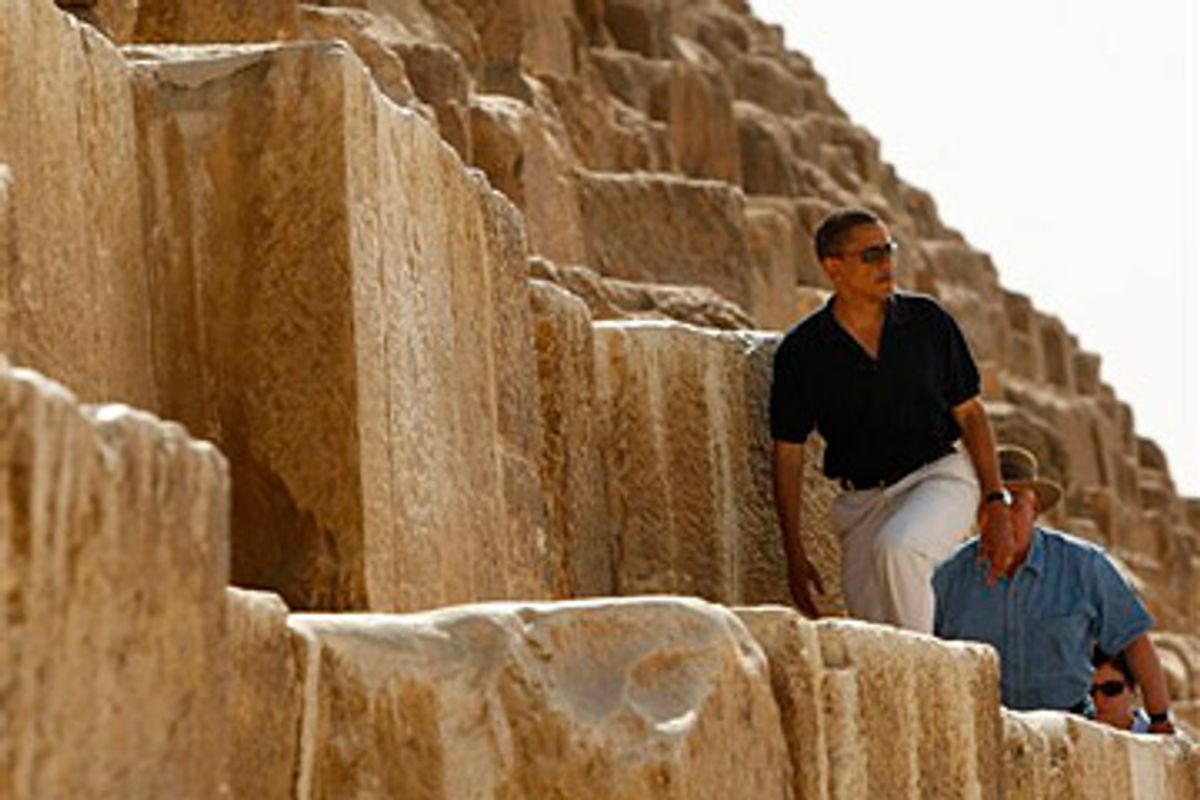 It was the most important speech of Barack Obama's young presidency. And he delivered big-time.

President Obama faced a daunting task in Cairo. He urgently needed to hit the reset button on relations between the U.S. and the Arab/Muslim world. Repairing a relationship that has been fraught with suspicion, misunderstandings and enmity for decades requires addressing many painful and complex issues. Above all, however, it meant confronting two critical ones -- the "war on terror" and the Israeli-Palestinian crisis. George W. Bush's "war on terror," which culminated in his invasion of Iraq, foolishly treated all militant Islamist groups as America's enemies and made the paranoid neoconservative idea of a "clash of civilizations" a self-fulfilling prophecy.

The Israeli-Palestinian conflict is a festering sore that has poisoned Arab and Muslim attitudes toward America for more than 60 years, and it has done enormous damage to America's -- and ultimately Israel's -- national interests. With great diplomatic skill, but above all with an empathy toward his audience unmatched by that of any previous president, Obama took on both of those subjects. And as a result, to judge by the mostly positive reaction from Arab and Muslim viewers, America's standing in the region just soared. The only people gnashing their teeth right now are al-Qaida and the dead-end extremists on Israel's far right.

Obama made it clear that Bush's "war on terror" was dead and buried. As was the case throughout the speech, his most crucial point was made more by what he did not say than by what he did. Obama never once used the words "terror" or "terrorists." And when he spoke of "violent extremists" whom America had to defeat, it was clear that he meant apocalyptic Islamist groups like al-Qaida, not militant national resistance organizations like Hamas or Hezbollah, or for that matter Islamist political movements like the Muslim Brotherhood. Fanatics like al-Qaida have little standing in the Arab/Muslim world, and Bush's ill-advised conflation of them with groups that do have popular followings only enhanced their popularity. By rejecting "terrorism" as the defining term for America's Middle East policy, and by abandoning Bush's amorphous and unwinnable "war" against it, Obama instantly recast America's entire relationship with the Middle East. The era of moralistic and self-defeating name-calling in U.S. Middle East foreign policy appears to be over.

But Obama's unprecedented comments on the Israeli-Palestinian conflict were even more significant. Although that conflict has been America's single greatest foreign-policy liability for decades, for a number of reasons -- historical ignorance, Cold War alliances, sympathy for a state created in the wake of the Holocaust, domestic politics -- American presidents have always seen the crisis through an Israel-centric lens. Obama's speech represented a decisive change in that blinkered vision. If he has the wisdom and courage to follow through on it, June 4, 2009, may be remembered as the day when a just resolution to the world's most dangerous and intractable conflict came into view.

Obama did something no other American president has ever done: clearly and unequivocally state that the situation of the Palestinian people is intolerable. By uttering that one word, "intolerable," Obama made a profound moral commitment before the entire world to help the Palestinian people, by brokering a just and lasting peace between Palestinians and Israelis that will result in a viable Palestinian state. Obama's speech announces a new American approach to the Israeli-Palestinian conflict, in which Washington truly recognizes both sides of this tragic narrative.

Only a fool would believe that peace between Israelis and Palestinians is now assured. It was only a speech, and not a perfect one. It was stronger on moral empathy and a general vision than on specifics. It failed to break any new policy ground. Obama glossed over some uncomfortable realities, and whether he will be willing or able to make the hard decisions necessary to realize his vision remains to be seen. But it was a crucial step forward.

Obama's discussion of the Israeli-Palestinian conflict was delicately and precisely balanced. He challenged both parties to see the conflict through the other's eyes. He explicitly equated both sides' "legitimate aspirations," acknowledging that for both, "a painful history ... makes compromise elusive." And many of his statements, while apparently innocuous, represented important shifts in tone and historical understanding.

For example, Obama opened his discussion of the Israeli-Palestinian crisis by saying, "America's strong bonds with Israel are well-known. This bond is unbreakable. It is based upon cultural and historical ties, and the recognition that the aspiration for a Jewish homeland is rooted in a tragic history that cannot be denied." For Palestinians, at first glance, this statement appears to claim that historic anti-Semitism and the Holocaust justified the creation of the state of Israel, which resulted in the Palestinian naqba, or catastrophe, in which 700,000 people fled or were driven from their homes and never allowed to return. The invocation of the Holocaust to justify Israel's actions against them is a sore spot for Palestinians, who have long argued, with justice, that they were made to pay the price for Western sins they did not commit. But read more closely, Obama's statement is narrower: He does not say that the tragic history of the Jews justified the creation of Israel and the concomitant expulsion of the Palestinians, only that it explains their legitimate aspirations for a Jewish homeland.

It is a fine distinction, but an important one, because it reveals that Obama was aware not only of the trauma that led to the creation of the state of Israel, but also of the injustice toward Palestinians that was bound up in that creation. This point, which is at the root of the entire conflict, is still too explosive for any American president to make explicitly, but by phrasing his statement the way he did, and referring several times to the "displacement" of the Palestinians, he sent a signal that he understands it.

But in the same part of his speech, Obama made perhaps the most eloquent case any U.S. president has ever made for Israel's existence and the special relationship it enjoys with America. His words were probably not greeted with joy in many parts of the Middle East, but they were honest and critical for his audience to hear.

Other aspects of Obama's speech revealed the same nuance. Some Palestinians and their supporters have already criticized as hypocritical Obama's demand that Palestinians renounce violence, pointing out that Obama has still said nothing about Israel's Gaza onslaught, that they have been suffering under an illegal occupation for decades, and that international law accepts the right of an occupied people to use force to resist occupation. Moreover, as the astute Israeli analyst Daniel Levy pointed out, it is simply not true that no oppressed people has ever successfully used violence in their struggle. Many liberation movements, including Nelson Mandela's African National Congress, have used violence, including terrorism, as an instrument -- and some of them have succeeded. The ANC, anathematized by many Western governments as a terrorist organization, helped bring down South Africa's apartheid regime.

But if Obama displeased his audience by failing to condemn Israeli violence as well as Palestinian, he subtly changed the American discourse about the Palestinian struggle. The very example he used to argue that violence never works, the American civil rights movement, implicitly compares Palestinians to black Americans in that movement, thus legitimizing their grievances and their struggle. His reference to the Israeli settlements in the West Bank, and its continued control over Gaza, as an "occupation," a term that some Bush administration officials refused to use, was important. And by mentioning "colonialism" in his laudable and important acknowledgment of Western misdeeds in the Middle East, he showed that he sees the larger historical context of the Palestinian-Israeli conflict.

Obama also broke new ground in talking about Hamas. His speech represented an unprecedented opening to dialogue with the militant group, dialogue that will be necessary if there is to be a lasting peace. Ostensibly, he stayed within the parameters of official U.S. policy, insisting that "Hamas must put an end to violence, recognize past agreements, and recognize Israel's right to exist." But by directly acknowledging that "Hamas does have support among some Palestinians," and calling on it to help "unify the Palestinian people," he made it clear that he does not intend to pursue Bush and Israel's failed policy of fomenting division between Palestinians, and that he is prepared to be realistic in dealing with Hamas.

In a larger sense, Obama's approach to Hamas must be seen within the context of his rejection of the "war on terror" and his targeting of groups that pursue "violent extremism." It is noteworthy that Obama did not call Hamas a terrorist group and avoided mentioning Hezbollah at all. Obama unequivocally condemned violence, as he should. But indirectly, he made it clear that America's real enemies are al-Qaida and its ilk.

But Obama did not simply confront Israel with hard truths. He also challenged Arabs and Muslims to overcome the ignorance and bigotry about Jewish history, and Jews, that is unfortunately widespread in the Middle East. He rightfully made it emphatically clear that the Holocaust is a historical fact, and that "threatening Israel with destruction -- or repeating vile stereotypes about Jews -- is deeply wrong." He also made the vital point that such hateful words and deeds only set back the Palestinian cause, by causing Israelis to understandably revert to a Holocaust mindset in which Palestinians and Arabs in general become the second coming of Adolf Hitler.

If it was strong on generalities and in recasting the entire tenor of America's relations with Arabs and Muslims, Obama's speech was short on specifics. That is understandable: No one expected him to start talking about which parts of Jerusalem will be under Palestinian control. Still, on at least one crucial subject, the status of the occupied territories, his speech was unduly cautious. Obama referred to "continued" Israeli settlements being a problem, not the settlements themselves. As all experts acknowledge, the minimum required to achieve a two-state solution is for Israel not just to freeze its occupation, but to end it. Obama could and should have said that: The Israeli public needs to hear unequivocally that the settlements are doomed.

Nor did he talk about the other two key issues, refugees or Jerusalem (although the speech did laudably imply that the holy city should be shared by all three faiths, a position that could foreshadow a rejection of the right-wing Israeli stance that it should be undivided and wholly controlled by Israel). His vagueness on these key final-status issues, combined with his reference to the outmoded "road map," could indicate that Obama has not yet formulated a coherent policy for the day after the speech.

But that is a worry for tomorrow. Today, everyone who has a stake in the Israeli-Palestinian tragedy -- and that includes Palestinians, Israelis, Americans and everyone else on the earth, for this tragedy involves us all -- should take heart at Obama's historic speech. Overcoming the decades of bitterness and hatred, the rivers of blood spilled on all sides, will not be easy. But for the first time in a long, long time, it is possible at least to hope.