Are House Democrats about to block Obama's new secrecy law?

Defeat of the Graham-Lieberman amendment would be an important blow against secrecy and presidential power abuses. 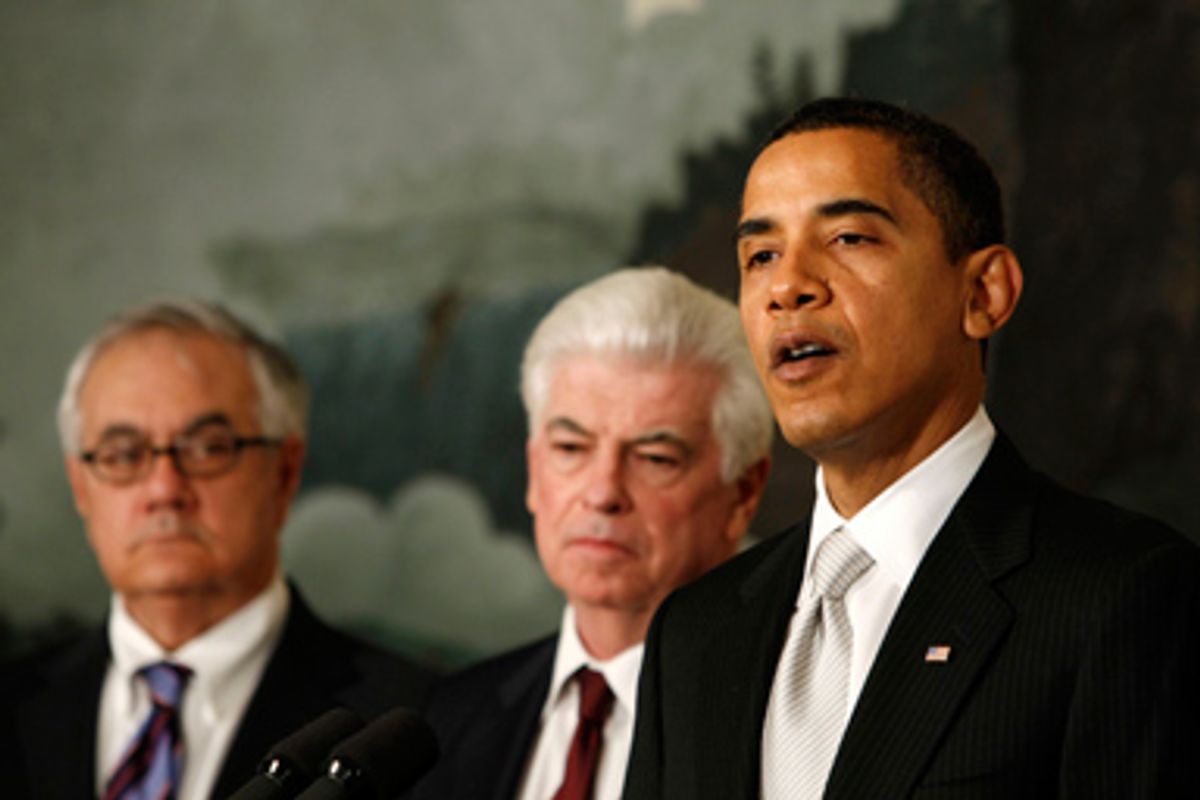 Earlier this week, I noted that the Senate had passed -- with Obama's support -- a pernicious amendment to the spending supplemental bill, jointly sponsored by Sens. Lindsey Graham and Joe Lieberman, that empowers Obama and the Pentagon, at their sole discretion, to suppress any "photograph taken between September 11, 2001 and January 22, 2009 relating to the treatment of individuals engaged, captured, or detained after September 11, 2001, by the Armed Forces of the United States in operations outside of the United States."  The amendment has no purpose other than to expressly allow the President to conceal evidence of war crimes (torture) and to block the Supreme Court from ruling (as two federal courts have already held) that the Freedom of Information Act compels disclosure of those photographs.  For more on why this new secrecy law is so dangerous, see my post here; even The Washington Post Editorial Page excoriated the amendment and Obama's support for it.

When I wrote about this several days ago, the Senate had passed the Graham-Lieberman secrecy law as an amendment to the spending supplemental bill (which includes funding for Iraq and Afghanistan) without even bothering to take a formal roll call vote (on a voice vote).  Although the House version of the supplemental bill did not contain this amendment, it was widely expected that it would simply be inserted in the House-Senate conference and then easily passed along with the final bill.

But passage of Graham-Lieberman now appears much less certain because of what appears to be the refusal of some key liberal House Democrats -- including Barney Frank -- to support it.  The votes of liberal House Democrats actually matter (for once) because most House Republicans are refusing to support the overall supplemental bill due to their objections to a provision for $5 billion in funding to increase the IMF's lending capacity.  To pass the supplemental spending bill, House leaders need the votes of numerous House Democrats who are currently refusing to vote for anything that contains the photo suppression amendment.  If Congressional Democrats succeed in blocking enactment of this amendment, that would be a critical assertion for the first time of Congressional checks on Obama's desired powers and would, independently, prevent a truly odious new secrecy power from being enacted.

First there is this report, yesterday, from Congress Daily:

Democratic leaders postponed a House-Senate conference meeting they hoped would produce a compromise fiscal 2009 war supplemental spending bill Thursday after it appeared they might not have enough votes to pass the measure in the House. . . .

Democratic leaders are counting on convincing 18 of 51 self-described liberal or progressive Democrats who previously opposed the supplemental to now support it, enough Caucus members to ensure its passage. . . .

But liberal Democrats are threatening to withhold their support for the supplemental if it includes a provision in the Senate-passed bill that would allow Defense Secretary Robert Gates to withhold any "photograph relating to the treatment of individuals engaged, captured, or detained after September 11, 2001, by the Armed Forces of the United States" if he certifies that the release of the photos could endanger citizens or the armed forces.

The provision, which is supported by President Obama, was offered as an amendment by Sen. Joseph Lieberman, I-Conn.

Rep. Barney Frank, D-Mass. -- who initially opposed the package and is now trying to help Democratic leaders raise support for it -- said he recently told Treasury Secretary Timothy Geithner that liberal Democrats would not likely support the package if it includes the Lieberman amendment.

"I made it clear to the administration that I believe that we can get liberals like myself who are against the war [to] vote for it because the IMF is so important, but not if the [Freedom of Information Act] exception is in it," Frank said.

Rep. Louise Slaughter, D-N.Y., previously supported the supplemental but said she would not vote for the bill if it includes the amendment.

"There is no reason in the world for us to vote to suspend" FOIA, Slaughter said.

While House Defense Appropriations Subcommittee Chairman John Murtha, D-Pa., conceded "we got big problems" with trying to pass the supplemental, he asserted that it would clear Congress by July 1. The military has said it needs the funding by July to avoid a disruption in other accounts, which would have to be raided to pay for the wars in Iraq and Afghanistan.

Bolstering that report, Jane Hamsher yesterday spoke with Barney Frank, who told her that continued inclusion of the Graham-Lieberman photo suppression amendment would prevent House leaders from getting the votes they need to pass the supplemental bill (either that, Frank said, or they would be forced to remove the IMF funding provision -- which Obama promised G-20 allies -- in order to re-attract GOP votes and then pass the bill with the Graham-Lieberman amendment included but without the IMF funding).

It would seem that Nancy Pelosi has a special obligation to ensure that the House bill does not include the Graham-Lieberman amendment.  Despite her vocal support for a "Truth Commission" to investigate Bush crimes, she has been continuously accused of enabling the Bush administration's torture regime by helping to keep it a secret and doing nothing to impede it.  If she ends up voting for the supplemental spending bill (as she will) which includes a provision allowing the indefinite suppression of photographic evidence of torture, that would certainly bolster those accusations.  Having been briefed early on to some still-disputed extent on the Bush torture regime, does Pelosi now want to vote to vest the Pentagon with the unreviewable power to suppress evidence of torture even where FOIA compels its disclosure?

If, as Obama claims, there are legitimate reasons to suppress these photos under FOIA's exemptions (including its very broad national security exemptions), then the Supreme Court can reverse the two lower court rulings ordering disclosure -- as Obama is asking it to do.  But there is no good reason to vest the Obama administration with the unilateral power to simply waive FOIA requirements simply because it loses in court and decides it doesn't want to comply with court rulings and with current transparency laws.

FOIA was enacted by Congress in 1966 -- more than 40 years ago -- and, in 1974, Congress overrode a presidential veto (.pdf) of amendments that expanded its disclosure requirements in the wake of Nixonian secrecy abuses.  Congress should defend and insist on presidential compliance with the important transparency law it passed and repeatedly strengthened -- not allow the White House and Republicans to jointly render it illusory by retroactively narrowing its provisions, all because the Obama White House wants to suppress evidence of Bush's war crimes in the face of clear FOIA requirements compelling disclosure.

I hope to post some information in just a little bit about which members of Congress should be called today by those who want to see House Democrats stand their ground. Preventing passage of the Graham-Lieberman amendment would be an important step both for transparency and the re-assertion of Congressional checks on still-expanding presidential powers and secrecy abuses.

UPDATE:  As Jane Hamsher noted after speaking with Barney Frank yesterday (read Jane's analysis here), the White House and House Leadership are now working jointly to convince 18 House Democrats who currently oppose the bill [H.R 2346] to vote for it.  That's how many are needed to ensure its passage.  You can call those key members -- here -- and encourage them to continue to oppose this bill, particularly as long as it contains the FOIA-eroding, torture-protecting Graham-Lieberman photo suppression amendment.  Those interested can and should call as many members as possible, and it's particularly important if any of them are your actual representatives.  It would also be helpful, once you call, to use the program provided to convey what you were told as each member's response to your call.

UPDATE II:  Nick Baumman of Mother Jones cheers the efforts of House Democrats to block this amendment and writes:

The photo suppression bill is an abomination that is reminiscent of the worst Bush-era excesses. It gives the executive branch the power to withhold an entire category of information from public scrutiny without any review. This law is Example A of the theory of the Presidency that says citizens should just trust the benevolent executive to do the right thing. Even if you oppose releasing some of the photos, I don't see why you would want to give the White House the power to unilaterally decide what's best. It says a lot about the Congress that members are willing to give Obama this kind of power. It says a lot about Obama that he supports this bill.

Exactly.  We already have a law in place -- FOIA -- that is incredibly permissive in what it allows the government to keep secret.  Obama is perfectly within his rights to appeal the two court decisions ruling that these photographs must be disclosed under FOIA.  But passing a new law because you don't want to abide by the old one and because courts have rejected the President's claimed powers was one of the most defining and abusive strategies of the Bush administration.  The fact that this proposed amendment vests unilateral, unchallengeable power in the Pentagon to decide, with no review and standards, what will remain secret makes it all the worse.

The issue is not whether disclosure of these photographs will produce value (although given that we are in the midst of an ongoing debate over both torture and accountability for it, it seems obvious that there is great value in having more evidence released showing how brutal and lawless our Government's treatment of detainees was).  But that isn't the issue.  The issue is whether or not you believe in transparency in government (a major plank of Obama's campaign), and whether you want the President to have the unilateral, unreviewable power to simply decree that the 4o-year-old FOIA law need not be complied with when it comes to all photographic evidence of detainee abuse.