Just as they did with CIA reports on WMDs, Bush officials pressured DOJ lawyers to issue torture-authorizing memos.

The New York Times was provided 3 extremely important internal Justice Department emails from April, 2005 (.pdf) -- all written by then-Deputy Attorney General Jim Comey -- which highlight how the Bush administration's torture techniques became legally authorized by Bush lawyers.  As Marcy Wheeler documents, the leak to the NYT was clearly from someone eager to defend Bush officials by suggesting that Comey's emails prove that all DOJ lawyers --- even those opposed to torture on policy grounds -- agreed these techniques were legal, and the NYT reporters, Scott Shane and David Johnston, dutifully do the leakers' bidding by misleadingly depicting the Comey emails as vindication for Bush/Cheney (Headline:  "U.S. Lawyers Agreed on the Legality of Brutal Tactic"; First Paragraph: "When Justice Department lawyers engaged in a sharp internal debate in 2005 over brutal interrogation techniques, even some who believed that using tough tactics was a serious mistake agreed on a basic point: the methods themselves were legal").

I defy anyone to read Comey's 3 emails and walk away with that conclusion.  Marcy has detailed many of the reasons the NYT article is so misleading, so I want to focus on what the Comey emails actually demonstrate about what these DOJ torture memos really are.   The primary argument against prosecutions for Bush officials who ordered torture is that DOJ lawyers told the White House that these tactics were legal, and White House officials therefore had the right to rely on those legal opinions.  The premise is that White House officials inquired in good faith with the DOJ about what they could and could not do under the law, and only ordered those tactics which the DOJ lawyers told them were legal.  As these Comey emails prove, that simply is not what happened.

The DOJ torture-authorizing memos are perfectly analogous to the CIA's pre-war intelligence reports about Iraq's WMDs.  Bush officials justify their pre-war statements about WMDs by pointing to the CIA's reports -- as though those reports just magically appeared on their desks from the CIA -- when, as is well documented, Dick Cheney and friends were continuously pressuring and cajoling the CIA to give them those threat reports in order to supply bureaucratic justification for the attack on Iraq.  That is exactly how the DOJ torture-authorizing memos came to be:  Dick Cheney, David Addington and George Bush himself continuously exerted extreme pressure on DOJ lawyers to produce memos authorizing them to do what they wanted to do -- not because they were interested in knowing in good faith what the law did and did not allow, but because they wanted DOJ memos as cover -- legal immunity -- for the torture they had already ordered and were continuing to order.  Though one won't find this in the NYT article, that is, far and away, the most important revelation from the Comey emails.

Just read the Comey emails for yourself -- they're not long -- and you'll see exactly how these DOJ torture memos were actually produced.  The key excerpts tell the story as clearly as can be.  Comey was vehemently opposed to a draft memo written by Acting OLC Chief Steven Bradbury -- ultimately dated May 10, 2005 (.pdf) -- that legally authorized the simultaneous, combined use of numerous "enhanced interrogation techniques" on detainees.  This "combined techniques" memo was crucial because these were the tactics that had already been used on detainees, and -- after the prior OLC memos authorizing those tactics were withdrawn -- the White House was desperate for legal approval for what they had already done and what they wanted to do in the future.

Comey begins by noting that OLC lawyer Patrick Philbin had expressed numerous objections to the Bradbury memo -- all of which were being ignored in the rush to give the White House what it wanted: 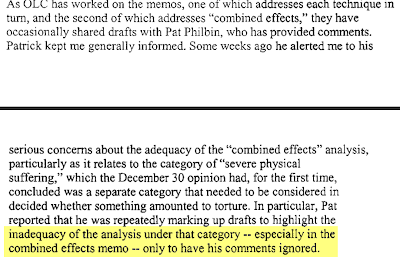 Comey then noted that he, too, had "grave reservations" about the DOJ legal opinion:

Does that sound to you like there was unanimity in the DOJ about the legality of these methods?

As a result of his objections, Comey went to Attorney General Alberto Gonazles to urge that the memo not be approved, but Gonzales told him that he was under extreme pressure from Dick Cheney, David Addington, Harriet Miers -- and even Bush himself -- to get these memos issued:

Comey urged Gonzales to stop the approval of the "combined techniques" memo, warning it would "come back to haunt him":

The following day, Comey noted that the loyalty of DOJ lawyers lay with the White House, not with the Justice Department, and they were thus willing to comply with the demands of Cheney and Addington even at the expense of their duties as DOJ lawyers:

Most revealingly, Comey described exactly what was happening with this process:  that the White House was demanding and pressuring the issuance of these memos, but that once the torture regime became public -- as Comey warned that it would -- White House officials would defend themselves by heaping the blame on Gonzales and other DOJ lawyers, deceitfully pretending that they were merely following in good faith DOJ advice about what was and was not legal: 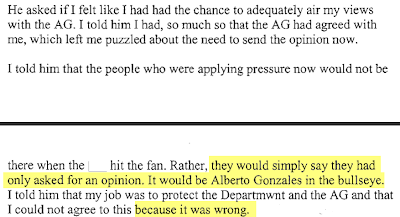 Alluding to the extreme pressure that had previously been exerted by the White House on then-AG John Aschroft to legally authorize the illegal NSA spying program (the Ashcroft Hospital Drama), Comey lamented that even the minimal willingness of Ashcroft to defy White House pressure was completely lacking in the Gonzales-led DOJ and OLC -- meaning the White House was able to get legal authorization from the DOJ for whatever it wanted, regardless of whether it was actually legal:

This battle over these torture memos was occurring in preparation for a White House Principals Meeting -- to be attended by key Bush cabinet members -- to decide which interrogation tactics they would authorize.  As Comey notes, White House officials knew full well that what they were authorizing and ordering were, in his words, "simply awful" -- as illustrated by the cowardly demand from Condoleezza Rice that the tactics they were to approve not be discussed in any detail at the meeting (click to enlarge):

Comey notes that there was a videotape of at least one of the interrogation sessions that would ensure that the full brutality of what they authorized would come to light -- but those videotapes, of course, were destroyed by the CIA in an act which even the 9/11 Commission co-Chairmen called "obstruction of justice."

Ultimately, Comey's pleas that Gonzales block approval of these tactics were ignored.  Despite Gonzales' conveying Comey's arguments about how history would judge what they were doing, the White House Principals -- yet again -- approved all of the torture tactics in those memos:

It's worth noting that all of the officials involved in these events -- including Comey -- are right-wing ideologues appointed by George Bush.  That's why they were appointed.  The fact that Comey was willing to go along with approval of these tactics when used individually -- just as is true of his willingness to endorse a modified version of Bush's NSA warrantless eavesdropping program in the face of FISA -- hardly proves that there was a good-faith basis for the view that these individual tactics were legal.

But the real story here is obvious -- these DOJ memos authorizing torture were anything but the by-product of independent, good faith legal analysis.  Instead, those memos -- just like the pre-war CIA reports about The Threat of Saddam -- were coerced by White House officials eager for bureaucratic cover for what they had already ordered.  This was done precisely so that once this all became public, they could point to those memos and have the political and media establishment excuse what they did ("Oh, they only did what they DOJ told them was legal"'/"Oh, they were only reacting to CIA warnings about Saddam's weapons").  These DOJ memos, like the CIA reports, were all engineered by the White House to give cover to what they wanted to do; they were not the precipitating events that led to and justified those decisions.  That is the critical point proven by the Comey emails, and it is completely obscured by the NYT article, which instead trumpets the opposite point ("Unanimity at DOJ that these tactics were legal") because that's the story their leaking sources wanted them to promote.

What's most ironic about what the NYT did here is that on the very same day this article appears, there is a column from the NYT Public Editor, Clark Hoyt, excoriating the paper for having published a deeply misleading front page story by Elizabeth Bumiller, that claimed that 1 out of 7 Guantanamo detainees returned to "jihad" once they are released.  That happened because Bumiller followed the most common method of modern establishment reporting:  she mindlessly repeated what her government sources told her to say.  As Hoyt put it:

But the article on which he based that statement was seriously flawed and greatly overplayed. It demonstrated again the dangers when editors run with exclusive leaked material in politically charged circumstances and fail to push back skeptically. The lapse is especially unfortunate at The Times, given its history in covering the run-up to the Iraq war.

That is exactly what Shane and Johnston did with these Comey emails.  Just as Bumiller did, they included some contrary facts buried deep in the article about Comey's objections, but the headline and the way the entire article was framed will create the impression -- as intended -- that there was unanimity among DOJ lawyers regarding the legality of the Bush interrogation program.  Other journalists, too slothful to read the Comey emails themselves, will get the message and go forth and repeat it, and it will soon be conventional wisdom that "everyone" at the DOJ agreed these torture techniques were legal.   Already this morning, here is George Stephanopolous' Twitter reaction to the NYT story:

Any rational and minimally well-informed person who actually read the Comey emails would walk away with the exact opposite point -- what is "stunning" was how extreme was the pressure from the White House to issue these memos and how compliant DOJ lawyers were to White House dictates.   But that's how our media works:  anonymous government officials tell them what to say; they write it down uncritically; and it then becomes conventional wisdom regardless of how false it is.