The White House needs to fight for healthcare

Here are three things to watch for to see if the White House or Big Pharma and the insurers are winning. 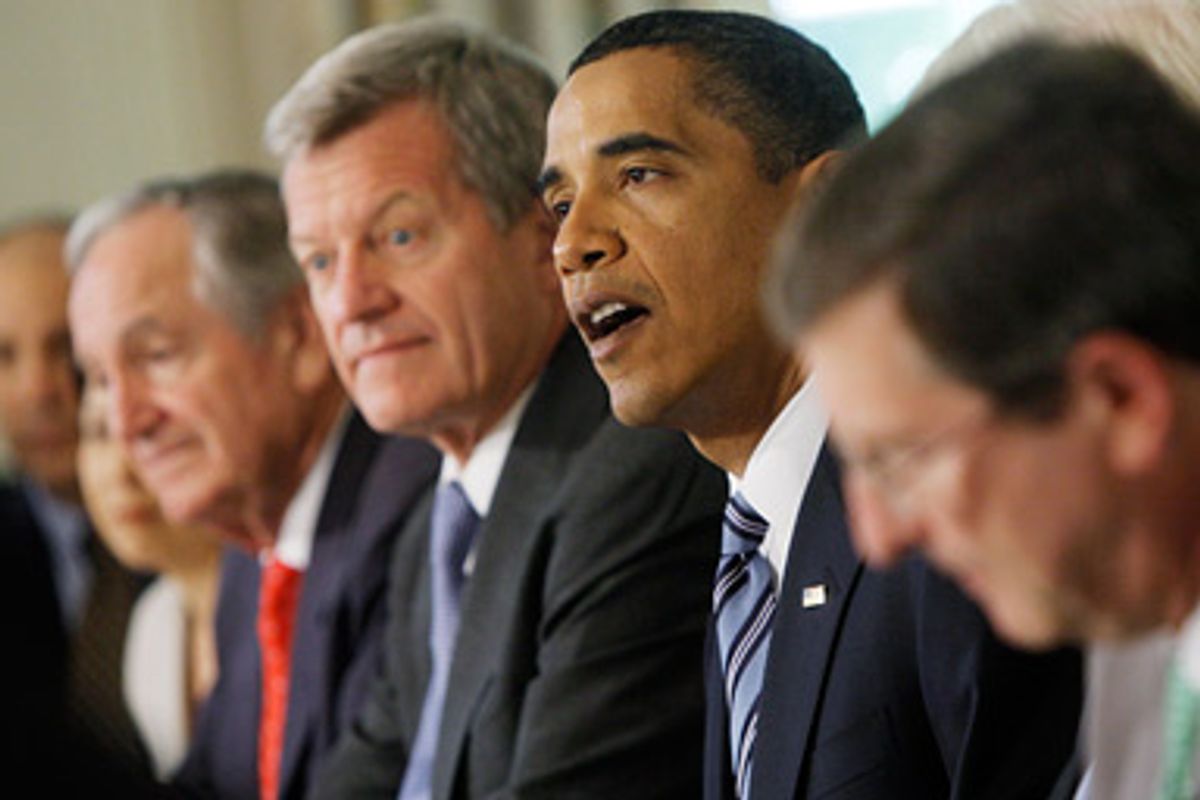 In an interesting piece in Sunday's New York Times Magazine, Matt Bai suggests that the White House has learned the main lesson of Bill Clinton's failed attempt at universal healthcare, which is not to deliver a finished product to Congress but instead give Congress a set of goals and let it decide how to reach them.

The question to my mind is whether the Obama White House has over-learned that lesson. Without strong White House leadership, individual members of Congress are particularly susceptible to the threats and promises of powerful lobbies. A statement of White House goals that leaves the details to Congress will likely result in legislation that superficially meets those goals but whose details undermine them. That's the biggest danger now with the inchoate healthcare legislation.

Fortunately, the White House now intends to get more involved in the emerging healthcare bill. Following are the three biggest issues where powerful lobbies on the other side are working the details to their advantage. The question is how hard the Obama White House will push back.

1. A real public option or a public option in name only? Big Pharma and Big Insurance are dead against, and are pressuring lawmakers. Republicans are also opposed. The president said he wants a public option. But the real question is whether he'll be willing to allow the public option to be watered down into essentially nothing (broken up into regional or state-run plans, or required to charge the same as private insurance, or triggered only if private insurers and Pharma fail to bring down costs and extend coverage). If the president wants Republicans on board even though he doesn't need them (the bill requires only 51 Senate votes), he will have to buy a watered-down version.

2. A requirement that all businesses "pay or play," or a broad exemption for smaller businesses? Most emerging versions of the bill require employers to supply health insurance for workers or contribute to the cost of a plan but exempt small employers. The issue to watch is how "small employers" are defined -- and how many, as a result, won't have to either pay or play. Small business lobbies are all over the Hill arguing for a broad exemption. Republicans agree. The White House will have to push back very hard to include enough businesses to make "pay or play" work.

3. Additional tax revenues from taxing employer-provided benefits on higher incomes or from limiting deductions on higher incomes? Congressional Dems originally nixed the second and haven't supported the first. Organized labor is dead-set against taxing any employer-provided health benefits because it doesn't want to set a precedent that might someday erode all such benefits. Accordingly, the White House is signaling it won't take this route. Yet there's powerful resistance on limiting deductions for higher incomes, from many of the beneficiaries of these deductions (such as big charities and state and local governments). Unless the White House demands that those deductions be limited for all taxpayers earning over $250,000 a year, adjusted for inflation in future years, it won't have enough revenue to support the overall bill.

So the question right now is how hard the president will push to get a real public option, a broad mandate and enough revenues to support universal healthcare. The Republicans are showing remarkable unity, as they did on the stimulus package and the budget. Yet the president seems intent on a bipartisan bill. Meanwhile, Pharma, insurance, charities, state and local governments and labor are all putting maximum pressure on individual Democrats. Yet the president seems wary of twisting arms. What's the result? Keep your eyes on the details.