The media loves the "wrong speed" theory, but a lightning strike and electrical failure are more likely culprits. 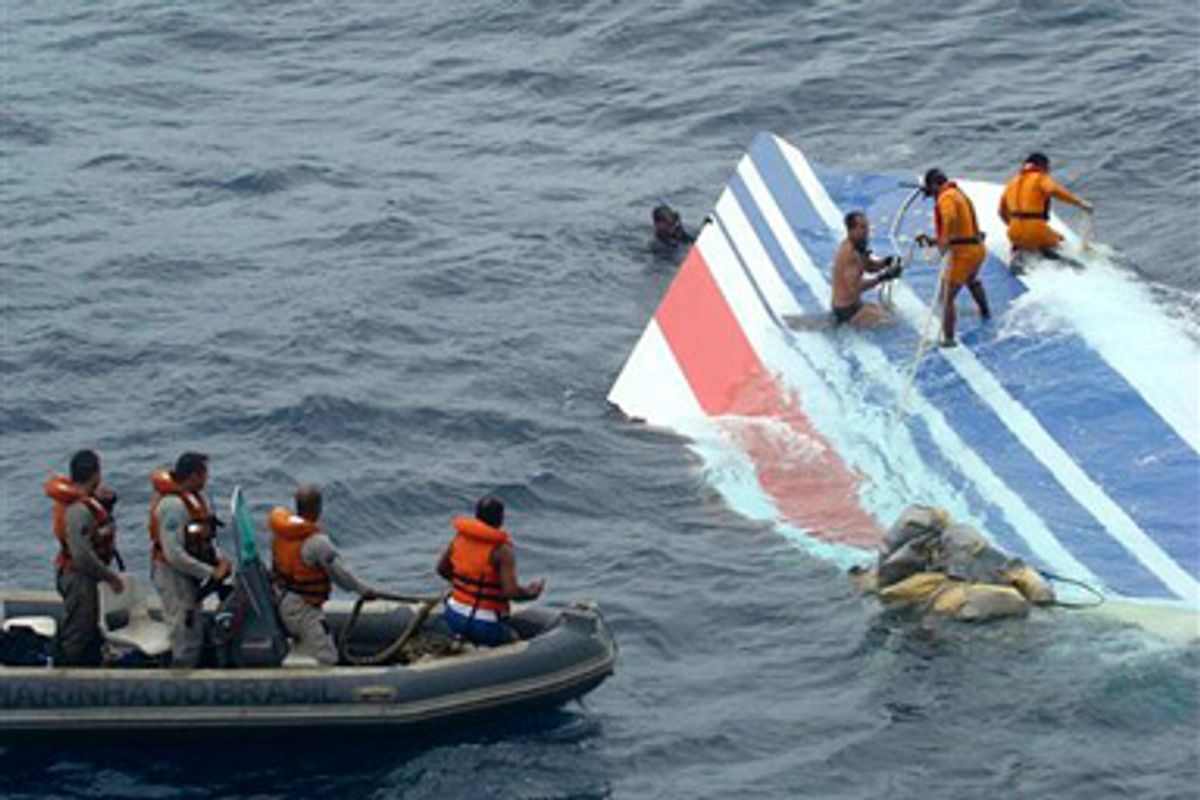 In this photo released by Brazil's Air Force, Brazil's Navy sailors recover debris from the missing Air France jet at the Atlantic Ocean, Monday, June 8, 2009. A U.S. Navy team was flying to Brazil on Monday with high-tech underwater listening devices to help the search for the black boxes from an Air France plane that crashed into the Atlantic Ocean.
--

The gist of the accident appears pretty clear: Air France Flight 447 was victimized by a terrible storm.

How the airplane got into this storm, and what exactly happened once it got there, are two fascinating if perhaps unanswerable questions. The plane's flight data recorder and cockpit voice recorder -- the proverbial black boxes -- are apparently lodged amid undersea mountains, beneath thousands of feet of water. They may stay there forever.

And so we are left to speculate -- as to how an experienced crew, at the controls of a $100 million jetliner, could have found itself in such deadly circumstances.

Pilots are well aware of the dangers posed by thunderstorms -- extreme turbulence, windshear, lightning and hail. From their very first flying lesson they are trained to avoid them. And they do. There are no daredevils in a professional airline cockpit -- no pressure to push on through, no macho risk-taking. Pilots are not on a suicide mission, and will not put themselves, their passengers or their aircraft in jeopardy. Take my word for it, a crew will sooner divert or return to the departure point before it plunges into a violent storm.

I have a hard time believing the Air France pilots would have been so reckless as to fly into an area of expectedly violent conditions.

And, as I wrote last week, thunderstorms in the notorious intertropical convergence zone (ITCZ), where Air France met its fate, tend to be large, tall and powerful. But they also tend to be isolated and comparatively easy to circumnavigate. I fly through the ITCZ pretty regularly. Honestly, I'd rather deal with thunderstorms in that region than at higher (or lower) latitudes, where they tend to be embedded and more insidious.

So what in the world happened?

It's tough to say, but one of the most fascinating things I've come across since the accident is the graphic seen at the top of this column. You can also view it here, Figure 12 about two-thirds of the way down the page.

This "probable radar depiction image" was created by Tim Vazquez of WeatherGraphics.com. It uses satellite data to replicate what the pilots of Air France 447 were probably looking at on their on-board radar screen as they approached the area of weather.

Bypassing this line of storms altogether would have incurred a long detour to the west. Meanwhile, note the contours of what they had in front of them. It's possible to stay in the green (lighter precipitation and less turbulence, presumably) the whole way through. Other visual cues that indicate danger -- scallops, fingers, hooks, areas of attenuation -- look to be avoidable.

It was going to be rough, no doubt, and we'll never know for sure what their radar screens actually showed. But if the graphic is close to accurate, it becomes easier to understand why they went on through. It was a borderline call, but not a crazy one.

Once they were inside, threading that needle, something happened. What, precisely, we don't know, but it certainly wasn't anything they were expecting.

To be honest, conditions in the vicinity of storms aren't always easy to predict, and no, not every cumulonimbus cell is successfully skirted. Things can change fast and nasty weather can sometimes close in around you. Passengers see the occasional flash of lightning and feel the occasional jolt of turbulence on those occasions when things turn out rougher than expected.

Rarely, though, do conditions become outright dangerous. This may have been an exception, a perfect storm, if you will.

My hunch is that an unusually potent lightning strike set off a cavalcade of serious electrical problems. As reviewed in this column last week, airplanes are hit by lightning fairly frequently. Although strikes aren't normally hazardous, when trouble does occur, it tends to affect the electrical system.

According to automatic status messages relayed from the airplane to its maintenance staff in Paris, the plane suffered a loss of its Air Data Inertial Reference Unit (ADIRU) and Integrated Standby Instrument System (ISIS). Other messages told of a degraded condition in the jet's high-tech, fly-by-wire flight control system (evidently triggered by multiple electrical faults) and what seems to have been a loss of cabin pressure.

In layperson's terms, they were losing the ability to maintain speed, altitude and pressurization as well as some of their maneuverability. Under different conditions, these malfunctions aren't liable to be catastrophic. But in the throes of a storm, in darkness, it's a different story. Eventually there was total loss of control, and the plane hit the ocean in one or more pieces.

Crew incapacitation (hypoxia as a result of the decompression) is another possible factor. On the A330, the model of airplane that crashed, loss of cabin pressure can result from certain electrical failures. So the automated status message indicating depressurization may not have been a structural issue or indicator of an in-flight breakup, as many have purported.

The crew was dealing with the loss of important instruments and controls. There would be confusion at this point, with warnings going off, messages flashing and some very urgent troubleshooting. If, as part of the mix, the cabin had suddenly decompressed, it may not have been noticed right away. Without use of supplemental oxygen, the pilots would have had about 30 seconds of useful consciousness -- maybe less.

Could they have passed out? The autopilot was off at this point, and in powerful gusts the plane could have quickly gone out of control.

Some have also posited the idea of engine failure -- the loss of one or even both engines -- caused either by hail ingestion or extreme turbulence. This could explain the loss of cabin pressure and even the loss of control. Gliding, without engines or primary instruments, is relatively easy in calm, daylight conditions, as Capt. Sullenberger showed us. But this was another situation entirely.

And over the past few days, the media has become fixated on a report that the pilots were operating at the "wrong speed" as they penetrated the bad weather. Commercial aircraft have a so-called "turbulence penetration speed" that helps ensure structural integrity and controllability during very rough air. Of course, maintaining a precise speed can be difficult under such conditions, and any discrepancy was probably a symptom of other internal failures (see electrics, above) and not by itself a cause of the accident. The news has really jumped on this topic, but I'm wary of how relevant it might be.

The speed discrepancy has been traced to the possible failure of one or more of the plane's so-called "pitot tubes" during unusually heavy icing conditions. These tubes -- among the many sundry probes, ports and sensors that dot a jetliner's exterior -- help determine airspeed. Conceivably, a pitot malfunction could have caused very serious problems and, if taken to the extreme, loss of the aircraft.

All exterior probes are heated, however, and ice accretion would have to have been particularly rapid and intense to overcome them. This was possible, but not likely. If they iced over, I suspect it was due to one or more electrical failures occurring first. Again, a symptom and not a cause.