A warning for Democrats?

The right just won all across Europe, thanks to nationalism, populism and recession. It could happen here too. 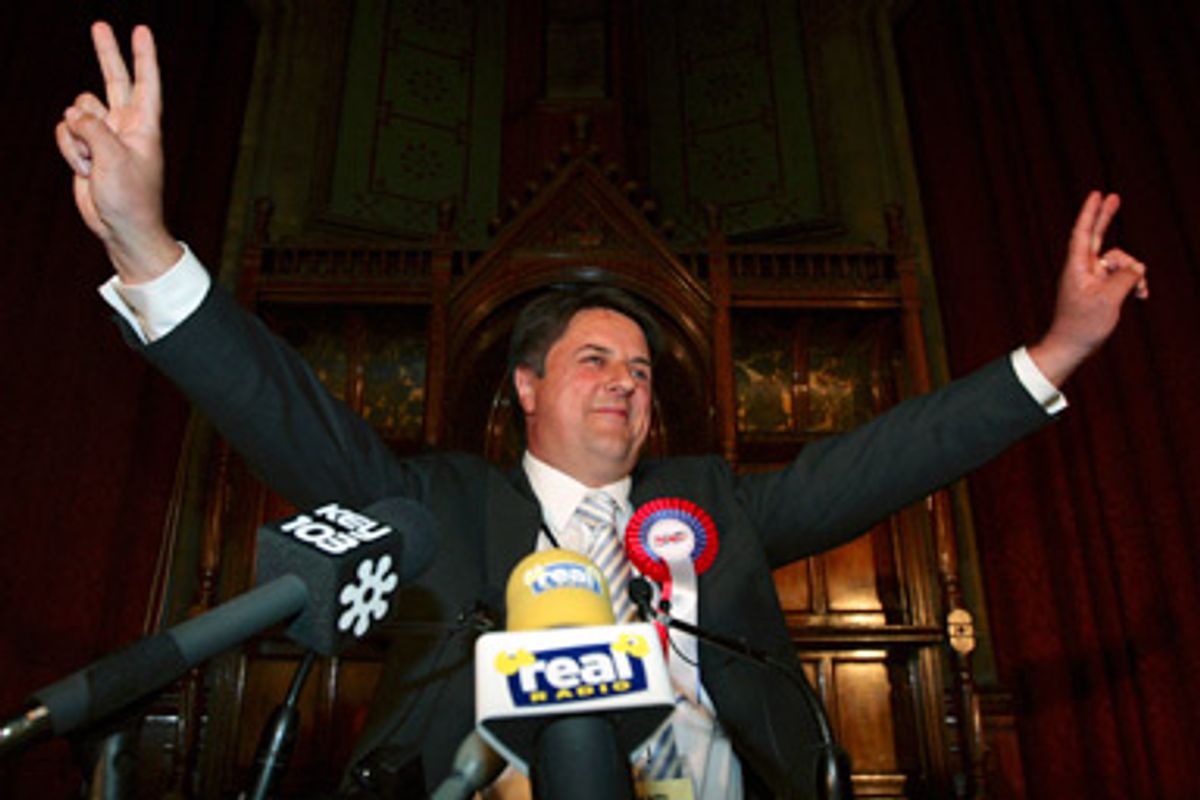 Leader of the British National Party Nick Griffin gestures after he won a seat in the European Parliament at the Town Hall in Manchester, northern England June 8, 2009.
--

The populist backlash that many have predicted would follow the crash of 2008 is here. Well, not here, exactly. Over there, in Europe.

In the June 7 elections to the European Parliament, center-left social democrats were devastated, while far-right nationalist and populist candidates made big gains. The center-left fell from 217 seats to 159, while the center-right coalition remained the largest bloc with 267 seats.

The biggest story involves the gains by a variety of extreme-right parties, many of which combine populist nationalism with hostility to immigration for ethnic or economic reasons. The far-right British National Party (BNP), whose leader Nick Griffin claims that "indigenous" white Britons are "second-class citizens" in their own homeland, won a seat in the European Parliament for the first time. Other nationalist, anti-immigrant parties picked up seats in Denmark, the Netherlands, Austria, Hungary, Finland, Romania and Greece.

Even so, symbolism counts for something. And what these results symbolize is that many in Europe are turning to parties of the right, not of the left, to express their anger over the suffering caused by the Great Recession.

There is an ominous precedent for this, of course. The Great Depression in Europe brought to power the National Socialists in Germany and other xenophobic nationalist parties and movements. Many of these were anti-Semitic, identifying Jews with both international capital and international socialism and claiming to protect ordinary workers and citizens from conspirators in Wall Street and Moscow.

There is no reason to fear the replacement of democracy by dictatorship in today's Europe, much less war or genocide. And hostility to Muslim immigrants, more than anti-Jewish ideology, is central to the European far right's bids for popularity. So lurid visions of a new Axis arising should be dismissed.

Instead, if the European elections are harbingers of national elections yet to come in various European countries, we might soon see a democratic but conservative Europe dominated by parties of the right that use populism and nationalism to cement their electoral dominance and marginalize social democrats and classical liberals. If so, then as a result of the Great Recession, the European center-left may find itself in the political wilderness -- with only itself to blame.

After the end of the Cold War, many former socialist internationalists in Europe, particularly those associated with the "third way" of Tony Blair, replaced their socialism with capitalism but kept their ideological internationalism. Having opposed the nation-state in the name of the international proletariat, they now opposed the nation-state in the name of globalization. This was not as much of a break with the radical left as it may seem. After all, Karl Marx, in an 1848 speech in Brussels, had declared: "But in general, the protective system of our day is conservative, while the free trade system is destructive. It breaks up old nationalities and pushes the antagonism of the proletariat and the bourgeoisie to the extreme point. In a word, the free trade system hastens the social revolution. It is in this revolutionary sense alone, gentlemen, that I vote in favor of free trade." Post-Marxist neoliberals dropped revolution and class war but retained the idea that global capitalism is progressive because it "breaks up old nationalities."

Multinational corporations and investment banks, according to these reformed leftists, would play the revolutionary role they had earlier assigned to third-world revolutions and workers' movements in the developed world. Economic globalization, guided by enlightened pro-market progressives rather than callous conservatives, would break down national, racial and class barriers and create a single global community. The center-left was redefined to mean Thatcher-Reagan neoliberalism plus a slightly more generous safety net for those displaced in the glorious march toward a single global free market.

Thanks to the morphing of many international socialists into champions of international capitalism, some of the most ardent advocates of free trade and economic deregulation nowadays can be found on the center-left. At a recent summit that I attended in Chile in advance of the G-20 summit, center-left elected officials and thinkers from Europe, Latin America and North America, some of them veterans of Marxist politics in the 1960s and 1970s, sounded like the Wall Street Journal editorial page, so vigorous were their denunciations of "protectionism" in any form, particularly "Buy American" provisions. A few years ago, I dined with a leading French socialist who opined that, now that national barriers to the free flow of capital and goods have been largely eliminated, the next barrier to go should be national immigration laws that prevent the free flow of labor across borders.

Indeed, it has become something of an orthodoxy among bien pensant progressives on both sides of the Atlantic that territorial nation-states are immoral because they privilege the identity of one cultural nation over others (the nation part) and because they favor the well-being of their citizens over foreigners who may be poorer (the territorial state part). Most progressives favor ending agricultural subsidies in Europe and the U.S., claiming that this would help poor peasant farmers in the global South export their way to prosperity (of course this would really benefit multinational agribusiness, not romanticized peasant farmers, but never mind). In debates about immigration, as in debates about trade, elite progressives whose own positions and incomes are secure frequently demonstrate their altruism by suggesting that it is acceptable if immigration somewhat lowers the wages of their less-fortunate fellow nationals, as long as poor foreign immigrants and receivers of remittances are thereby made better off. How generous of them!

The new pro-capitalist, anti-nationalist center-left finds allies in investment banks and college campuses but has little to offer ordinary people who view the nation-state as their agent and protector in a dangerous world. Nobody should be surprised when, in a period of economic crisis, significant parts of the population should turn to unabashed nationalists of the right, as opposed to progressives who fret that helping out their fellow citizens might be a form of discrimination against more deserving foreigners. It's true that toxic forms of racism and illiberal nationalism drive the anti-immigrant politics of the far-right parties that have benefited from protest voting in Europe. But the economic case for limiting the inflow of new workers into an economy at a time of mass unemployment is likely to seem commonsensical to many non-racist voters who do not share the new center-left's unease with national patriotism.

Should the Democratic Party be concerned? The situation in the U.S. is different from that in Europe in many ways. The tensions over large-scale Latino immigration to the U.S. are minor compared with those over large-scale Muslim immigration to Europe. Libertarianism is far stronger in the U.S. than in Europe, so that right-wing protest is as likely to be channeled through libertarians like Ron Paul as through nativists like Patrick Buchanan. And Barack Obama frequently appears in public standing in front of not one but several gigantic American flags.

Still, I think Democratic strategists should be worried about the European election results. The Obama administration has inherited its third-way neoliberalism from Bill Clinton and Tony Blair. Notwithstanding Obama's personal popularity, a synthesis of internationalist idealism and deference to Wall Street is not a sustainable formula for governing during the most severe economic crisis since the 1930s. Nor was the same synthesis popular among American voters back in the Clinton era, when Clinton was only narrowly reelected while the Democrats lost Congress from 1994 to 2006. When the Democrats regained Congress in 2006, it was thanks in large part to the success of populists like Heath Shuler and Jim Webb, who ran left on economics and right on immigration.

The Republicans have been very shrewd in voting not only against the too-small stimulus but also against the Obama administration's expensive and ill-conceived bailout of America's zombie banks. If Larry Summers and Tim Geithner succeed in identifying the Democrats too closely with Wall Street, then the moribund Republicans might be revitalized as a vehicle for anti-establishment populism -- not Hitlerian, but Jacksonian. A Republican comeback might be helped further if Democrats seek to increase immigration at a time of mass unemployment.

If the European elections really do signal a trend, then both the right and left in the U.S. will have to consider what "Europe" symbolizes. Conservatives may have to reconsider their Europhobia and liberals their Europhilia, if "European" politics is identified with economic nationalism and immigration restriction rather than with supra-national institutions and post-national idealism. (Will American conservatives approvingly rename French fries "Patriot fries"?) And in a world where voters even in "enlightened" Europe reject the post-nationalist left, American progressives may reconsider their flirtation with an idealized social democratic EU and try to connect with older American center-left traditions in which liberalism, populism and national sovereignty were thought to be not only compatible but mutually reinforcing.