Defeat of Graham-Lieberman and the ongoing war on transparency

Arguments for suppressing torture photos are grounded in the worst aspects of the Bush/Cheney mindset. 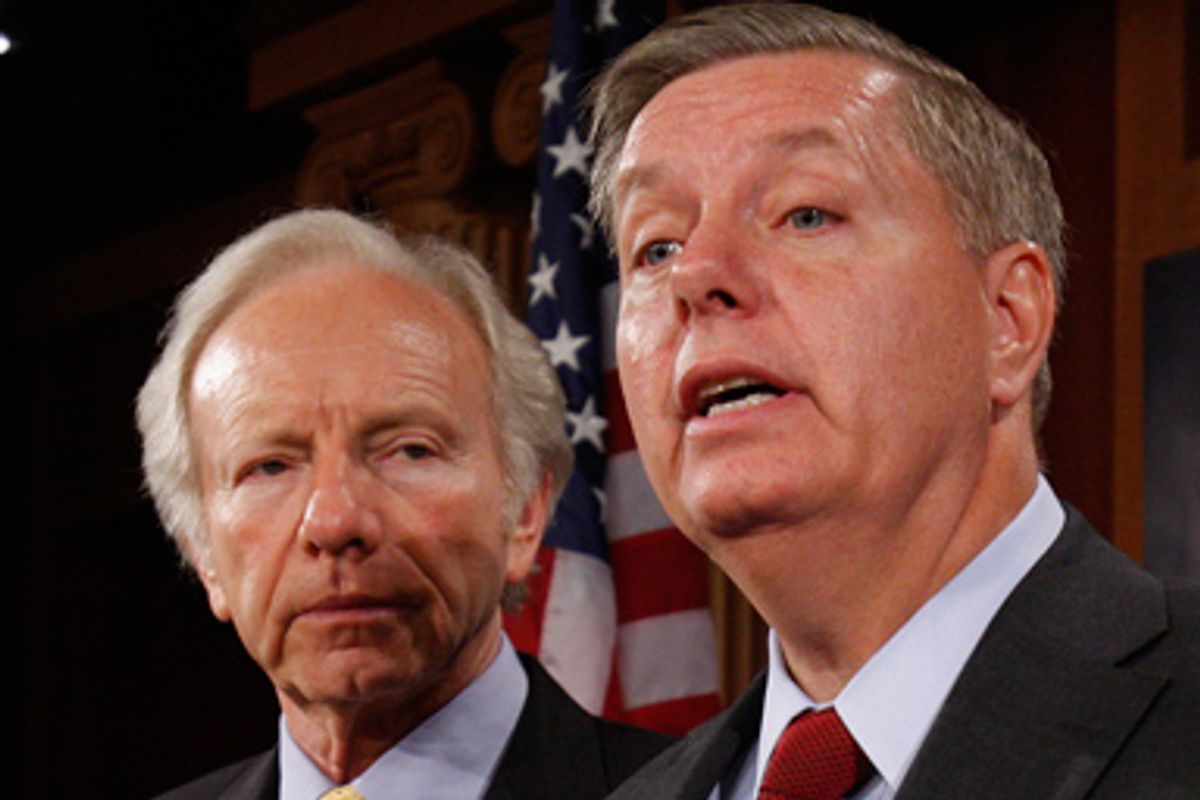 Yesterday, there was a potentially temporary though still quite significant victory for those who believe in open government and transparency:  as Jane Hamsher first reported, House leaders and the White House were forced to remove the Graham-Lieberman photo suppression amendment from the war supplemental spending bill, because widespread opposition to that amendment among progressive House Democrats was jeopardizing passage of the spending bill.  Readers here and those of various blogs who bombarded House members with opposition calls on Friday obviously played an important role in forcing the withdrawal of this pernicious amendment.  Successes of this sort are rare enough that -- even if fleeting -- they warrant some celebration.

Whether there is value in disclosing these specific torture photographs is a secondary issue here, at most [though in light of the ongoing debate in this country over torture and accountability, as well as the irreplaceable value of photographic evidence in documenting government abuses (see Abu Ghraib), the value of these sorts of photographs seems self-evident].  A much more critical issue here is whether the President should have the power to conceal evidence about the Government's actions on the ground that what the Government did was so bad, so wrong, so inflammatory, so lawless, that to allow disclosure and transparency would reflect poorly on our country, thereby increase anti-American sentiment, and thus jeopardize The Troops.  Once you accept that rationale -- the more extreme the Government's abuses are, the more compelling is the need for suppression -- then open government, one of the central planks of the Obama campaign and the linchpin of a healthy democracy, becomes an illusion.

But there's an even more vital issue at stake here.  One of the central objections to the Bush presidency was its claim that we could only Stay Safe from the Terrorists if we fundamentally altered -- diluted and abandoned -- our long-standing political values and legal frameworks.  That argument was repeatedly ridiculed by Obama as a "false choice."  That we can adhere to our long-standing legal institutions and simultaneously remain Safe was a principal prong of his campaign.

Yet the Graham-Lieberman amendment -- which Obama supports -- is nothing but a pure manifestation of the Bush mentality, as its core premise is that we can't remain Safe unless we abandon our decades-old legal framework governing transparency.  The Freedom of Information Act (FOIA) is more than 40 years old.  It vests the Government with extremely broad secrecy powers, especially in the national security realm.  Still, two federal courts -- one district court and a unanimous 3-judge Court of Appeals panel -- have ruled that FOIA compels disclosure of these photographs because none of the FOIA exceptions apply.  Most critically -- as the courts noted -- the fact that information will reflect poorly on the Government is not a legitimate ground for suppressing it.  That is the crux of FOIA, and it is that critical principle which Graham-Lieberman is designed to gut.

Advocates for suppression know full well that the law is against them -- they know that they already lost twice and will almost certainly lose again in the Supreme Court -- because FOIA's clear mandates unquestionably require disclosure of these photos.  That's exactly why they want to pass a new law -- it's why they want to change the decades-old standards governing transparency here -- because they know they should and will continue to lose in court as the law stands.  Here's what Joe Lieberman and Lindsey Graham said yesterday in their unbelievably petulant, foot-stomping joint statement upon realizing that the House was about to delete their amendment:

Let it clearly be understood that without this legislation the photos in question are likely to be released.

In other words, if FOIA's standards are allowed to govern transparency questions -- as has been happening for the last 40 years -- then the photos must be released, because there is no legitimate ground for suppressing them.  So in the name of Fighting the Terrorists, we're going to vest greater secrecy powers in the President and abandon our long-standing legal framework to enable concealment of this information.  Isn't that exactly the mindset which progressives -- and Obama -- bitterly objected to when advocated by Bush/Cheney?  I believe it is.

Just look at the obvious, dangerous precedent being set by those who are advocating for suppression of war crimes evidence.  As I wrote when Obama first announced that he had reversed himself and decided to appeal the Second Circuit's order requiring disclosure of these photos:

Already, this pro-suppression rationale is -- as predicted -- extending to other areas.  The Washington Post reports today that the Obama administration is now urging a federal court to keep concealed all evidence relating to the CIA's (almost certainly illegal) destruction of interrogation videotapes -- including documents showing who ordered the tapes destroyed, what the tapes revealed, the reasons why those decisions were made, etc.  The administration's rationale for that concealment is exactly the same as for concealment of the torture photos:  namely, the administration is "arguing to a federal judge that [disclosure] would endanger national security and benefit al-Qaeda's recruitment efforts."  In other words, anything that reflects badly on the U.S. Government must remain hidden from view, otherwise it will help Al-Qaeda by increasing anti-American sentiment.  Down that road lies full-scale secrecy for all but the most harmless (and meaningless) information about what our Government does.

These arguments for suppressing torture photos and other evidence of government abuses are grounded in the worst aspects of the Bush/Cheney mindset.  Anyone who doubts that should really read the joint Graham/Lieberman statement from yesterday.  It has all the familiar, odious, authoritarian rhetorical tactics of the last eight years:  The Commander-in-Chief has decreed that these photos must be suppressed for us to be Safe, and that presidential decree should end the debate.  Anyone who refuses to comply is causing Americans generally and especially Our Troops to be slaughtered ("release would be tantamount to a death sentence to some who are serving our nation" -- "Transparency, and in this case needless transparency, should not be paid for with the lives of American citizens").  You don't need to know what's in these photos; we've seen them and you can trust us that they must remain secret.

Leave aside the typical, disgusting hypocrisy of the Graham/Lieberman duo, as they feel free to disregard "The Commander-in-Chief's" judgment about what is necessary to Keep us Safe whenever they choose, as they did when they accused Obama of "helping our enemies" by releasing the OLC memos.  The arguments being made here by Graham and Lieberman to justify the new secrecy powers they want to vest in Obama are the same tired, exploitative platitudes -- give us what we want or you will have the blood of American citizens and The Troops on your hands -- that has been used to justify everything from torture and warrantless spying to the war in Iraq and extreme and ever-increasing government secrecy.  Only this time, these tactics are being hauled out on behalf of new powers which the Obama White House, rather than the Bush White House, is demanding.

Open government and transparency are critically important values for their own sake.  That was something Obama himself, during the campaign, repeatedly claimed to believe.  We have a very permissive secrecy law in place -- FOIA -- that enabled us to Stay Safe for decades.  There is no reason to gut it.  As the Supreme Court put it in 2004:

FOIA is often explained as a means for citizens to "know what the government is up to."  This phrase should not be dismissed as a convenient formalism.  It defines a structural necessity in a real democracy.

The Supreme Court pointed out in 1978 that Congress enacted FOIA because it recognized that an informed citizenry is "needed to check against corruption and to hold the governors accountable to the governed."   Seeing the evidence of exactly what the Government did, who did it and what was done about it -- and not allowing the Government to keep its actions secret except in the narrowest of circumstances -- is critically important in its own right.  That is the foundation of open government.

If there are justifiable reasons under FOIA to keep these photos secret, then Obama will win in court.  If there aren't justifiable reasons, then he'll lose -- again -- and the photos should be disclosed.  That's how FOIA is supposed to work.  Adopting the arguments being made to justify cover-up of Bush-era war crimes is to wage war on the concept of transparency itself.  And changing FOIA any time the President decides that government embarrassment must be avoided is to affirm the core Bush/Cheney rationale:  we cannot Stay Safe unless we gut our long-standing legal frameworks.  That's what Graham/Lieberman -- and the pernicious rationale underlying it -- is designed to do, and, if accepted, it will inevitably spread to justify suppression in many other areas.  Indeed, it is already doing so.

The breakdown of these debates along these lines is the opposite of a coincidence.

UPDATE III: Rep. Louise Slaughter, the powerful Democratic Chair of the House Rules Committee, played a leading role in forcing the removal of Graham-Lieberman from the spending bill.  I spoke with her today regarding her opposition, and that discussion -- roughly 8 minutes in length -- can be heard by clicking PLAY on the recorder below.  Rep. Slaughter's resolve to continue to block this bill is particularly important in light of the increasingly obnoxious obstructionism from Joe Lieberman and Lindsey Graham, who today succeeded in attaching their pernicious amendment to a different bill -- one that regulates various FDA matters and that is now on its way to the House:

UPDATE IV:  At least if Lindsey Graham is to be believed, the Obama administration is now engaged in full-throated fear-mongering in order to force passage of this photo suppression amendment.

How can it possibly be that, on the one hand, there's nothing new or revealing about these photos -- nothing we need to see; just move along -- yet, on the other hand, release of these photos is going to single-handedly prompt mass bloodshed and conflagration in the Middle East?  Don't those two claims rather obviously negate each other?

We've already given the Muslim world a fair amount to be angry about:  invading, occupying and bombing two countries for 6 years and counting; massive (and ongoing) civilian deaths; a torture regime; Abu Ghraib and Bagram; imprisonment with no charges.  Does anyone actually believe that it will be release of these new photos -- which we're told are nothing new and quite banal -- that's going to be some sort of triggering event that causes mass Muslim attacks on American troops?  Even if that were true, it wouldn't justify suppression -- for the reasons I've set forth here and which two federal courts have formally adopted-- but, given the painfully contradictory claims being made, who actually believes these fear-mongering scenarios?

Either way:  the solution to inflaming anti-American sentiment is to avoid doing bad things in the first place and then, if such things are done, imposing accountability when discovered -- not diluting the long-standing laws of open government in order to cover it all up.

UPDATE V:  Regarding the Obama administration's attempt to suppress both the CIA video-destroying documents and the torture photos, The Washington Post's Dan Froomkin writes:

The president who came into office promising to restore our international reputation and return responsibility to government now seems to be buying into the belief that covering up our sins is better than coming clean.