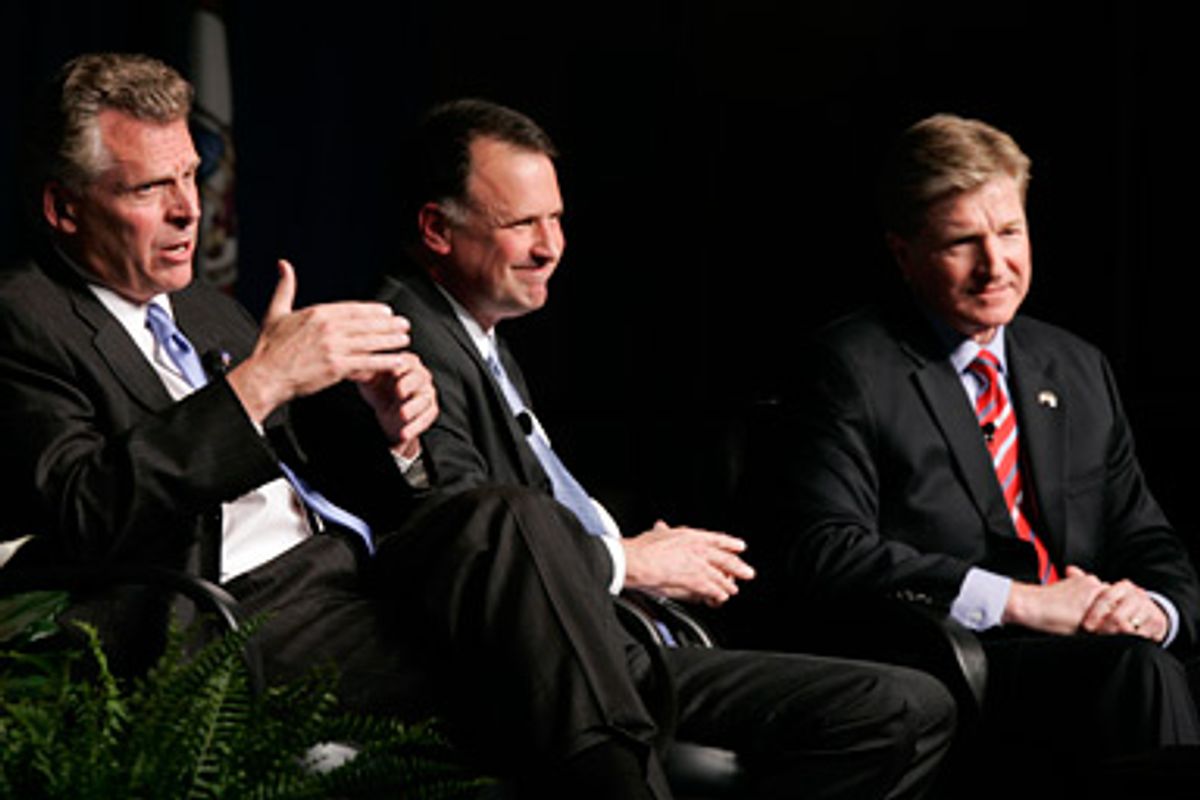 Maybe political junkies should all just be locked up in odd-numbered years. Or at least kept away from keyboards.

That would keep some of the frenzy that promises to grip Washington between now and November from infecting the rest of the country. Observers are already touting this fall's New Jersey and Virginia governors' races as early bellwethers for the 2010 elections and beyond, even though not all of the candidates will be chosen until Tuesday. "Off-season elections rarely predict the future – except when they do," the Washington Post declared Sunday. The same hype greeted the special election in New York's 20th Congressional District, which Democrat Scott Murphy won, albeit a month after the votes were actually cast. These off-year elections, the theory goes, will show whether Republicans are truly on the road to recovery, or whether voters have already soured on the Obama administration, less than six months in.

But Tuesday's three-way Virginia primary – between Creigh Deeds, Terry McAuliffe and Brian Moran – and the general election to follow may not wind up saying much about anything except the specific candidates and issues involved. The same probably goes for New Jersey, where incumbent Democrat Jon Corzine trails Republican challenger Chris Christie in early polling. "Governors' races are about local personalities or local fucking road issues," one Democratic operative grumbled, on condition of anonymity so as not to contradict, in advance, the spin the party is guaranteed to be putting out in November if Virginia and New Jersey go blue.

Local elections can provide small glimpses of what each party is doing right – or wrong – but looking for a deep national significance in the result is just the latest example of the Washington political establishment's thinking that everything that goes on around the country has to do with something happening inside the Beltway. By all means, tune in to the results Tuesday night, but if you do, here are five of the many things those results do not mean, whatever they turn out to be:

If Terry McAuliffe loses, Virginia has finally rejected Clintonism. Sorry, Virginia, but Virginia never had much use for Clintonism in the first place. (At least, white Virginia didn't.) Bill Clinton lost the state twice, and Obama blew Hillary Clinton out of the water in last year's presidential primary. Former Clinton-family acolyte McAuliffe is trying to reinvent himself as Barack Obama to appeal to the black voters and new voters that powered Obama's victory last fall. But McAuliffe is also happy to deploy Bill Clinton throughout the campaign, especially to try to appeal to the state's significant black population. Does that make his electoral fortunes a referendum on Clinton or Obama?

They are actually a referendum on Terry McAuliffe. His poll numbers are now collapsing under a heavy assault from rival Brian Moran; as Nate Silver pointed out on FiveThirtyEight, it's like a replay of Howard Dean's 2004 collapse in Iowa. State Sen. Creigh Deeds, the only one of the three candidates who isn't from the D.C. suburbs, seems to have seized the momentum. At this point it looks as though if McAuliffe loses, it'll be because voters snapped out of the name-I.D.-induced trance that powered his way into front-runner status in the spring, and thought a little more carefully about whether running the state should really be someone's first job in elected office in the midst of a recession bad enough that even McDonnell – the Republican candidate – is making jobs the main issue.

Republican victories show the GOP is poised for a comeback. Both parties are already spinning the results in both states, well before they're in. The GOP thinks that it can knock off Corzine and that McDonnell can win in Virginia, giving the party a shot of much-needed good press at a time when Obama still enjoys nearly 60 percent job approval ratings. No matter how things turn out in Virginia this week, the spin for November is already set. Win both states, the GOP message goes, and it'll prove the party's back in business with nothing wrong. "Republican victories in one or both states, on the other hand, would embolden more good GOP candidates to enter the lists for 2010, energize party activists and prompt donors to open their wallets (more widely)," Karl Rove wrote in a Washington Post Op-Ed piece on Sunday. Democrats agree with that, mostly because they don't think Republicans can pull off the exacta. So the more the GOP talks up victory as the first sign of a revival, the more Democrats await the chance to point to a failure as a sign of trouble. "We want to win them," one Democratic strategist said. "But they need to win them."

But allies of the White House also point to the serious advantages that the GOP has in each state. In Virginia, the Democratic primary has turned out to be fairly bloody, while McDonnell cruised to the Republican nomination unchallenged. The state also has a fairly frequent pattern of electing governors from the party that didn't just win the White House; from 1977 on, in the year after presidential elections the opposition has won Virginia. In New Jersey, the economy is a wreck, Corzine is unpopular, and his Goldman Sachs experience, once touted as a benefit, no longer looks so good. All of that is true, yes. But bringing it to the attention of reporters shows that Democrats are playing the expectations game as much as Republicans.

Democratic victories show the GOP is in hopeless shape.Just as a GOP sweep in the fall wouldn't mean that things were bright and sunny in Republicanland, so Democrats shouldn't take their own victories as proof that a new era of Democratic dominance had arrived. As strategists in both parties noted, governors' races in particular tend to hinge on local – not federal – issues. In New Jersey, part of the reason Corzine is in trouble is discontent over the state's high property tax rate, which doesn't have anything to do with Obama. In Virginia, the candidates are focusing on detailed, very state-specific economic proposals.

Still, even in Virginia, observers think there's some national implication to the results there. "Obama's going to be very visible here," said Bob Holsworth, a political scientist whose blog Virginia Tomorrow tracks campaigns and issues in the state. "The Democrats, in part, are going to try to make it a referendum on Obama, because I think they believe that's where they have a big advantage in this race." No matter who wins the Democratic nomination, having a popular president – who just won the state last year – campaign for him will be a much more attractive option than having Newt Gingrich or Sarah Palin come in for Bob McDonnell. If Obama does help in Virginia and New Jersey, expect Democrats to argue that it underscores his continued popularity heading into the 2010 elections.

Newspaper endorsements still matter. All the newspaper editors and media theorists fretting about the state of the journalism business will no doubt be excited to see a Deeds victory in Virginia's primary; he was in last place in most polls until the Washington Post endorsed him. But that doesn't necessarily mean that the paper moved voters. The endorsement came in the middle of the worst of the Moran-McAuliffe mudslinging, which often benefits whoever stayed out of the fray in a three-way race. "You have to be very careful about the kind of carom shots in these three-way primaries," Holsworth said. The endorsement probably did help Deeds get a second glance from Northern Virginia voters who read the Post and were ready to abandon their local candidates, Moran and McAuliffe. But even if Deeds wins, it won't mean a return of the days when newspaper moguls ruled local politics. "Newspaper endorsements don't matter unless you're in a three-way primary and the Washington Post endorses the one candidate who's not from Northern Virginia," Holsworth said. That's not enough power to revive the business.

Political operatives think these elections prove something about 2010 or 2012. One thing was clear from talking to strategists in both parties: The winner of a local election plays up the national implications of victory because the media loves to write about it. In private, Democrats concede that they are happy to see Republicans claiming the GOP comeback will begin this fall, but mostly because that provides a handy narrative if it doesn't. Republicans said more or less the same thing. "I expect that both parties have more than enough evidence to make the case that these state contests don’t have much bearing on national trends," said GOP strategist Kevin Madden. "But both parties also realize that the Washington media will take a magnifying glass to these contests and force a national assessment of the prospects of the Democrat and Republican parties as we head into 2010 mid-terms. Neither party likes it, and the party that wins may not entirely believe it, but both parties prepare for it."