The Fiat-ization of the American male

Can a nation of dudes whose sexual self-image was built on macho Jeeps survive the rise of the Little Mouse? 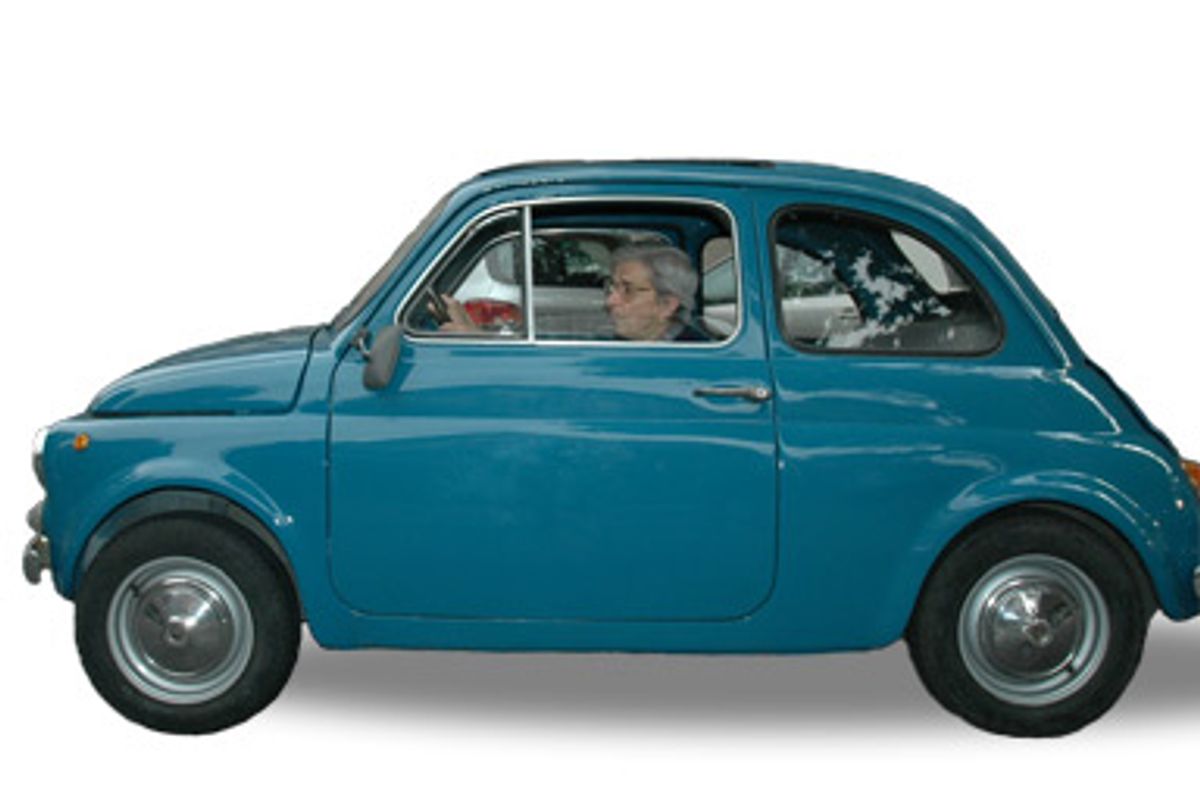 On Tuesday, the U.S. Supreme Court in its wisdom poured a large bucket of iced Pellegrino on that most delicate of objects, the American male libido. I refer to the court's removal of the last legal obstacle to an impending deal in which the Italian automaker Fiat will take control of Chrysler, the once mighty Detroit company that currently reposes on blocks, its precious fluids drained and tires removed, in that ever expanding vacant lot known as bankruptcy.

Whether or not this deal makes business sense for Chrysler's employees and shareholders — who now include the American people — is not within my area of expertise. But a much more serious problem looms: the potentially deflating effects on 100 million American men of outsourcing their sexual self-image to a company whose most famous product was known as the "little mouse."

Ever since the first American car clanked off an assembly line, American males have been programmed to associate virility with large, overpowered steel-and-chrome automobiles, preferably adorned with tumescent hood ornaments and protruding, D-cup-size bumper boobs. Buffeted by divorce, feminism, potbellies, a useless repertoire of lame pickup lines and the thousand other natural shocks that flesh is heir to, the long-suffering American male has always known he could find solace in the long, rigid-chassis object reposing in his garage. Indeed, only their function as a kind of auxiliary national phallus can explain why Detroit's gas-guzzling dinosaurs have survived as long as they have.

But with one rash, emasculating decision, the Supreme Court has drained the oil out of our national crankcase. The merger of Fiat and Chrysler means that the all-American era of he-man Jeeps, phallocentric Chargers and randy Rams has yielded to humiliating automotive domination by a country whose most famous building cannot even attain full verticality.

As George Herbert Walker Bush and John Wayne Bobbitt said, "This will not stand."

From their effete command post in a metrosexual-dominated cafe on the Piazza Navona, snivelling Euro-socialists will whine that the Fiat deal is no biggie because American consumers have long since made their peace with cars made in Germany and Japan. If American men can accept driving around in cars made by two of our arch-enemies in World War II, why shouldn't they feel the same way about ones made by the third member of the original Axis of Evil?

The answer, of course, is that Germany and Japan represented Evil with a capital E. From overrunning France in a month to conquering practically the entire Far East, they brought dynamism, efficiency and a can-do attitude to world conquest — and they brought that same attitude to making cars. The Italians, by contrast, could barely defeat Ethiopia. This is not a track record that inspires confidence.

Nor is Fiat's recent history any more encouraging. Fiat's one entry into the U.S. market was a debacle, memorialized mainly by the unkind crack that the company's name stood for "Fix it again, Tony."

Fiat reportedly now makes good small high-mileage cars, but its legacy of underpowered wimpiness is simply too much to overcome. American men are used to conquering the open road, stepping on the gas and feeling the surge of V-8 power as they careen across the country. It seems unlikely that they can adapt to a company whose 1963 auto instruction manual read, "Bear in mind that a few minutes' advantage gained by covering a certain distance at excessive speed may mean considerable extra expense in terms of fuel, tyres and maintenance. It is like throwing money out of the window, while common sense can save money." That is not a passage that would have inspired Jack Kerouac.

The consequences of Fiat's victory for the male American psyche could be devastating. Even though Chrysler will probably continue to make big cars for macho American dudes, the magical Euro-weeniness of the name "Fiat" alone will cause them to figuratively shrink. No nation can go directly from driving a Ram to driving a Little Mouse. Confused and belittled, American men will shrivel behind the wheels of their dinky cars. Millions of dates will end with a dry, perfunctory peck on the cheek, punctuated by the disillusioned slamming of a tinny, Platonic door. Misery will blight America's bedrooms. The sale of "If this van's rockin', don't come a knockin'" bumper stickers will plummet. Long-neglected American women will fall like ripe fruit into the hands of lecherous central-planning bureaucrats from Brussels.

It is a bleak scenario. But there is a ray of hope. It may yet be possible to turn the great pucker-inducing lemon that is Fiat into the juicy national equivalent of Led Zeppelin's "Lemon Song."

It's all about perspective. For Fiat's puny 500, the famous Cinquecento, a car so tiny and light that three men could pick it up and move it, may be an anti-aphrodisiac for American men, but for an entire generation of Italians, it was literally sex on wheels. In Italy's postwar era, as the nation pulled itself out of poverty, destruction, hunger and despair, the ubiquitous 500 represented not just freedom, mobility and the promise of a better life, but an opportunity for young Italians to get out of mama's house, park somewhere dark, put newspapers over the windows, crawl into its cramped interior, and begin the backbreaking process of increasing Italy's population.

At this dark moment in American history, with millions of people out of work, Fiat's lubricious legacy could resonate with American men and women alike. Moreover, while Americans may have their doubts about the sexiness of Italian cars (leaving aside the Alfa and the Ferrari), they have no such misgivings about the sexiness of Italians themselves. Properly marketed, Fiat could appeal to the latent desires of American men to be Marcello Mastroianni and American women to be Monica Vitti. I can see a glossy full-pager of two shapely Italian legs sticking out a newspaper-covered Fiat 500 window at an improbable angle, with the slogan below: "Fiat: Fun Inside All the Time!"

OK, this would mean handing over a big piece of our national sexual imagery to a bunch of foreigners. But if it saves American jobs and pumps up American libidos, what patriot would shrink from the sacrifice? Let the mouse from Milan roar!