The GOP and the medical establishment begin to push back on the public option, so Obama returns to the stump. 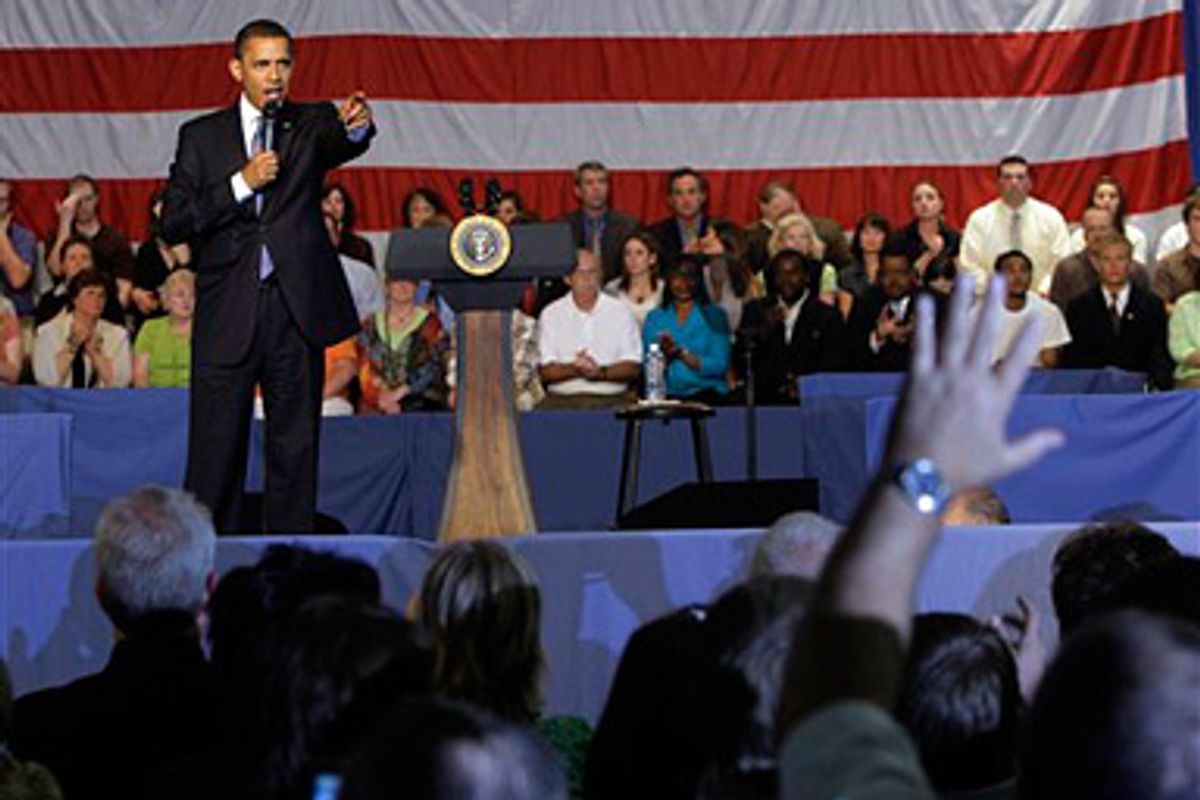 Barack Obama and his aides learned a simple lesson last year, in the seemingly endless 2008 presidential race: The guy is a very good campaigner. So it wasn't much of a surprise that they sent him away from Washington on Thursday, out to the heartland of Wisconsin, to keep building support for reforming the healthcare system -- and to tamp down the emerging resistance from the healthcare industry and the right.

Obama's town hall looked like a political rally all the way, right down to the huge American flag draped behind him; just like last year, Obama interrupted himself to acknowledge people in the audience who waved at him, and just like last year, he charmed the crowd. "Do you need me to write a note?" he asked a man who told him he had brought his daughter, skipping her last day of school to attend the event. The president wrote it out while the man spoke, walking down from the stage to deliver it.

The president used the same campaign-style shtick to push his economic stimulus plan into law earlier this year. But as Congress gets ready to write sweeping healthcare legislation, it's not clear whether this sales pitch will have the same outcome as the presidential campaign. Obama may have gotten big healthcare industry players to agree to talk about reforms, but now that things are actually moving, they're not playing along as nicely as the White House hoped they would. "Remember how [healthcare interest groups] all wanted a seat at the table?" one consultant working on the issue said. "Well, now they're all throwing their food."

The American Medical Association, representing doctors, is grumbling about allowing a government-managed health insurance option to become part of the eventual legislative package. Republicans are latching on to the public insurance option as their one chance to defeat Obama on healthcare. And even Democrats can't manage to agree on how to move forward with some key aspects of the healthcare plan -- liberals in the House want to talk about a single-payer system, with the federal government insuring everyone, but the administration says that's a non-starter.

Obama didn't get into the details much Thursday, preferring again to discuss his broad principles and the need for reform. That probably makes sense, because that lets him frame the issue as a choice between the current system -- which no one likes -- and his solution. "Our goal is simple: the highest-quality healthcare at the lowest-possible cost," he said. "Let me repeat what I said before: We want to fix what's broken, build on what works."

Though covering the 46 million Americans who don't have health insurance is part of his proposal, the White House's main goal is to rein in the runaway costs. Otherwise, paying for healthcare could devour the entire budgets of both government and private businesses in the near future. Premium costs have risen much faster than salaries in recent years; the U.S. spends more money on healthcare than any nation in the world, without much evidence that the quality of the care is any better.

Obama came to Green Bay because Wisconsin, and the Green Bay area in particular, spend less money on healthcare than most other parts of the country, without compromising the quality of the service patients get. "There are places where doctors typically work together as teams," he told his audience. "And they start off asking themselves, 'How can we provide the best possible care for this patient?' And because they're coordinating, they don't order a bunch of duplicative tests. And the primary-care physician who initially sees the patient is in contact with all the specialists so that in one meeting they can consult with each other and make a series of decisions ... that improve quality, increase coordination, but actually lower costs."

Another part of that plan is the administration's effort to get Americans to stop eating so much crap, start exercising more and cut off health problems early, before they turn into expensive chronic conditions. "We can all take steps to become healthier," Obama said. "And there is nothing wrong with us giving a little bit of a nudge in moving people in the direction of healthier lifestyles." Republicans, though, are already starting to ridicule that whole approach; Michelle Malkin called Obama "the Royal Captain of Calorie Consumption" the other day.

Snark from conservative bloggers alone won't block health reform, of course. But with Obama -- and his top budget aide, Peter Orszag -- framing the debate as a matter of efficiency and cost containment, the GOP is starting to realize that the White House is horning in on its opponents' usual rhetorical turf. So the defense Republicans are setting up involves latching onto the same theme they've been sounding about the government's aid to car companies and Wall Street. "It's really kind of an inescapable conclusion in most experts' minds that the true goal of a public plan option is to become a government-run system," Rep. Paul Ryan, a Wisconsin Republican, told reporters on a conference call organized by the Republican National Committee after Obama had left Green Bay.

Yes, that's right: Fixing healthcare will lead to communism. Or at least French-ism. "If Democrats enact a public-option health-insurance program, America is on the way to becoming a European-style welfare state," Karl Rove wrote in Thursday's Wall Street Journal. Liberal advocates of a single-payer solution might find it infuriating to hear the GOP call even a small public option some sort of government takeover of the healthcare system. But that looks like the way the debate is heading.

What Obama knows, and reminded his audience, is that even opposition that sounds silly at first can build momentum in politics. "This next eight weeks is going to be critical," he said. "And you need to be really paying attention and putting pressure on your members of Congress to say, there's no excuses. If we don't get it done this year, we're probably not going to get it done." As with nearly all of his policies, the White House realizes the president is his own best salesman here. If he can't push healthcare reform through now, he's probably right -- we're probably not going to get it done.