The woman Ahmadinejad should fear

Zahra Rahnavard could turn the tide in Friday's elections in Iran. 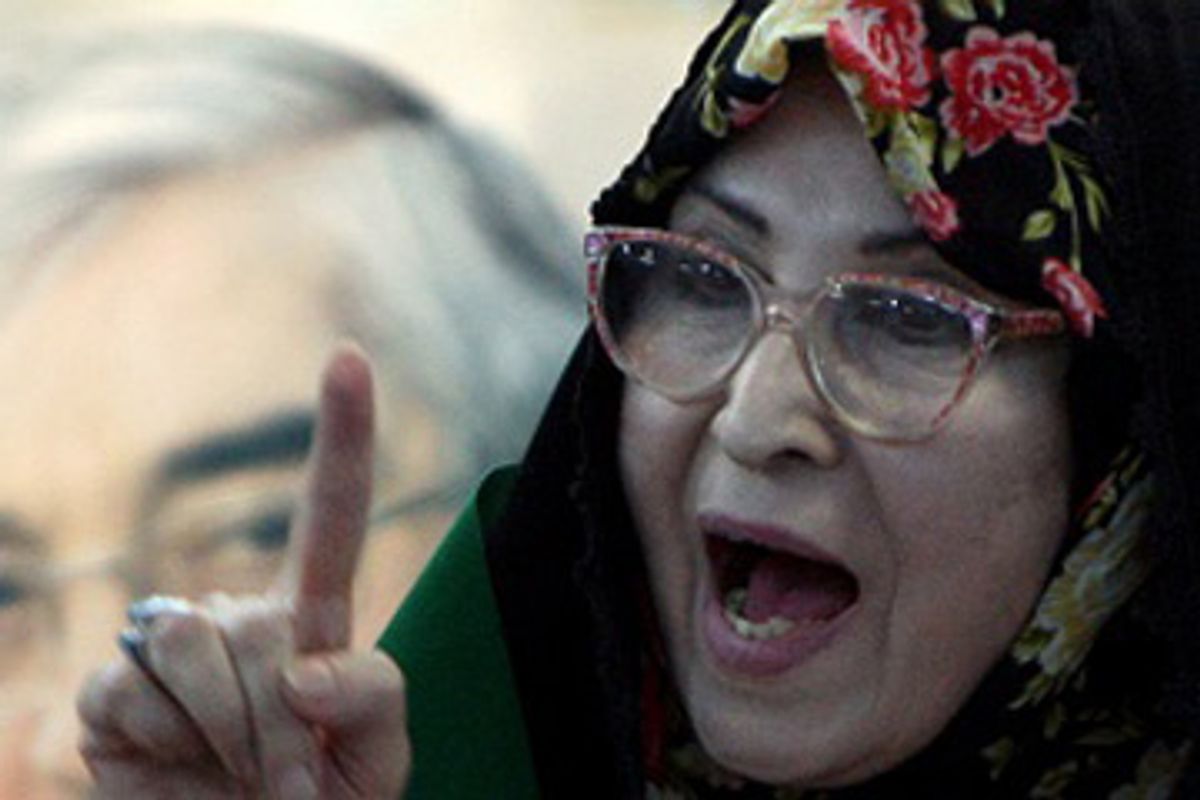 Even before Zahra Rahnavard had arrived, it was clear that this woman was an important figure in the Iranian election campaign. The team working for the election of presidential candidate Mir Hossein Mousavi had only expected a few journalists to turn up to his wife's press conference. In the end 150 gathered to hear her speak.

Since the revolution in 1979 no other political spouse has been so much in the public eye. Rahnavard is even featured in her husband's election posters: she stands next to him, holding his hand. In Iran's strict Muslim society this alone is nothing short of spectacular. She wears her black chador loosely and instead of a plain scarf, hers is printed with a colorful floral pattern. Thousands of copies of the poster can be seen across Tehran in the run up to Friday's presidential election.

Mousavi's strategy of bringing his wife into the campaign could ultimately tip the vote in his favor. People see the image of Rahnaward standing next to her husband as an equal as a kind of election promise. Many, and not just Iran's women, hope that if this reformist candidate wins, it could mark a new era of personal freedoms.

Absent independent opinion polls, it is impossible to forecast how the vote might turn out. It does, however, appear that Mousavi is President Mahmoud Ahmadinejad's most serious challenger. And the deployment of his wife on the campaign trail could play a major role.

For weeks Rahnavard has been travelling around Iran -- with and without her husband -- trying to drum up support for the conservative reformer. She talks about providing women with more rights before family courts, better education opportunities and more jobs. That is not only appealing to the female half of the estimated 46 million eligible voters -- many of their fathers, brothers and husbands also think this the right way forward.

Rahnavard has turned into Mousavi's secret weapon -- a fact made abundantly clear last week when Ahmadinejad himself attacked her. The 64-year-old wife of his rival might well be the former chancellor of the Al-Zahra women's university in Tehran, Ahmadinejad said, but her academic title is not genuine. Petty to be sure. But it shows that the president sees her as a genuine threat.

When Rahnavard arrived before Sunday's press conference, she was wearing a colorful headscarf and heavy make-up, a violation of rules in Iran. A denim shirt could be seen at the sleeves of her chador.

She had called the press conference to defend herself against Ahamdinejad's reproaches. But the Iranian and international press were interested in other issues. She was asked if she saw herself as an Iranian version of Michelle Obama. "I am not Iran's Michelle Obama...I am a follower of Zahra (the daughter of the Prophet Muhammad)," she replied self-confidently in English. But, she added, "I respect all women who are active." She said she would not stop working at the university if her husband was elected and that she would perhaps accompany him on trips abroad, to the applause of the Iranian journalists. Even the local press seemed pleased to hear her message of soft emancipation.

One journalist wanted to know if she would work to lift the headscarf requirement were she to become First Lady. The Koran rules that women and men should cover themselves, she replied. "However, one does not have to impose the headscarf rule as brutally as now," she added. The message from Rahnavard was clear: Reform, yes. But only within the strictly defined limits of the Islamic Republic of Iran.

Anything else would be unlikely. Even if it is primarily Iran's liberal women who are hoping for her intercession, she is far from being oriented toward the West. Of the 30 texts that she has published, one is an ode to the headscarf with the sub heading: "The message of the Muslim woman." Even her name is points to her beliefs. The professor who studied both art and political science was born as Zohre Kasemi. Then in the 1960s she changed her name. Zahra is the name of the Prophet Muhammad's daughter while Rahnavard means "she who is on the (Islamic) path."

The reason why so many women support her nonetheless is evident becomes evident on a visit to a beauty salon in the rich northern part of Tehran. These salons have become oases for Iran's women. Headscarves and long coats can be removed, and many restraints are also thrown off as women speak to each other about politics. "Iranian women are self confident, sexy and intelligent," says Mahin as she massages a client's face. The rest of the world doesn't perceive this, she says. Instead it thinks of the image of the oppressed woman in a chador.

"Of course we would prefer it if Iran was represented by a modern woman like Michelle Obama," says Mahin. "But she's not standing for election." The important thing is that women get a voice. Rahnavard has promised that her husband would definitely appoint two or three women to the cabinet. "That would be a start," the masseuse says.

Elham, waiting to get her eyebrows plucked, says she wants women to have better job opportunities. "I've been lucky but many of my female friends didn't find a job after university," says the 23-year-old woman who sells medical equipment. More than 60 percent of Iran's university students are women but with unemployment in Iran running at 20 percent, employers can afford to be selective. Many prefer men, and women make up only 15 percent of the workforce.

"Maybe Mousavi and his wife can change that," says Eham. Hopes are being fanned by Rahnavard's statements such as one that man and woman are like the two wings of a bird. A bird can't fly if one of the wings are broken, she likes to say.

"Freedom is good for business"

For the women in the salon, the biggest source of irritation in their everyday lives is the moral police who control whether men and women stick to the rules. Women have to watch carefully what they wear: a headdscarf and loose-fitting garments that reach at least half-way down their upper thighs are mandatory. Farzan, who specializes in oriental depilation with hot wax, has been arrested twice: the long coat over her trousers was too tight.

"Spending two nights in a hall with 50 or 60 girls, that's enough," she says and presents her new coat which reaches well below her knees. "I had to sign twice that I will dress decently in future. If they catch me again I'll have to pay a $200 fine. After that I may even be whipped, I don't want to risk that." It's possible to buy oneself out of physical punishment, but it's difficult, says Farzan

In Iran, high politics shaped exclusively by men regulates every detail of everyday life. The long arm of the state reaches into the beauty salons, as the women here have witnessed. When Ahmadinejad was elected president four years ago, the controls by the moral police got noticeably tighter. Vibrantly colored fingernails, French manicures, false acrylic nails -- there was a catalogue of fines for the various looks. "Our business went down sharply at that time," the salon's manicure specialist recalls. She wants to vote for Mousavi -- "the one with the woman" -- simply to safeguard her job. "Perhaps he'll bring a bit of freedom. Freedom is good for business."