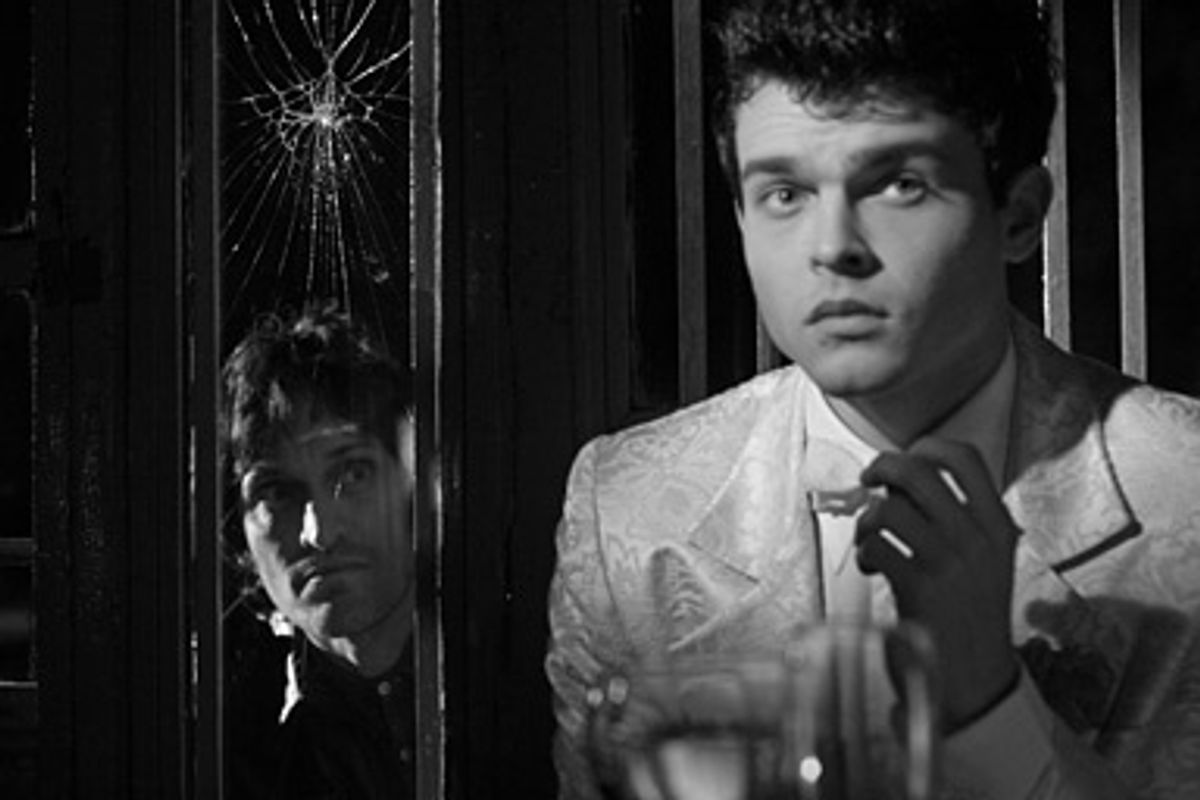 Context is everything: If you saw "Tetro" and were told it was the work of an ambitious, 30-ish writer-director, working with top-notch technical resources and a midsize budget for the first time, it would appear as a lovely, flawed, adventurous movie, ample evidence of its creator's abundant talent and perhaps also his need to grow up a little. It's a luminous, wide-screen, black-and-white melodrama about brothers and fathers and love and art and family secrets, built around wonderfully charismatic performances by Vincent Gallo and teenage newcomer Alden Ehrenreich. It's loaded (quite possibly overloaded) with symmetrical coincidences, film-school references, self-aware theatricality and Kerouac-flavored testosterone. It was shot in Buenos Aires and is set in a quasi-contemporary nevertime that isn't specific enough to be the '60s, the '80s or right now.

To my way of thinking, all those things I said about "Tetro" remain true even when you know that the ambitious young man who made it, the one with tremendous talent and not quite enough maturity, is 70 years old and once — in an unimaginably different era — directed the most famous and most widely acclaimed American film since "Citizen Kane." Like a character in some unpublished Poe short story, or like the Tim Roth character in Coppola's 2007 comeback vehicle "Youth Without Youth," Francis Ford Coppola has outlived himself and become young again. Let the blogulous chorus of professional nibblers and deriders make sport of Coppola for taking huge chances, for trying and failing, for daring to be vulnerable. After everything he's been through, I'm guessing he can take it.

Coppola himself is a character worthy of Orson Welles or Scott Fitzgerald; he has known the heights of mainstream success and the depths of humiliating failure. Barely a decade after making "The Godfather" and "The Godfather Part II," Coppola had blown most of his fortune, bankrupted his production company, and become a Hollywood director for hire and a Napa Valley vintner. For most of the past 20 years, he has appeared culturally and artistically irrelevant, a semiretired big name wheeled out periodically for such prestige vehicles as the Keanu Reeves "Dracula" of 1992 or the John Grisham adaptation "The Rainmaker" in 1997. He ran the considerable risk of being known to younger movie buffs primarily as the dad of a hotshot young filmmaker, albeit one who had reportedly once worked in the field himself.

Unlike his old friend and 1970s collaborator George Lucas, Coppola always saw himself as a writer-director whose heart lay in visionary, personal and eccentric films rather than mainstream entertainments. In fact, you can see that career as a subset of his larger career: Precursors to "Tetro" include "Dementia 13," "The Conversation," "Apocalypse Now," "One From the Heart," "The Outsiders," "Rumble Fish" and "Youth Without Youth."

I'm not suggesting for a second that Coppola could, should or would disavow the "Godfather" series; it is the reason his name will be known as long as anyone on our dying planet still bothers to watch movies. But the fact that Coppola was hired, as a little-known 32-year-old, to direct the screen version of Mario Puzo's potboiler crime novel — and then given a relatively free hand to make it the way he wanted — was itself a kind of historical accident, a product of the revolutionary climate of early-'70s Hollywood. It sent him on a long and unexpected career trajectory, and you have to wonder whether he sees all the millions he has made and lost since then, all the flops and mediocrities he has made, and all the small-minded pontificating to which he has been subjected, as a karmic evening of the score.

That brings us back to "Tetro," and if you suspect I might be grading this movie on a curve because it's such an imperfect and brave young man's movie made by Francis Coppola, I will happily plead guilty. Certainly it isn't the greatest of Coppola's pictures, or even of his independent productions, but those are pretty high standards. It has a verve and vitality that's been missing from his pictures for 25 years, and its various and visible flaws all result from too much of that verve rather than too little. I enjoyed it tremendously, and when it went gleefully over the top into something like meta-melodrama in its final half hour, I enjoyed it even more. Coppola dares us to laugh at the increasingly outrageous Freudian showdown between long-estranged brothers Bennie (Ehrenreich) and Angelo, aka Tetro (Gallo) — and also dares us to resist its powerful emotional undertow.

Coming out of the New York critics' screening of "Tetro," I heard some guy complaining to another that the film's plot resolution was preposterous. I'm glad to say I stopped myself from pushing the elevator's emergency-stop button and engaging him in mock-Socratic dialogue: So you found the rest of the movie entirely plausible, did you? Including all the quotations from the sadomasochistic psychological-fantasy films of Michael Powell and Emeric Pressburger? The choreographed Latin ballet interludes? The transgender adaptation of "Faust"? The funeral sequence that looked like one of Mussolini's nightmares? Furthermore, realism is obviously the most important goal of cinema, right? And this oh-so-realistic-but-for-the-ending movie is set in what year, would you say?

Ehrenreich is a screen natural in the young Leo DiCaprio tradition, and he plays Bennie as a wounded American innocent, a Holden Caulfield type who seems to have run away from home and worked his way to Argentina as a cruise-ship busboy entirely to track down his older brother. Aspiring novelist Angelo ran away from their domineering dad (Klaus Maria Brandauer), a legendary symphony conductor, many years earlier. Angelo promised to come back for Bennie but never did, and now, rechristened as Tetro, he's a literary washout crippled by a mysterious leg injury (I said it was Freudian), who runs lights for avant-garde theater productions in Buenos Aires' ultra-trendy La Boca neighborhood.

Whatever you make of him as a personality, Gallo brings Tetro to life as a tender, angry and majorly messed-up mixture, somewhere between roguish James Dean adventurer and potential ax murderer. He's not all that happy to see Bennie, purportedly because he's cut himself off from their New York childhood, the tragic car-wreck death of his own mother, and the mysterious near-death of Bennie's (they're half-brothers, almost 20 years apart in age). In fact, Bennie's arrival offers Tetro a last chance to free himself from endlessly replaying — and repeating — the cycle of disasters, to face long-buried family secrets and to reclaim his heritage and his potential.

Parallels between Tetro's predicament and those of his creator — this is Coppola's first original screenplay since "The Conversation" in 1974 — are almost too obvious to be dissected at length. But as I longed to inform my elevator companion, judging "Tetro" by the standards of normal realist-humanist cinema is a categorical error of howler proportions. Coppola and cinematographer Mihai Malamaire Jr. have created a shimmering imaginary landscape in high-contrast black-and-white, drawn (they say) from such classics as "On the Waterfront" and Antonioni's "La Notte." (Honestly, you might not be able to define Coppola's entire career any better than by citing those two films as inspirations.) What you see here isn't the "real" La Boca, one of the Argentine capital's most colorful districts, but a nightworld of dreams and symbols.

Throw in the color flashback scenes, many of them inspired by Powell and Pressburger's bizarre "Tales of Hoffmann," the Latin-symphonic score by Osvaldo Golijov, and the tango-modern dance numbers choreographed by Ana María Stekelman, and you've got a movie that, whether you like it or not, resembles nothing else and doesn't try to. Actually, no, I take that back. In genre, ambition and tone (but not at all in style) "Tetro" is a cousin to "One From the Heart," the doomed, gorgeous Vegas fantasy that torpedoed Coppola's career the first time around. To paraphrase another great American artist with an up-and-down career, he was so much older then. He's younger than that now.

"Tetro" is now playing in New York and Los Angeles. It opens June 19 in Boston, Chicago, San Francisco, Seattle and Washington, with more cities to follow.