John Travolta and Denzel Washington face off in this New York subway thriller. But will they hijack a classic? 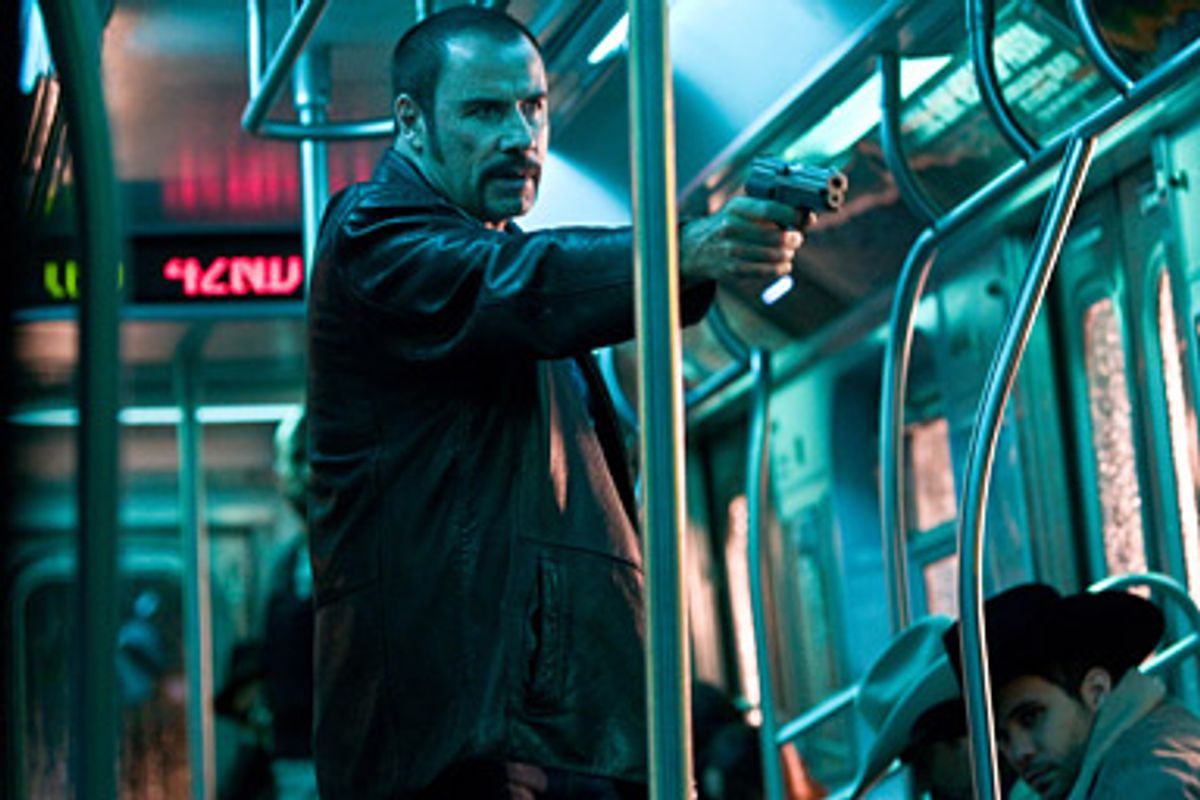 So there's this movie, see, called "The Taking of Pelham 1 2 3," and, yeah, it's a more-or-less remake of that 1974 subway-hijacking hit with an awesome A-minus cast (Walter Matthau and Jerry Stiller as New York cops! Robert Shaw, Martin Balsam and Hector Elizondo as thugs!). This time around the cast has been upgraded, at least theoretically, and it only seems like there have already been a dozen movies where Denzel Washington plays the morally compromised but fundamentally decent authority figure and John Travolta has odd facial hair and plays a creep. There actually haven't.

On the other hand, the producers have handed the directorial reins to Tony Scott, and that isn't an upgrade over anybody, because Tony is known around the world as the shallower, more superficial and more style-obsessed of the filmmaking Scott brothers, which is really, really saying something. I was seriously trying to figure out if I had a "favorite" Tony Scott movie, and I kind of got stuck on that problem. I think it's going to have to be a tie between "The Hunger" (hottest David Bowie lesbian-vampire flick of the entire MTV era) and the music video he made for George Michael's "One More Try."

But enough about that. Let's talk about what's really interesting in "The Taking of Pelham 1 2 3," which is the question of Wi-Fi and cellphone reception in the New York subway. Because if you could actually get the kind of signal down there that people get in this movie, life in Gotham would be more awesome and terrible than it is already. My fellow glassy-eyed robots and I would just ride around all day and night in an electronic stupor, from Van Cortlandt Park to Coney Island and back again, forgetting where we had gotten on and were supposed to get off, downloading pointless apps and videotexting each other and watching PowerPoint presentations and 18-hour-old snippets of Stephen Colbert monologues under that horrible blue-white lighting.

Scott and screenwriter Brian Helgeland have incorporated various "new technology" gizmos (like, um, computers connected to the Internet) into their hijacking plot, which is the sort of thing Hollywood people do to make themselves seem all on top of things, but only makes them look like dumbasses and ensures that their movie will look ludicrous in three years. (This movie manages that pretty well right now.) Early in "Pelham 1 2 3," when you see some faintly Goth-skater-looking dude on the 6 train Skyping with his needy girlfriend, who wants to show him her dusty-rose push-up bra, actual New Yorkers will be all, like, OK, she may be cute but grrr. Because there's no damn signal in the damn tunnel.

Shortly thereafter, Travolta's shadowy bad guy and his minions -- including Luis Guzman as a defrocked subway motorman and a couple of never-identified Eastern European hoodlums -- take over that particular car on the 6 train in a burst of grueling violence, decouple it and hold the passengers for ransom. So the skateboard kid's computer gets knocked to the floor with the Skype connection still open, and Ms. Lavender Wonderbra can watch the whole thing and stream it live on her blog and news sites pick it up and undoubtedly that's going to become a crucial plot point -- but it totally doesn't. It's just meaningless, vaguely contemporary background clutter for a marginally competent tick-tock thriller that looks good (and by "good" I mean like expensive and trashy TV), mashes up a stew of familiar ingredients and leans way too heavily on that '70s-era stereotype of New York as an ungovernable moral wasteland.

Once Travolta's tattooed psychopath has stranded the train car, mid-tunnel, and announced that the city's got an hour to bring him $10 million in cash, he's locked into one of those hostage-drama relationships with Garber (Washington), a family-man subway dispatcher with a pullover and spectacles who's under investigation for bribery. The other players are John Turturro as a phlegmatic NYPD hostage negotiator and James Gandolfini as the quasi-corrupt mayor hoping not to get swamped by the crisis, and you've got to admit that's a fine assortment of American acting talent. Amid his trademarked quick cuts, smears of color, helicopter shots and montages set to pop music, Scott clears out moments for orchestrated close-ups and two-shots so his stars can do their thing.

But that's just it: Helgeland's story (taken from the original crime novel by John Godey, not from the '74 screenplay) is so formulaic and the characters so stock that we're just sitting there waiting for these guys to perform like circus animals. Washington will be grave and earnest, Travolta will be a wisecracking loony, Turturro will be deadpan and Gandolfini will be a bear with a murderous stomach ulcer. You could assign the four roles at random to those actors -- they've all played them elsewhere -- and the movie would be about the same. (Actually, I'd like to see Washington as the bad guy. He hasn't done that enough, and Travolta's done it way too much.)

Scott has been choreographing expensive Hollywood violence for more than a quarter-century, and the shimmering claustrophobia of that fluorescent-lit subway car, along with the amphetamine-paced editing, are enough to keep you hooked for the first 40 minutes or so. Around the time the plot starts to revolve around outrageous coincidences and conversations about a "Lithuanian ass model," and Travolta's evil mastermind sinks into contemplation of his own genius on MSNBC or whatever -- that's right; the villain of this movie spends a lot of time, mid-hijack, on the Internet -- something about his character's close-cropped haircut and neat little 'burns 'n' goatee package started to bother me.

Why did I think that Travolta's character looked totally gay? Was it the jokes about prison sex? Were his hair and clothes triggering an unconscious homophobic reaction? And then it hit me. The 'stache, the chest, the hair, the cocky, rooster swagger -- Travolta, at least in this role (and maybe more generally) has turned into Freddie Mercury! And that made me all wistful, because if Freddie were still with us, and starring in some cracked Tony Scott movie where he gets awesome wireless reception in a subway tunnel and shoots a bunch of people in between verses of "Bohemian Rhapsody," we would have a somewhat more interesting world than the one that produced this piece of disposable crap.