The polite vampires of HBO's "True Blood" rise from the dead for a second season of blood lust and moral ambiguity. 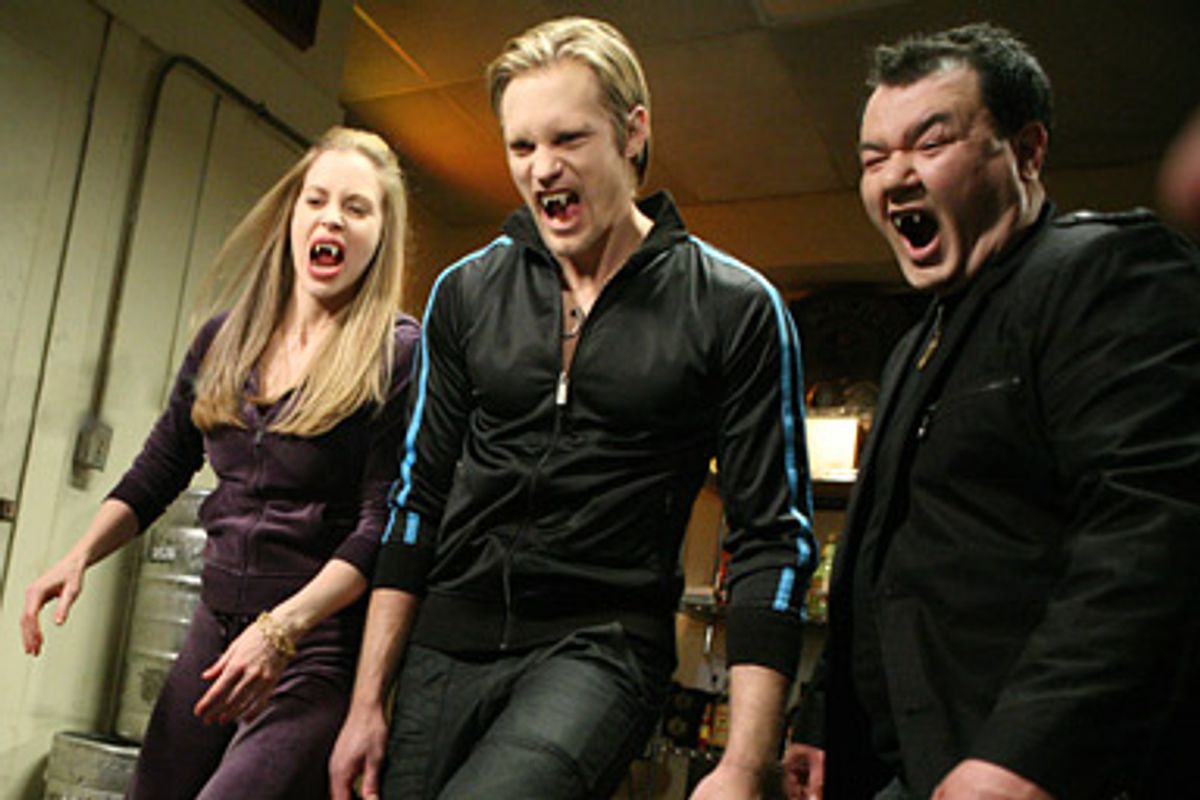 "Not to be disrespectful, but if I don't get this money, someone is going to die." That's what a man making threats against the president told a bank teller a few weeks ago -- which is sort of like saying, "Not to be rude, but I may have to bash in your kneecaps with this baseball bat," or "I don't mean to interrupt, but this room is rigged with plastic explosives."

While most of our day-to-day interactions with strangers are openly barbarous -- shouting on the freeway, eye-rolling in the grocery line -- we wish them the best underneath it all, don't we? On the other hand, it's always the most polite and respectful types who turn out to be experimenting with homemade hand grenades in their basements or stockpiling firearms in their sheds.

This paradox of polite savagery lies at the heart of Alan Ball's "True Blood," which returns for a second season (9 p.m., June 14, on HBO). The drama series repeatedly toys with notions of so-called civilized society, forcing us to question what makes a person (or vampire) morally upright or fundamentally depraved. While the vampires of "True Blood" share an unfortunate habit of sinking their fangs into innocent necks the second a mortal refuses to cooperate with their requests, they usually do ask first -- often quite nicely. Despite giving the outward appearance of unmannerly ways, the vampires seem to respect long-standing traditions and rules governing their behavior. When the first season drew to a close, Bill (Stephen Moyer) was pulled into a ghastly vampire tribunal that was nonetheless conducted in the most courteous manner by a ghoulish Magister (Zeljko Ivanek). Even Bill, who's slow to mind authority, acquiesced to the Magister's ruling, then apologized sweetly to Jessica (Deborah Ann Woll) for having to turn her into a vampire -- albeit one who's far less gracious and accommodating than he is.

As the second season of "True Blood" returns, our favorite vampires find themselves confronted by a force far more powerful and demonic than anything they've encountered before -- but that doesn't make them any less conciliatory and refined. When Sookie threatens to call the cops on Eric (Alexander Skarsgard), he bares his fangs at her, then says, softly, "I do not respond well to threats. But perhaps we can come to some sort of arrangement."

So once again, just as we're starting to warm up to our deathly pale but diplomatic vampire friends, we're treated to Ball's rather prosaic enjoyment of stock Southern Christian characters who would only seem fresh and original to a Frenchman. Why do the religious depictions in this show always feel like they're created for the benefit of New Yorkers and European tourists? Meanwhile, the rest of us actually grew up next door to God's faithful carnies, and would really rather avert our eyes from the 50 millionth depiction of Hell House ("United States of Tara"), abstinence-pledging teens ("Weeds," "The Goode Family") and homophobic closeted gay preachers (omnipresent).

Yes, we get it. The point is to grapple with who's good and who's evil and what kinds of choices fall somewhere in between: Eric helps Bill while quietly stalking Sookie; LaFayette plays whatever angle he can to get what he wants; Tara has strong convictions, but her lack of faith in herself leaves her vulnerable to getting used; Sookie is morally upright but filled with both empathy (her weakness?) and a taste for the dark side (her strength?).

And then there's Bill, a character who, despite being a vampire, seems designed to reflect the virtues and flaws of Western man. He embraces certain standards of politeness and diplomacy, but his civility often appears skin-deep, a desperate means of tamping down his savage, bloodthirsty nature. When he warns Sookie that his charge, Jessica, as a young, newly made vampire, will have serious problems with impulse control, he also underscores how long and hard he's struggled (like the Western world itself!) to get a handle on his own dark urges and slippery desires. Wait, now. Is Bill a vampire, a married man lingering outside a massage parlor, or a world leader with his finger hovering over an ominous red button?

But if Bill represents a judicious but secretly bloodthirsty superpower, then Maryann (Michelle Forbes) is a rogue state teeming with terrorists and corrupt generals -- maybe somewhere in the tropics (Indonesia?), given Maryann's penchant for fat joints and fruity drinks. For the barely restrained hedonists among us (I think that's all of us, actually), Forbes is a joy to watch. That woman was born to play the role of smug, sybaritic seductress, sighing happily over her lush spread of fruits and pastries and fresh coffee, then rolling up a gargantuan spliff to share with Tara. Whether she's charming the otherwise surly crowd at Merlotte's into dancing and carousing like a Dionysian trollop or wandering through her lavish grounds in a delighted haze of self-satisfaction, Maryann represents a complete surrender to carnal desire. Of course, without any boundaries or rules or structure to guide the proceedings, Maryann's pleasure dome is sure to devolve into chaos, and there's not much doubt that, given her glowering looks and habit of hanging out with enormous pigs, Maryann represents chaotic evil, and not chaotic good.

So let's pretend we're Dungeons and Dragons geeks for a minute and figure this out: If Maryann is chaotic evil, then Bill is lawful neutral (highly honorable but prone to good or evil behaviors depending on the circumstances), Eric could be characterized as lawful evil (morally corrupt but at least beholden to higher laws), the Christians might be thought of as lawful good (although their rules of kindness and charity are often twisted to enact vengeance against sinners, made reprehensible by their habit of having way more fun), Sookie is chaotic good (confidently breaks the rules based on her own pure-hearted but sometimes misguided instincts), LaFayette, like any scrappy, self-serving survivor, is chaotic neutral, and Jason can only be summed up as highly suggestible.

But the more we try to package and label these characters in order to understand them better, the more they slip out of our grasp. What do we really mean by "good," and what good is a good that's used to justify an evil? What honor is there in respecting laws that were created by inherently corrupt, self-serving individuals who, through cultural reproduction, aim (consciously or unconsciously) to maintain the supremacy of an elite few?

Of course, the show's opening credits, a montage of blood and snakes, preachers and pole dancers, rotting creatures and ruby red lips, make it clear that this state of moral confusion and ambiguity is the whole point. "I used to get so mad when people judged vampires just for being different," Sookie tells Bill on another one of their harrowing late-night drives through the swampy hinterlands. "It's like they were judging me, too. I told myself their fear was nothing but small-mindedness, but maybe that's just what I wanted to believe, because the more open my mind gets, the more evil I see."

Bill, looking paler than ever, responds with his usual slightly condescending but patient tone. "Sookie, most of us, vampire or human or otherwise, are capable of both good and evil, often simultaneously." So there you have it: good and evil, at the same time. Civilized and chaotic. Polite inquiries masking a barely containable, savage rage. "Not to be disrespectful, but if I don't get this money, someone is going to die." Hmm. Maybe "True Blood" is a little less cartoonish and over-the-top than it sometimes seems. Or maybe we're too overwhelmed or distracted or disenchanted to recognize the true nature of this cartoonish, over-the-top, morally mixed-up world we're living in.

Alan Ball Hbo I Like To Watch Television True Blood