The "Bomb Iran" contingent's newfound concern for The Iranian People

Many of those now expressing solidarity with "The Iranian People" have been recently advocating bombing them.

I'm going to leave the debate about whether Iran's election was "stolen" and the domestic implications within Iran to people who actually know what they're talking about (which is a very small subset of the class purporting to possess such knowledge).  But there is one point I want to make about the vocal and dramatic expressions of solidarity with Iranians issuing from some quarters in the U.S.

Much of the same faction now claiming such concern for the welfare of The Iranian People are the same people who have long been advocating a military attack on Iran and the dropping of large numbers of bombs on their country -- actions which would result in the slaughter of many of those very same Iranian People.  During the presidential campaign, John McCain infamously sang about Bomb, Bomb, Bomb-ing Iran.  The Wall St. Journal published a war screed from Commentary's Norman Podhoretz entitled "The Case for Bombing Iran," and following that, Podhoretz said in an interview that he "hopes and prays" that the U.S. "bombs the Iranians."  John Bolton and Joe Lieberman advocated the same bombing campaign, while Bill Kristol -- with typical prescience -- hopefully suggested that Bush might bomb Iran if Obama were elected.  Rudy Giuliani actually said he would be open to a first-strike nuclear attack on Iran in order to stop their nuclear program.

Imagine how many of the people protesting this week would be dead if any of these bombing advocates had their way -- just as those who paraded around (and still parade around) under the banner of Liberating the Iraqi People caused the deaths of hundreds of thousands of them, at least.  Hopefully, one of the principal benefits of the turmoil in Iran is that it humanizes whoever the latest Enemy is.  Advocating a so-called "attack on Iran" or "bombing Iran" in fact means slaughtering huge numbers of the very same people who are on the streets of Tehran inspiring so many -- obliterating their homes and workplaces, destroying their communities, shattering the infrastructure of their society and their lives.  The same is true every time we start mulling the prospect of attacking and bombing another country as though it's some abstract decision in a video game.

After The Wall St. Journal published the Podhoretz war dance demanding that Iran be bombed, and after Podhoretz casually called for England to "bomb the Iranians into smithereens" if their sailors weren't immediately returned, I wrote:

In this week's Newsweek, Michael Hirsh has a worthwhile article reporting on his observations during his visit to Iran. While listing the internally repressive measures taken by the Iranian government, Hirsh describes Tehran as "bustling," as "traffic crowds the streets and boulevards," filled with the "chic" Iranian women and the "meterosexual" Iranian males who seek greater economic security and prosperity. That is what Norm Podhoretz and his friends hungrily want to annihilate.

Matt Yglesias, in a recent post about the administration's "debate" over whether to bomb Iran, wisely included a random photograph of an Iranian street with civilians walking on it. These are the people Norm Podhoretz and his comrades want to slaughter: 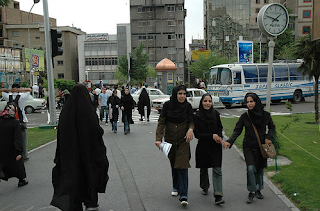 Our ability to render invisible the people we kill when cheering on our wars is one of the primary mechanisms which make it so easy to embrace that option.

Perhaps the scenes unfolding in Iran, our Enemy Du Jour, will make those dehumanization efforts -- the linchpin of our militarism and state of perpetual war -- more difficult in the future.

UPDATE II:  Even leaving aside Rudy Giuliani's contemplated first-strike nuclear attack and Norm Podhoretz's desire to "bomb the Iranians to smithereens" -- plans that would obviously kill an unspeakably large number of Iranians -- it's delusional to claim that these desired bombing attacks would be "targeted" and thus wouldn't result in substantial civilian deaths.

Even the limited version of the standard neocon bombing plan envisions at least 1,500 targets.  Many of their attack plans were far more elaborate than that.  Many bombing-Iran advocates -- such as Newt Gingrich and John Bolton -- have "regime change" as the ultimate goal.  When is the last time we dropped thousands -- or even hundreds -- of bombs on a country without killing large numbers of people?  Virutally no experts believe we could meaningfully impede Iran's nuclear capabilities without massive bombing campaigns, and even the CIA recognized as absurd the claim that you could drop bombs on Iran's nuclear facilities without causing widespread, uncontrollable devastation:

The U.S. capability to make a mess of Iran’s nuclear infrastructure is formidable,’ says veteran Mideast analyst Geoffrey Kemp. ‘The question is, what then?’ NEWSWEEK has learned that the CIA and DIA have war-gamed the likely consequences of a U.S. pre-emptive strike on Iran’s nuclear facilities. No one liked the outcome. As an Air Force source tells it, ‘The war games were unsuccessful at preventing the conflict from escalating."

The notion that we would have harmed Iran's nuclear capabilities with our bombing attacks without killing substantial numbers of Iranian civilians is a fantasy comparable to the claim that we could remove Saddam Hussein in a quick and easy war, with few civilian casualties, and in the face of a grateful population.  Except where there is a single target, that isn't what happens when you bomb countries.  Large numbers of civilians die, and the advocates of these campaigns -- today masquerading as crusaders for the welfare of the Iranian People -- were well aware of that result and (at best) were indifferent to it.