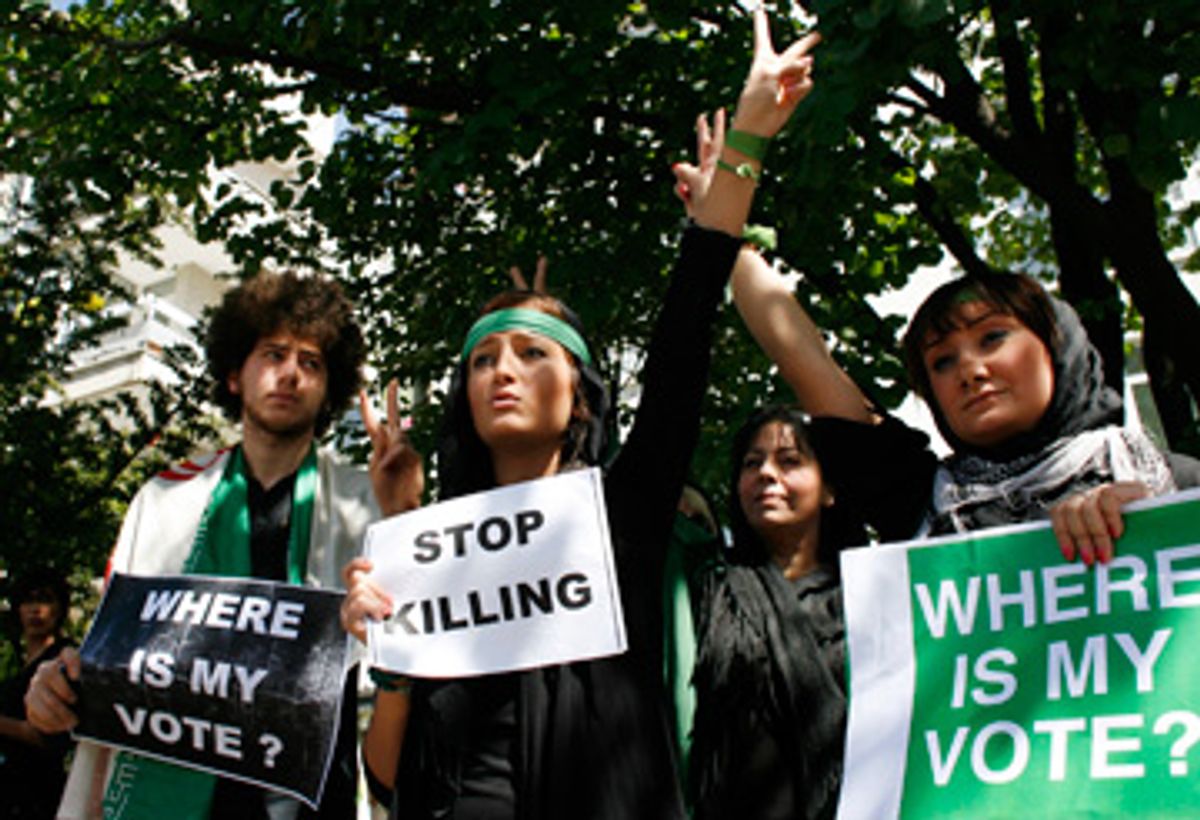 A YouTube member named iranlover100 has posted an extensive amount of video seemingly of the protests in Iran. Below is a graphic video in which a girl appears to have been shot.

The BBC also has footage of what appears to be plain-clothed pro-government militia members attacking an Iranian student university dormitory.

"Although there is amazing ferment taking place in Iran, the difference in actual policies between [Iranian President Mahmoud] Ahmadinejad and Mousavi in terms of their actual policies may not be as great as advertised...I think it's important to understand that either way, we are going to be dealing with a regime in Iran that is hostile to the U.S."

The New York Times reports that the Mousavi campaign posted a message on their Twitter feed asking protesters to shout “Allahu Akbar” from rooftops tonight. The Twitter feed also said that Mousavi is ready to appear on state TV and explain his position on the election.

Declaring results that no one in their right mind can believe, and despite all the evidence of crafted results, and to counter people protestations, in front of the eyes of the same nation who carried the weight of a revolution and eight years of war, in front of the eyes of local and foreign reporters, attacked the children of the people with astonishing violence. And now they are attempting a purge, arresting intellectuals, political opponents and Scientifics.

Mass opposition rally in Northern Tehran, a stronghold of the opposition. Mir Hossein Mousavi had told supporters not to assemble, but they merely changed the venue.

The 2 pm news shows nearly 10-15 minutes of damage from the "march without permit." Once again, the law and order theme is used against protesters. What's interesting is that while the outrage of Mousavi voters is acknowledged, as is the nightly violence, the message is that the behavior of the Mousavi voters is outside of the confines of what is appropriate and patriotic. The theme is clearly that Mousavi is rational and reasonable but that this movement is attracting "lot i loot" (hooligans). Parents are advised to keep their young kids from being "fooled" by trouble-makers -- "Don't let them go out." Dr. A [Adhmadinejad] is shown getting blessings from the Russian press. No doubt the decision of the Guardian Council to recount votes gives an excuse to allow peaceful marches to continue, there is a need to show that the system is working and it's legitimate.

A pro-Mousavi march that was scheduled for 5 pm in Vali Asr (spread by word of mouth yesterday) was cancelled as pro-government forces immediately (proving what I've said about the organizational capacity of the Ahmadinejad side), announced their own gathering at 2 p.m. for 4 p.m. in Vali Asr. It was, conveniently, set for an hour before the planned Mousavi gathering in the same place. Mousavi had to tell his followers NOT to go to the pro-Mousavi march.

Iranian authorities have also now forbidden all foreign journalists from firsthand reporting on the streets.

Iran's Guardian Council, a powerful government organization, agreed Tuesday to a limited recount of votes in the nation's recent disputed presidential election. However, Mir Hossein Mousavi, the main opposition candidate to current Iranian President Mahmoud Ahmadinejad, rejected the recount and instead demanded a new election entirely. Last Friday, Ahmadinejad was named the victor of the election by a huge margin. Ahmadinejad is at a summit in Russia today.

The Guardian Council is composed of influential clerics and judges and their announcement about the recount came as a surprise. It is unclear how many ballots Iranian authorities will actually recount.

Meanwhile, violence continued in Tehran today. Protests clogged city streets and eyewitnesses claimed plainclothes militia members beat protesters. Yesterday, there was confirmation of one death in the protests, but state radio has now reported the death of seven people during a mass rally Monday night in Tehran.

The U.S. government has yet to directly condemn the election results. On the "Today" show this morning, Sen. John McCain, R-Ariz., said that the U.S. "must speak out forcefully on Iran" (video is below). McCain added that President Barack Obama should "speak out that this election is flawed," a position that many foreign affairs experts have contradicted.