As the power struggle continues in Iran, the regime is trying to take the wind out of the protesters' sails 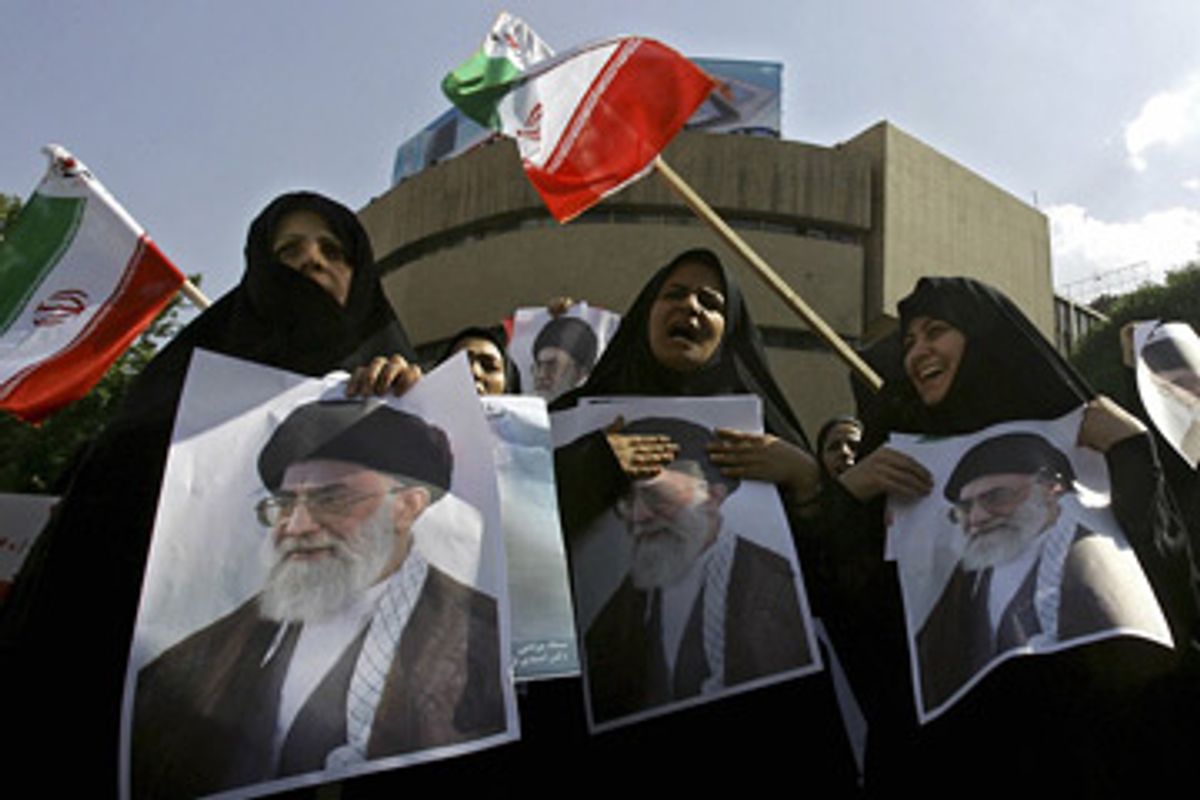 They have no intention of backing down: Supporters of opposition leader Mir Hossein Mousavi are out on the streets again on Wednesday, in order to protest against the results of last Friday's presidential election. Once again they are gathering for a rally in the center of Tehran to demonstrate against what they see as election fraud in favor of the incumbent president, Mahmoud Ahmadinejad.

Tens of thousands of Mousavi supporters are reported to have gathered in the north of the capital on Tuesday to peacefully demonstrate against Ahmadinejad, despite police violence and suppression. The 67-year-old Mousavi had called on his followers to call off the march out of fear for their safety. However, his calls were ignored. It is not so easy to stop the wave of protest.

For their part, the rulers in Iran are playing for time. They make a few concessions here and a few accusations against foreigners there, and otherwise hope that the opposition movement will soon run out of steam.

The leadership is turning to tried-and-tested tactics to try to get the explosive situation under control. The most important propaganda instruments are the state-controlled radio and TV stations. On Tuesday evening, thousands of demonstrators gathered in front of the headquarters of the national radio station in Tehran and held a sit-down protest for hours, insisting they be given airtime for their demands. That didn't prevent the same radio station from giving its own version of events: It repeatedly broadcast that foreign agitators were to blame for the chaos on Iranian streets.

At the same time the government TV station admitted that there had been mass protests, not just in Tehran but also in the big cities of Shiraz and Isfahan. A news presenter reported on clashes between demonstrators and security forces in the northern province of Kurdistan. However, he made sure to emphasize that foreigners had a hand in the events everywhere. Iran's citizens should be careful whom they are influenced by at the moment, he said.

Those in power are also employing this double-sided tactic of acknowledgment and warning. Iran's Parliament Speaker Ali Larijani, who as former chief negotiator in the nuclear talks with the West is used to communicating in a crisis, criticized the bloody attack on student dorms in Tehran on Monday night. The Interior Ministry should clarify why the security forces destroyed the building and why students were injured or even killed, he said.

However, Larijani did not forget to point out that foreign forces were behind the protest movement -- and to then rail against the supposed puppet masters abroad, saying that Iran would not tolerate the interference of the U.S. and other Western countries. "He should govern his own country," Larijani said, referring to U.S. President Barack Obama. The suspicion that the demonstrators have been influenced by foreign agitators or that they could even be cooperating with foreigners is extremely dangerous for the opposition. Accusations of spying are hanging in the air and could conceivably be used against any demonstrators who are arrested.

The West is searching for ways to react to the explosive situation. How can it give moral support to the demonstrators without raising the suspicion that it is interfering?

In Washington, U.S. President Barack Obama has openly addressed the dilemma in responding to Iran. "It's not productive, given the history of U.S.-Iranian relations, to be seen as meddling," he said, alluding to the CIA-instigated coup against Iran's democratically elected Prime Minister Mohammad Mossadeq in 1953.

All that is left to the opposition supporters in the West is the media. Since the beginning of the protests, many Iranians' main sources of information have been the U.S.-financed broadcaster Voice of America and the BBC's Farsi-language service. In addition, the online social networking sites Facebook and Twitter, both used mainly in the U.S., have been extremely important for the protest movement.

The U.S. government realizes how valuable these sites are. On Monday, Twitter co-founder Jack Dorsey received an official e-mail from the White House asking him to postpone maintenance work on the site: The administration wanted to avoid Twitter being turned off in Iran. The New York Times called it a "new-media milestone." The U.S. was admitting that a blogging service that is not even four years old "has the potential to change history in an ancient Islamic country."

Given that the traditional media in Iran are controlled by the state, the opposition's only choice is to use the Internet to mobilize -- and so far they have clearly had success. The power struggle on the streets is in full swing, with daily protests and clashes with the security forces. The question remains how long the protesters can persevere with the exhausting confrontation. Those in power are banking on the protests losing momentum.

The cliffhanger will certainly continue for at least one week. By then, the electoral commission will have completed the review of the election outcome ordered by Ayatollah Ali Khamenei and will have announced the new results. The fact that the country's religious leader has ordered the votes from some polling stations to be recounted is another clever move on his part. By yielding to the demands of protesters, Khamenei is showing that the state's power structures are flexible.

Above all, however, the revolutionary leader has bought himself time. The ayatollahs and jurists in the all-powerful Guardian Council now have seven to 10 days to decide what action to take. Hardly any observer in Iran imagines that the electoral commission will come up with a significantly different result after the recount. The loss of face for the Supreme Leader Khamenei, the Guardian Council and the regime would simply be too big.

In the days remaining until the announcement of the revised results, a new course will be set in Iran. It will probably be a hard time for the demonstrators. Since Tuesday, the regime has blocked reporting by Western journalists in the country, who are no longer allowed to leave their offices. It's possible that this move will give the security forces the protection they need to put down the protests with greater violence. The regime may be calculating that when the new version of the old results are released in a little over a week, the opposition could have lost its taste for further protests.