One of the rarest media commodities -- someone who criticizes Democrats "from the Left" -- just got rarer still. 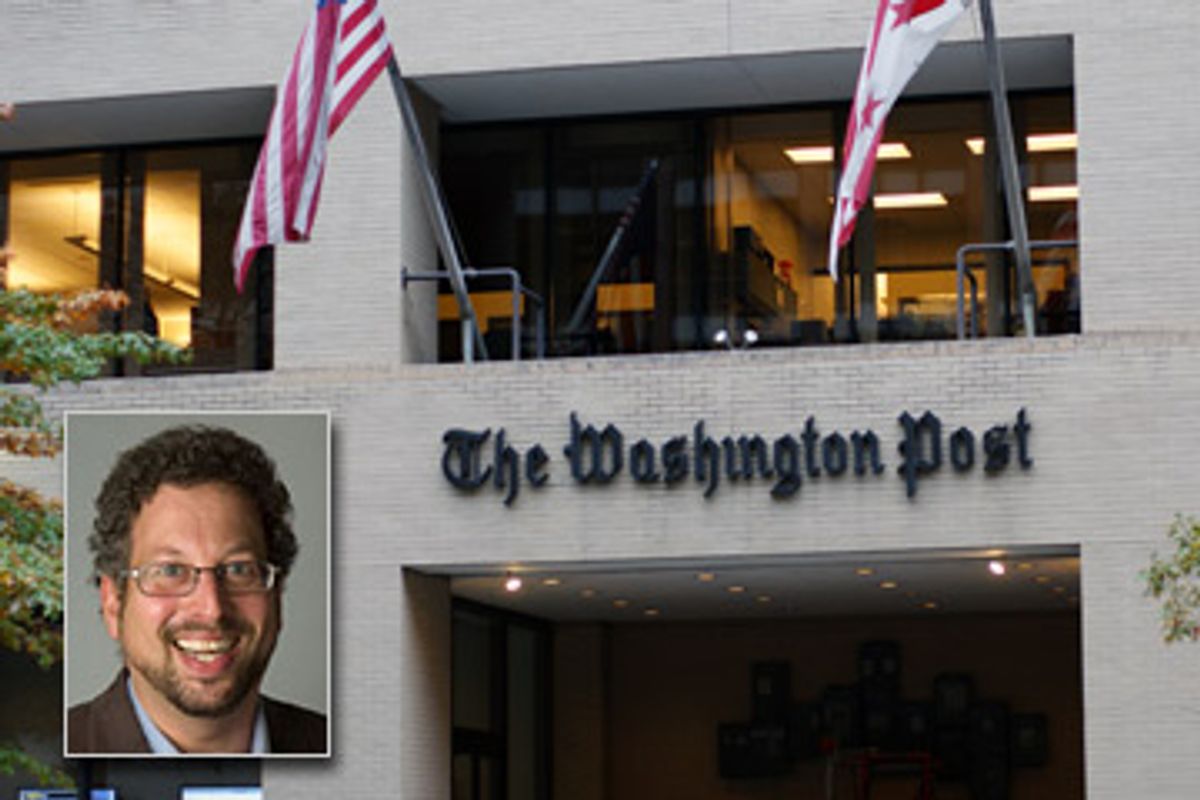 One of the rarest commodities in the establishment media is someone who was a vehement critic of George Bush and who now, applying their principles consistently, has become a regular critic of Barack Obama -- i.e., someone who criticizes Obama from what is perceived as "the Left" rather than for being a Terrorist-Loving Socialist Muslim.  It just got a lot rarer, as The Washington Post -- at least according to Politico's Patrick Gavin -- just fired WashingtonPost.com columnist, long-time Bush critic and Obama watchdog (i.e., a real journalist) Dan Froomkin.

What makes this firing so bizarre and worthy of inquiry is that, as Gavin notes, Froomkin was easily one of the most linked-to and cited Post columnists.  At a time when newspapers are relying more and more on online traffic, the Post just fired the person who, in 2007, wrote 3 out of the top 10 most-trafficked columns.  In publishing that data, Media Bistro used this headline:  "The Post's Most Popular Opinions (Read: Froomkin)."  Isn't that an odd person to choose to get rid of?

Following the bottomless path of self-pity of the standard right-wing male -- as epitomized by Pete Hoekstra's comparison of House Republicans to Iranian protesters and yet another column by Pat Buchanan decrying the systematic victimization of the white male in America -- Charles Krauthammer last night said that Obama critics on Fox News are "a lot like [Hugo Chavez'] Caracas where all the media, except one, are state run."  But right-wing polemicists like Krauthammer are all over the media.

In addition to his Rupert Murdoch perch at Fox, Krauthammer remains as a regular columnist at the Post, alongside fellow right-wing Obama haters such as Bill Kristol, George Will, Jim Hoagland, Michael Gerson and Robert Kagan -- as well as a whole bevy of typical, banal establishment spokespeople who are highly supportive of whatever the permanent Washington establishment favors (David Ignatius, Fred Hiatt, Ruth Marcus, David Broder, Richard Cohen, Howie Kurtz, etc. etc.).   And that's to say nothing of the regular Op-Ed appearances by typical Krauthammer-mimicking neoconservative voices such as John Bolton, Joe Lieberman, and Douglas Feith -- and the Post Editorial Page itself.  "Caracas" indeed.

Notably, Froomkin just recently had a somewhat acrimonious exchange with the oh-so-oppressed Krauthammer over torture, after Froomkin criticized Krauthammer's explicit endorsement of torture and Krauthammer responded by calling Froomkin's criticisms "stupid."  And now -- weeks later -- Froomkin is fired by the Post while the persecuted Krauthammer, comparing himself to endangered journalists in Venezuela, remains at the Post, along with countless others there who think and write just like he does:  i.e., standard neoconservative pablum.  Froomkin was previously criticized for being "highly opinionated and liberal" by Post ombudsman Deborah Howell (even as she refused to criticize blatant right-wing journalists).

All of this underscores a critical and oft-overlooked point:  what one finds virtually nowhere in the establishment press are those who criticize Obama not in order to advance their tawdry right-wing agenda but because the principles that led them to criticize Bush compel similar criticism of Obama.  Rachel Maddow is one of the few prominent media figures who will interview and criticize Democratic politicians "from the Left" (and it's hardly a coincidence that it was MSNBC's decision to give Maddow her own show -- rather than the endless array of right-wing talk show hosts plaguing television for years -- which prompted a tidal wave of "concern" over whether cable news was becoming "too partisan").   In general, however, those who opine from the Maddow/Froomkin perspective are a very endangered species, and it just became more endangered as the Post fires one if its most popular, talented, principled and substantive columnists.

UPDATE:  I just confirmed with Froomkin that Gavin's report is true, and hope to have some comment from him once he decides what he wants to say.

A simply astounding move by the paper - getting rid of the one blogger, Dan Froomkin, who kept it real and kept it interesting. Dan's work on torture may be one reason he is now gone. The way in which the WaPo has been coopted by the neocon right, especially in its editorial pages, is getting more and more disturbing. This purge will prompt a real revolt in the blogosphere. And it should.

The single most transparent and damaging myth in American political discourse is also one of the most unquestioned:  The Liberal Media.

I’m terribly disappointed. I was told that it had been determined that my White House Watch blog wasn’t "working" anymore. But from what I could tell, it was still working very well. I also thought White House Watch was a great fit with The Washington Post brand, and what its readers reasonably expect from the Post online.

As I’ve written elsewhere, I think that the future success of our business depends on journalists enthusiastically pursuing accountability and calling it like they see it. That’s what I tried to do every day. Now I guess I'll have to try to do it someplace else.

The Post's inability to articulate a coherent, credible explanation for what it did speaks volumes.  Any media outlet is foolish if it doesn't strongly consider taking advantage of the Post's conduct by hiring Froomkin.