The real action in Iran is in the streets. Social media is documenting the revolution -- not leading it 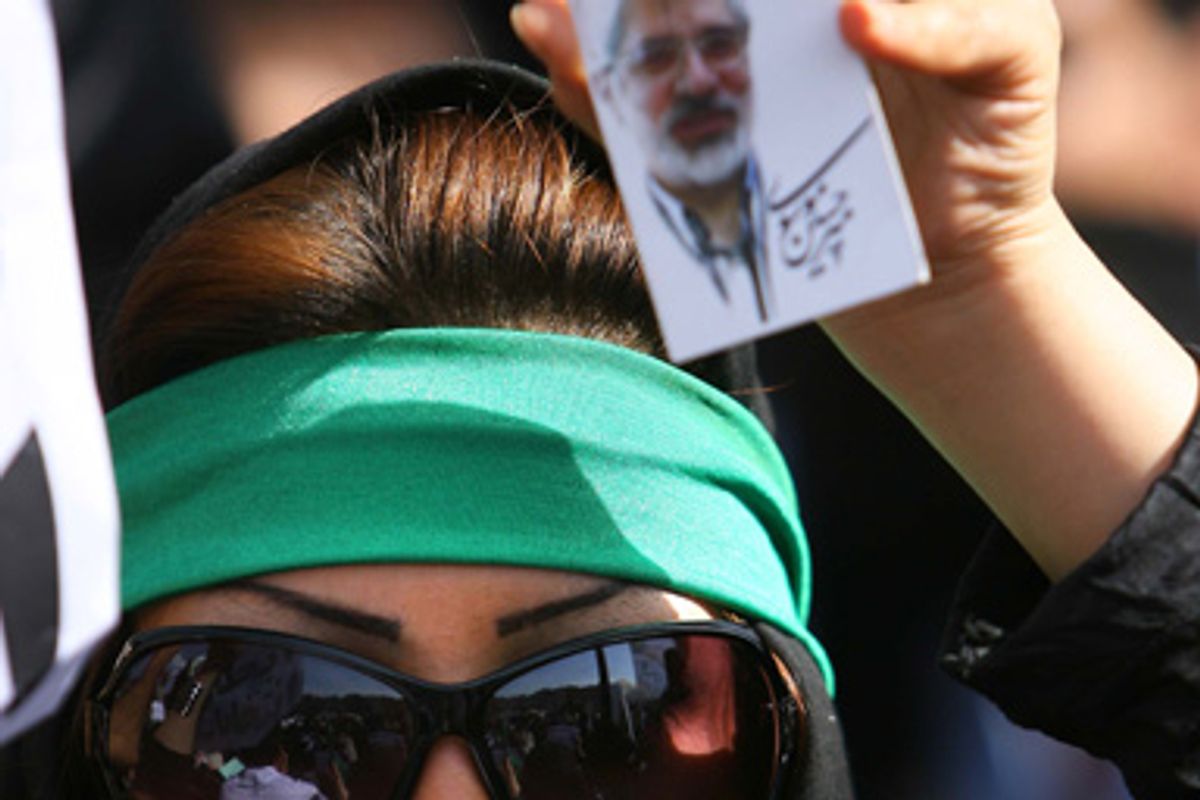 In this image made available from Mousavi's election campaign media operation Ghalam News, shows a supporter of opposition leader Mir Hossein Mousavi, as she holds his photo as she listens to his speech at a demonstration in Tehran on Thursday June, 18, 2009.
--

You've tinted your Twitter picture green. You've tweaked the settings on your social networking accounts so it looks for all the world like you're in Tehran. You carefully edit out any Persian-sounding screen names from all the news bulletins out of Iran that you pass along to your own network. Maybe you've even launched futuristic-seeming attacks from your laptop that you're sure will help fight back against the Supreme Leader and his e-cronies.

But before you -- or the media -- get too carried away with all the Iranian cyber-activism, take a step back. Yes, Twitter, Facebook, Flickr and other social media sites are helping the world outside Iran learn about what's happened there since last Friday's apparently phony elections, especially since the regime has barred foreign journalists from doing their job. And the eruption of solidarity in the U.S. and around the world is clearly important symbolically. Still, so far there isn't much evidence that the Internet is driving events in Tehran -- the protesters don't seem to be using it to plan, and the government's hackers don't seem to be doing as much of the malicious tracking as people here think they are. The revolution, to borrow the Gil Scott-Heron-inspired phrase that's been thrown around a lot in the last week, may not actually be Twittered, after all.

Start with the question of what the state security forces are doing about -- and with -- all the #iranelection tweets (that's the Twitter shorthand most people are using to write about the protests). Iran has been living under a closed, repressive government for 30 years. The country's estimated 60,000 active bloggers have had to deal with service interruptions, random blocks and occasional surveillance for years, according to a January study by the OpenNet Initiative. Most of the country's Internet traffic routes through a very small number of central backbones, so theoretically, officials could easily monitor what's being said and written about the unrest. U.S. observers don't know a whole lot about the way the Iranian government patrols the Internet, though. When the addresses of secret proxy servers -- used to get around Iranian censorship -- have been put on Twitter or in public forums this week, they've been blocked or attacked, said James Cowie, chief technology officer and a co-founder of Renesys, an Internet consulting firm that's been watching Iran's connectivity this week. Iran recently bought more Internet monitoring systems from Nokia Siemens Networks, a joint venture by the Finnish and German tech companies, and authorities may be intercepting more private communications lately.

But it's likely that anyone brave enough to be Twittering the protests this week was already known to the authorities. And the actual violence in the actual streets is far more of a threat to the Iranian opposition movement than any online surveillance -- yet it hasn't kept the marches from happening. "The protesters in Iran have crossed the line at this point -- there's a line that they've crossed, and there's really no going back," said Goli Fassihian, a spokeswoman for the National Iranian American Council. "The fear of being beaten and the potential violence on the street is certainly a concern, but I have not heard from anybody that it's stopping them from going in the streets." Contacts in Iran aren't reporting much particular anxiety about what they're doing online, Fassihian said. Once you're already marching outside a government building even though Basij paramilitaries are shooting into the crowd, putting something on Twitter isn't really a significant additional risk. And since Twitter doesn't require users to publish their real names or other identifying information, tracking them might not be that easy, even if you control the major Internet pipelines into the country. Some of the most active Iranian Twitterers have noted that they don't mind having their usernames out there.

That may be because the Iranian regime has bigger problems to deal with than social media. "The government has people with stones throwing them into the government buildings," said Evgeny Morozov, a blogger for Foreign Policy and a fellow at George Soros's Open Society Institute who has studied the use of technology to fight authoritarian regimes. "Looking at people's communications -- at this point I don't think it's a priority." Cowie agreed. "With things the way they are, I'd be surprised if they could pay a lot of detailed attention to the content [of Internet traffic] other than just finding sites to add to the list to block," he said.

Though U.S. media outlets can't get enough of the idea that Twitter -- already a press darling -- is the greatest thing to hit the democracy movement since Gandhi, reality is a little more complicated. Authorities in Iran probably realize that the Tweets and Facebook updates aren't the main threat to the status quo right now -- instead, it's what's happening in the real, not virtual world. Iranians who are Twittering the protests are mostly doing to help spread the word to people outside Iran, not inside the country (as Business Week and Slate have noted). "The main message with respect to social media and Twitter is not so much that it's having an impact on the political situation in Iran," Fassihian said. "What those tools are really having an impact on is how the outside world is viewing what's happening in the country." Relatively old-fashioned text messages, using cell phone networks that also appear to be straining during the crisis, is helping to spread the word much better than any newer tools. So the idea -- which even the State Department seems to believe -- that Twitter is essential for organizing the rallies and marches in Tehran is a little much. "That would be really stupid," Morozov said. "If you want to plan a revolution, you never do it in public -- the authorities show up and arrest everyone. It's just beyond me that somebody would start posting locations on secret meetings on Twitter."

Activists and observers say Iranian authorities are mostly using the Internet to obscure the free flow of information, choking network traffic in and out of the country to a standstill in order to prevent Iranians from reading -- or writing -- updates on the situation. Most Internet users in Iran still rely on slow dial-up connections; it doesn't take much interference from the government to make the Internet effectively unusable in a crisis. Iranian Americans say they've noticed a steady drop-off of electronic communications from friends and family in Iran, as congestion meshes with the country's already heavy censorship to make it hard to get through. YouTube reported earlier this week that traffic from inside Iran was down 90 percent from its usual levels. But interestingly, Renesys found that Iran's outbound connections to the rest of the world were still functioning. "While the domestic Internet is obviously being throttled and is extremely crowded and almost unusable, the pipes to the outside world continue to be intact," Cowie said. That may be in part because Iran -- despite years of sanctions -- can't keep its economy running if it cuts itself off entirely from the world outside its borders.

Some of the activity from outside Iran could actually be counterproductive. Taking advantage of the Twitter interest, Iranian intelligence operatives appear to be spreading disinformation online now -- which means U.S. supporters of the revolution who pass along messages they find about Iran might be helping the regime instead. The well-meaning attempts to bring down Iranian government Web sites slow traffic for dissidents almost as much as they do for ardent defenders of Mahmoud Ahmadinejad, network experts say. And if everyone changes their Twitter location, it's hard to know who's actually providing reports from the scene in Tehran and who's really in Teaneck. That might confuse the Iranian authorities, but it also confuses people around the world who are trying to figure out what's actually going on there. "It's slacktivism," said Morozov. "It doesn't require much effort -- you can still be a slacker and search the Web -- but you have great ability supposedly to influence events in Iran."

That may be a little harsh, though. The crackdown by Iranian authorities on traditional journalism means Twitter and Facebook updates -- at least the ones by people who are actually there -- are providing a real service; the more widely the message is spread, the more the world can be outraged by the government's oppressive reaction to the protests. Still, the Internet isn't causing a revolution -- it's documenting it. That's plenty to be proud of, without needing to exaggerate things in the name of solidarity. So keep the Tweets coming. Just don't forget that the real action -- and the real risk -- isn't happening anywhere near a computer.