President Obama has not betrayed the gay community

Despite early missteps, granting benefits to the same-sex partners of federal employees is proof he hears us 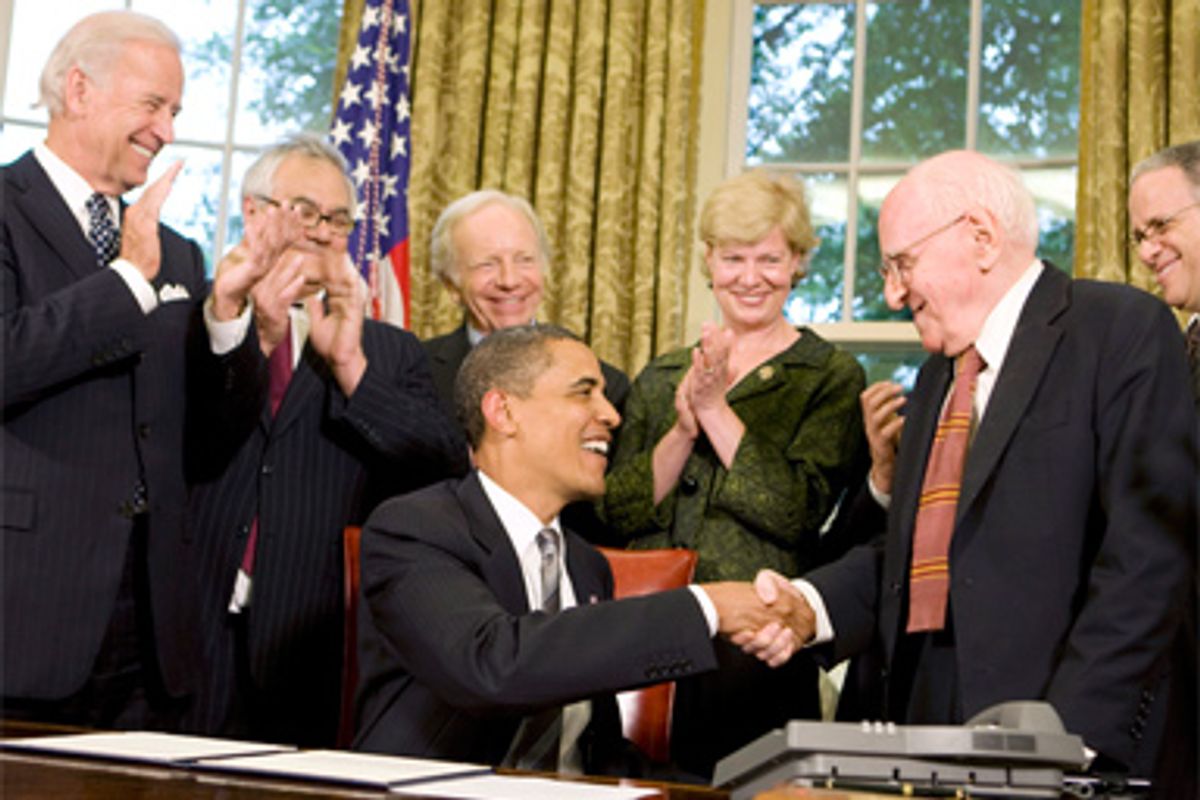 In the first 150 days of the Obama administration, starting, actually, with the invocation at his inauguration, President Obama has had a rocky relationship with the lesbian, gay, bisexual and transgender community. LGBT folks, flashing back to the disappointment of watching President Clinton sign the Defense of Marriage Act, felt victimized again last Friday when another Democratic president filed a brief defending DOMA -- and when they read descriptions in the gay media of that brief that claimed it compared us to pedophiles and practitioners of incest.

The brief, though, is not so clearly the assault some have made it out to be. Nor is the Obama administration's relationship with the LGBT community as irreparably damaged as some insist. Others -- including myself -- see the actions of the past week as a sign for hope about real progress toward LGBT equality.

I, like many other gay men, lesbians and bisexual and transgender people, greeted the new administration with cautious optimism. It was more than the hope that greets any new occupant of the White House. In Obama's speech on race, in particular, I saw the possibility that our new president could be a transformational figure on the "gay debate."

As Jan. 20 approached, I took Obama at his word that his choice of evangelical pastor Rick Warren for his inauguration was exactly what he promised: real recognition of multiple viewpoints without demonization of those with whom we disagree. I also took him at his word that he, as president, would be a "fierce advocate" for LGBT equality.

As the inauguration gave way to governing, I saw that Lt. Dan Choi was being fired, by President Obama, for being openly gay. I criticized Obama's lack of action on Don't Ask, Don't Tell, which I followed up by questioning Obama's choice of Rep. John McHugh to serve as secretary of the Army. Obama's spokesman, Robert Gibbs, quickly responded to such criticism, in a briefing, that McHugh, like Obama, believed that the current policy was not working and that both would work to fulfill Obama's campaign pledge to repeal Don't Ask, Don't Tell.

Then, this past Friday, I awoke to word at AmericaBlog, the Web site of gay activist blogger John Aravosis, that "Obama defends DOMA in federal court" and "invokes incest and marrying children." I was appalled. Aravosis also wrote in another post that the DOJ was "lying" when it said that Justice "generally ... defend[s] the law on the books in court." Then I looked at the brief. I agreed with Aravosis that the brief went too far in some of the language it used in its defense of the statute. But, looking at the law and past cases, I disagreed that the Obama administration had a real choice about whether it would defend DOMA in court and that DOJ's brief "compared us" to incest and pedophilia. And, because some in the community have kept pushing those stories -- despite contrary opinions from Laurence Tribe, Nan Hunter, Robert Raben and others -- I've spent the past week attempting to dispute those claims..

It is clear that the brief defending DOMA, despite whatever legal and political realities might underlie its filing, struck a nerve with the LGBT community. It was an old nerve -- Clinton's DOMA signing -- scraped raw once again. People have felt genuinely, personally injured by the very fact that the brief was filed, and their defenses have led them to fight. But the brief is not reason enough for a rupture between President Obama and the gay community. For those who believe in full equality for LGBT people in our country, it's time to move the discussion beyond the fight over that DOMA brief.

Wednesday night, President Obama -- sitting in the Oval Office with Human Rights Campaign president Joe Solomonese and out gay Reps. Tammy Baldwin and Barney Frank, among others, behind him -- took the first step toward moving the discussion forward. He signed a memorandum ordering agency and department heads to, among other steps, "extend the benefits they have respectively identified to qualified same-sex domestic partners of Federal employees" where possible under current law. Even Michelangelo Signorile, the longtime LGBT activist who once outed then-closeted Pentagon spokesman Pete Williams to point out the first Bush administration's hypocrisy, agreed that these actions have shown that "we have made our point."

I think we have made our point. Fair, consistent, vocal criticism leveled against those who do not help advance LGBT equality works. Whether spread on the Internet or across statehouses or at a march, we have shown -- and they have shown -- that our voices send a strong message to this White House. Rep. John McHugh, the Army secretary nominee, himself has issued a statement affirming his desire to change the law that doesn't allow gay people to serve openly in the military.

Wednesday's events made it clear once again that the Obama administration has heard us. The administration has taken a step forward, and so should we. Demonizing Obama or openly gay leaders like Frank, Baldwin or Solomonese (which is not the same as fairly criticizing them when we disagree with their actions) is not the way to move the ball forward.

Despite criticisms of Obama's memorandum issued Wednesday, it was a solid, if small, step forward in which he shared with the nation his desire to see DOMA repealed and, before that even, the Domestic Partner Benefits and Obligations Act passed in Congress. As Rep. Baldwin explained Wednesday evening on "The Rachel Maddow Show," Obama's voiced support for the bill sends a strong signal to Congress -- one that she believes will help propel the bill forward.

Yes, there is more that the LGBT community -- from Rep. Frank all the way down to that "young, gay person" in San Antonio whom Harvey Milk's constant voice reminds us to keep in our thoughts -- must achieve before we will live in a country where we have full equality. Yes, we must constantly push our leaders -- whether gay or straight -- to take bold actions and be fierce advocates on those issues. And, yes, we do deserve -- and should expect -- nothing less.

Our leaders, though, deserve nothing less from us than fair and honest debate and direction as we advance on the way toward that goal. That is the path that will lead us multitudes to the equality we seek.

Chris Geidner is an attorney who has practiced in state government and the private sector. He is the editor at Law Dork, 2.0 and tweets @chrisgeidner on Twitter.