The president should be a revolutionary, not just a reformer 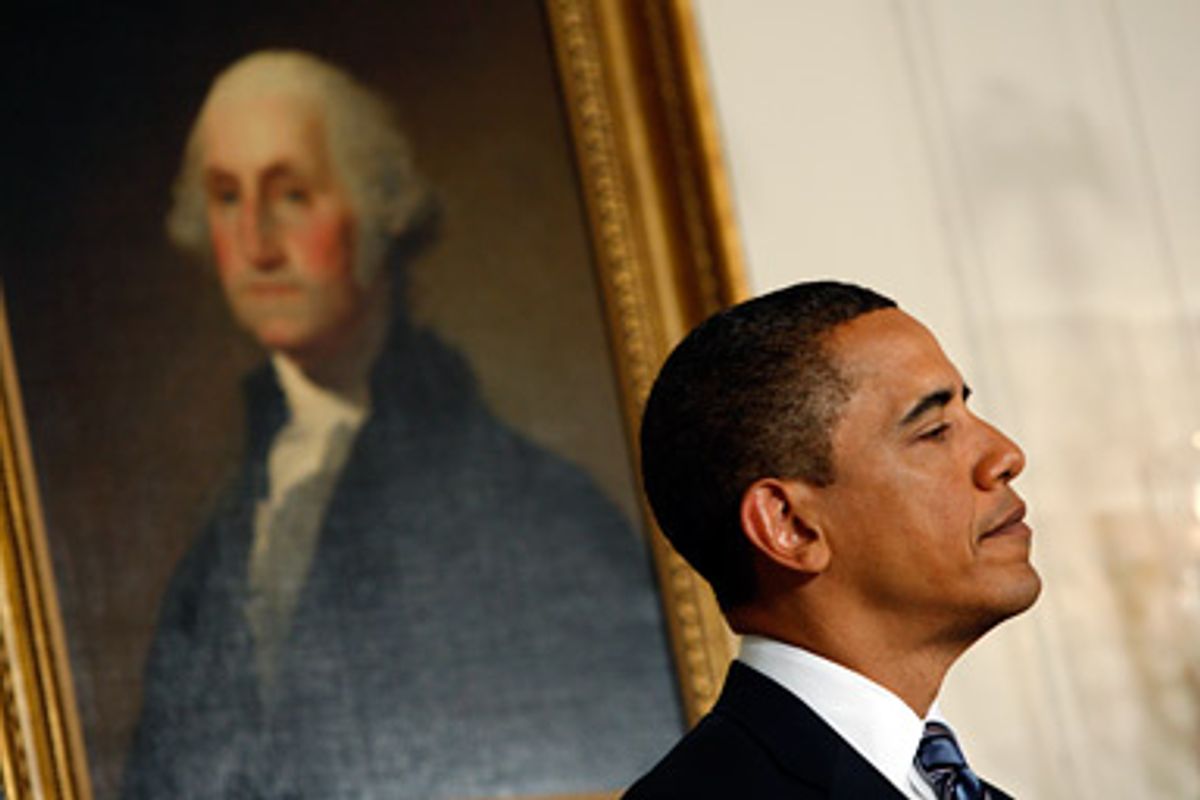 U.S. President Barack Obama is pictured alongside a portrait of the first U.S. President George Washington, as Obama announces his nomination for Secretary of the Army, Congressman John McHugh (R-NY) in the Diplomatic Reception room of the White House in Washington, June 2, 2009.
--

All of these inventors envisaged machines, theories and societies that never before existed. And that's why for all the positive, even admirable steps Obama's America seems poised to take, the aspirations still seem too small, too unimaginative, too confined by old parameters and old conceptions of how things have always worked.

Consider the Wall Street bailouts. By simply giving banks trillions of dollars with no strings attached, our government theorizes that the problem is not the financial system, but a momentary cash drought that can be solved by temporary recapitalization. These bailouts do not aspire to change the whole industry into one dominated by many small institutions rather than a few big ones. They also don't reach for "a tightly regulated banking system, which made finance a staid, even boring business," as Paul Krugman said we once had -- they envision the same get-rich-quick casino that generated huge profits and huge losses.

On healthcare, even as the Obama administration pushes to create a public option for consumers to buy into, most of the proposals for universal healthcare being debated in Washington still imagine a system integrally involving private insurance companies. In fact, the one proposal that sees a new healthcare system without those companies -- a single-payer system -- has been shoved to the side by both parties as too radical.

Same thing, again, for efforts to address global warming. Bills compelling companies to cap their carbon pollution and then trade it for credits are positive steps. However, they still embrace an energy system that relies on fossil fuels -- and they don't strive for a day when we power our economy primarily with clean renewable energy.

I could go on, but you get the point. We are suffering from a lack of imagination -- a failure of "the vision thing," as George H.W. Bush once called it.

Part of that is a product of a money-dominated political system whose most powerful forces don't want anything reimagined because they have a vested interest in the no-imagination status quo.

Another part of that shortsightedness, however, stems from our president's natural disposition. When I interviewed him in 2006, he acknowledged that the difference between reimagining institutions and aiming only to tinker with them is always the question that determines a political era. "Are you a revolutionary or are you a reformist?" as he put it before firmly stating which one he is.

"I think within the institutional structures we have, we can significantly improve the life chances of ordinary Americans," he said.

There's certainly merit to that line of thinking. We can, in fact, improve things for a lot of people by simply making many existing institutions work better. Patch a few banks, revamp the private insurance system, and fiddle with our existing energy policies and we can prevent hundreds of financial industry bankruptcies, thousands of unnecessary deaths, and millions of tons of carbon emissions. Those would be no small achievements.

However, if that's all we aim for, then we will have passed up this historic opportunity to structurally transform the country for the long haul. In short, we will have missed the chance not just to tweak, but to dream again.