Stimulus funds have kept healthcare and education afloat. No such luck for America's bus and light-rail riders 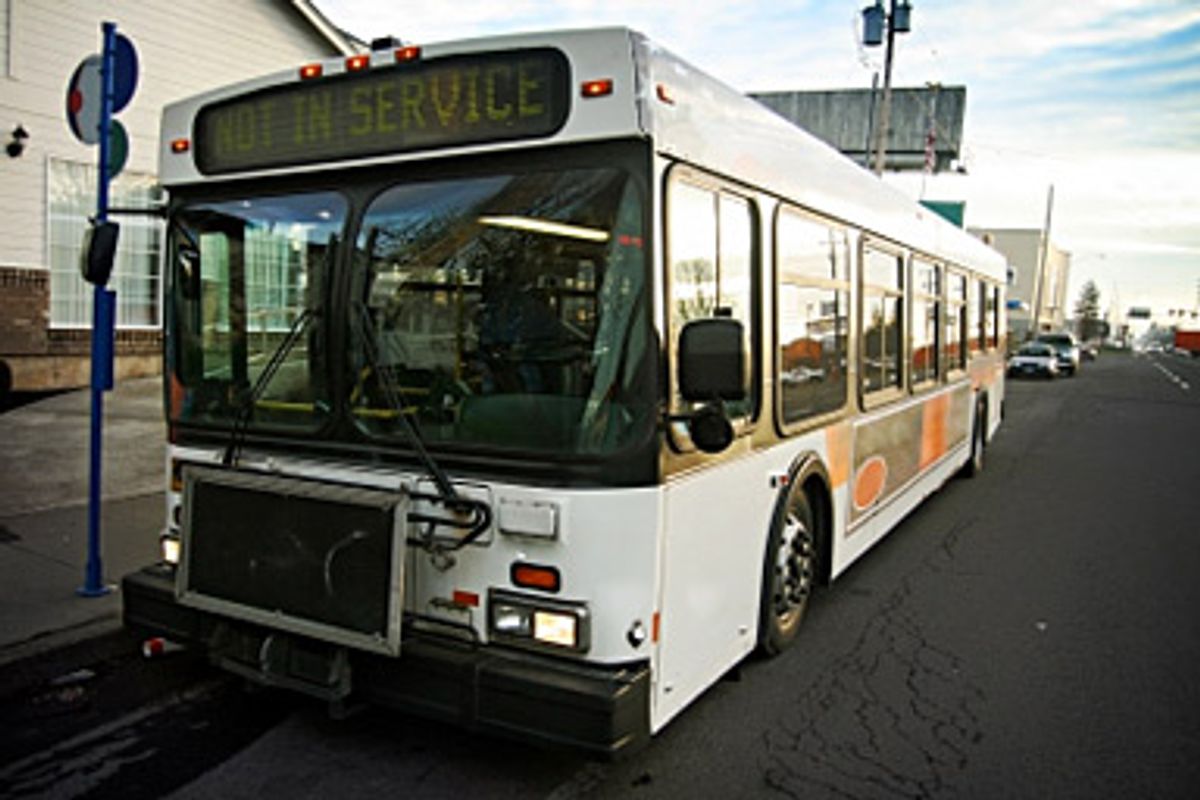 When the recession forced the strapped St. Louis Metro to cut her local bus route in March, Emma Perry's freedom went along with it.

Perry, 58, uses a wheelchair because of a rare neurological disease. For the last six years, the St. Louis Metro's Call-A-Ride program, which provides door-to-door transit for disabled citizens -- so long as they are within three-quarters of a mile of a normal bus route -- has granted Perry the independence to go to the library, the movie theater, her health center, the nursing home where she volunteered and the church where she taught and prayed three to five times a week.

With the nearest route gone, Perry lost her Call-A-Ride service. She's now largely homebound. "I've lost some of my independence," she says. "I'll never get used to it."

Federal stimulus funds have swooped in to prevent service cuts to healthcare and education, but no such remediation has been granted to public transit. Transit systems nationwide are getting billions for new buses and trains. According to the language of the stimulus bill, however, the money can't be spent to run them -- to pay for operating costs like wages and fuel. Although national mass-transit ridership is at a 50-year high, a recent survey by the American Public Transportation Association found that 90 percent of transit agencies have cut service or raised fares.

"One of the difficulties is that capital funds are available," said Alane Masui, a spokeswoman for the Sacramento Regional Transit District, "but we need to operate the buses we purchase."

On Thursday, the Senate passed a $106 billion war-funding bill with a partial fix. The bill includes a provision allowing transit agencies to use up to 10 percent of their stimulus money for operating costs. The legislation will now go to President Obama for signing, even though the transit provision has drawn criticism as shortsighted.

"To use money that was supposed to go toward infrastructure investments for simply operating expenses is wrong," said Rep. Tom Latham, R-Iowa, ranking member on the House subcommittee that controls transportation spending. “This is supposed to be a stimulus package for infrastructure, not a bailout for local government.”

Latham is concerned that transit agencies will become reliant on the money, which disappears in two years, rather than finding sustainable local funding sources, or that the government will be prodded to pay for transit operations indefinitely. "There's nothing more permanent in government than a temporary program," Latham said.

Even with stimulus money newly available for operations, many transit agencies will be balancing services against long-needed upgrades. "Flexibility is welcomed," said Ted Basta, chief of business services for the Metropolitan Atlanta Rapid Transit Authority, "but in our case, it will be which house to rob to help the other side."

The deep trouble for transit agencies has been a decade in the making. Since 1999, urban areas with more than 200,000 people have been barred from using federal transit funds to cover operating costs. President Obama's stimulus plan carried that theme forward by mandating that the $8.4 billion in stimulus transit funds go only toward capital improvements, essentially construction and new purchases, and not toward filling operating holes, like the $50 million deficit that St. Louis Metro is facing.

When the transit provision becomes law, St. Louis Metro will be able to use $8 million in stimulus funds to cover a portion of the deficit, but it's not enough to restore all the decimated suburban bus service or the hundreds of jobs that were lost. In March, Metro closed 2,300 bus stops and cut 450 workers.

The stimulus money might be combined with $12 million in new state funds to bring back a third of the lost service. Meanwhile, some of the stimulus capital money will replace rail ties, according to Tom Shrout of Citizens for Modern Transit, a group that advocates expanding St. Louis transit. "That's fine," Shrout says, "but it doesn't have to be done now, and we'll lose riders for years if there's a service cut."

In New York, the state took evasive action to preempt a $1.8 billion deficit at the Metropolitan Transit Authority, which runs New York City subways and buses and suburban commuter rail lines. Still, the MTA had to boost fares about 10 percent even as it spent stimulus money on a subway line that has been delayed for decades.

The MTA would not comment on whether funds, if they become available for operating costs, would be used to eliminate or reduce fare increases. But even if the entire 10 percent of allowable stimulus spending in the state of New York were used just to repair the MTA's deficit, it would not fill the hole.

Gene Russianoff, an attorney with the New York City Straphanger's Campaign, which advocates on behalf of transit riders, supports some of the MTA's capital projects. But he bemoans the loss of 570 customer service agents in train stations. "The MTA [safety] slogan is 'If you see something, say something,'" he says. "But to whom?"

In desperation, some transit agencies have shuffled money around, trying to find any way that restricted state and stimulus funds can plug operating and maintenance holes.

The MARTA system in Atlanta faced cuts so steep that officials threatened to eliminate an entire day of service each week. So the Atlanta Regional Commission, an intergovernmental planning agency, agreed to give MARTA $25 million in stimulus funds for "preventative maintenance," which is allowed by the stimulus bill. In return, MARTA will give the ARC $25 million from its own capital projects coffers, money that according to state law could only have been used for new projects.

"It's this crazy round-robin of trying to find ways to actually operate the transit that got funded in the stimulus," says David Goldberg, a spokesman for Transportation for America, a national coalition of mass-transit backers that includes foundations, AARP, and environmental, bicycle and pedestrian advocates..

In light of the drastic transit cuts in his state, Rep. Russ Carnahan, D-Mo., has proposed federal legislation that would remove the ban on spending transit money for operations in cities of 200,000 or more. "The congressman has signed on to letters to open up some of the [stimulus] money," says Jim Hubbard, a spokesman for Carnahan, "but this would be a long-term fix."

Carnahan's bill could be a lifeline for agencies like the Sacramento Regional Transit District. California, which is confronting a $24 billion state budget deficit, eliminated public transit funding for the next five years. So SRTD is trying everything, including partnering with Coca-Cola, which will pay to install kiosks with vending machines and advertising at light rail stations.

Despite employee furloughs, a hiring freeze, a MARTA-like shuffling of stimulus money, a fare hike in January -- and another one going to a vote on Monday -- Sacramento may have to cut service on more than 10 percent of bus routes.

The stopgap provision in the war funding bill will free up $2.2 million in stimulus funds for operating costs. "I would seriously consider using that," said Mike Wiley, general manager and CEO of the SRTD. "The No. 1 priority for us is maintaining our level of service on the street."

David Epstein is currently a staff writer at Sports Illustrated, which gave him temporary leave to come to ProPublica. He's been a reporter at Washington, D.C.-based Inside Higher Ed, and his work has appeared in a variety of national publications, including Scientific American and U.S. News and World Report.