Obama gets drug companies to cut senior drug bills by $80 billion. Suddenly, his plan is no longer dead 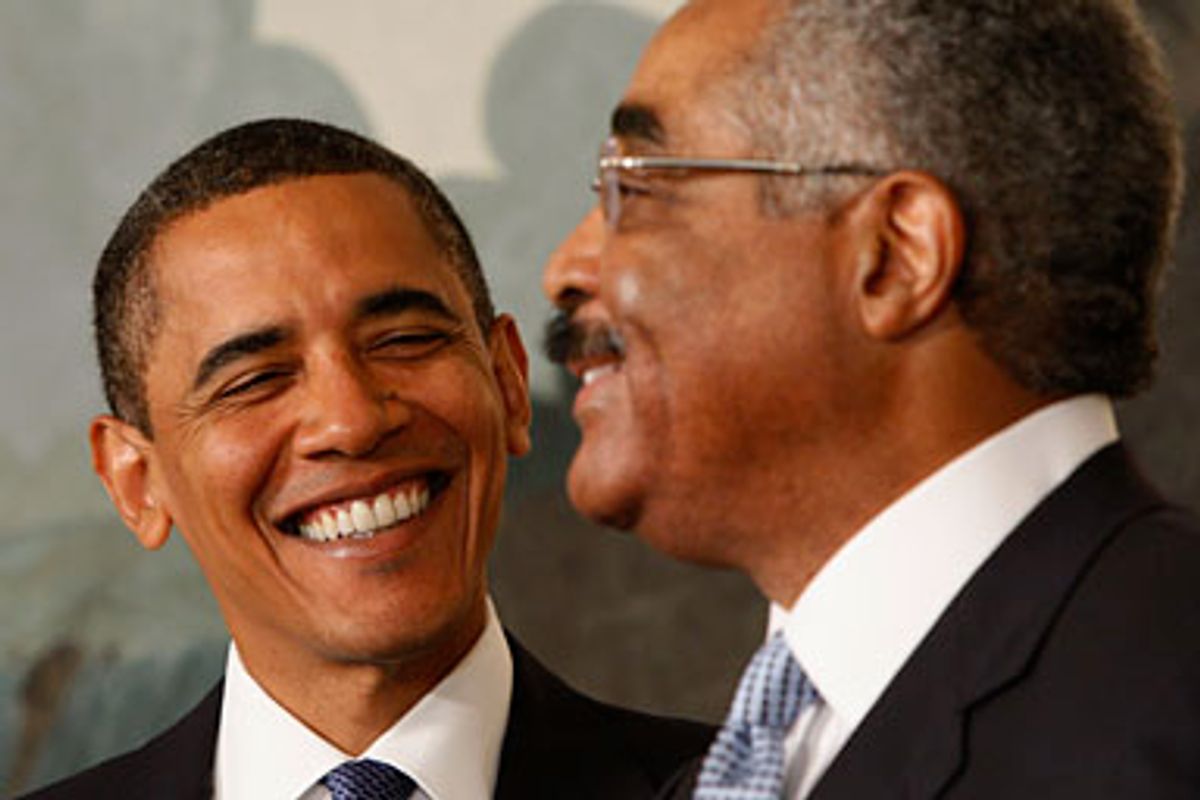 U.S. President Barack Obama (L) smiles as he is introduced to speak about the agreement to lower drug costs for seniors by Barry Rand, the CEO of AARP, in the Diplomatic Reception Room of the White House in Washington June 22, 2009.
--

Last week didn't bring much good news for the Obama administration's drive to overhaul healthcare. Congressional budget wonks announced the draft legislation the Senate was working on would cost more than anyone expected; the industry players the White House had worked hard to bring into the reform process started grumbling about the whole thing. By the weekend, conventional wisdom inside the Beltway had more or less already declared reform dead.

Which made Monday's announcement by President Obama that the lobbying arm for the nation's drug manufacturers had agreed to cut the costs of drugs for seniors by $80 billion over the next decade something of a confusing spectacle. If the chances for getting anything done on healthcare had dwindled away, what was the president doing bringing back his campaign slogans -- and, more confusingly still, smiling confidently?

"To those who, here in Washington, who've grown accustomed to 'sky is falling' prognoses and the certainties that we cannot get this done, I have to repeat -- revive an old saying we had from the campaign: Yes, we can," Obama said. "We are going to get this done."

So the deepest significance of the deal between the government and PhRMA, the drug lobby, may well have been what it meant politically. Yes, the announcement means Medicare patients will no longer have to deal with an odd "doughnut hole" in their drug coverage; before Monday, the government pays for seniors' prescriptions if their annual cost is under $2,700 or more than $6,100, but not if the price is in between. But more important, the news gave the administration a public relations victory -- the president just saved the government, and seniors, $80 billion -- to kick off a week where Obama plans to play offense, not defense, on healthcare. On Tuesday, the president will hold a midday news conference, where he'll have a chance to pitch his plans, and on Wednesday, the White House will host ABC News all day, culminating in a live, prime-time town hall on health reform.

"There was this feeding frenzy last week," one administration official admitted. But White House aides -- who like to insist that they're not paying attention to day-by-day news cycle battles, even as they manage events carefully to fit them -- aren't close to panicking yet. "There will be lots of developments every day about little provisions, and ultimately [very little of it] matters until you get a final bill."

Obama certainly didn't seem ruffled on Monday. He repeated the administration's main theme about healthcare -- you may like the coverage you have, but if the current system isn't changed, you won't be able to afford it for much longer. "Our goal -- our imperative -- is to reduce the punishing inflation in healthcare costs while improving patient care," Obama said. "And to do that we're going to have to work together to root out waste and inefficiencies that may pad the bottom line of the insurance industry, but add nothing to the health of our nation."

Among healthcare policy experts, that's become common knowledge, but the administration isn't finding it as easy to sell to the rest of the country -- or even to Congress. Obama has taken to quoting liberally from a New Yorker article about healthcare cost disparities in two neighboring Texas cities; administration officials have realized the story lays out their case pretty well. What's tricky about pitching the reform plan is that surveys show most voters actually like the care they have. In the last two weeks, Democratic and Republican pollsters have both reported fairly broad satisfaction with existing healthcare options. Obama's challenge is to convince people the system will soon gobble up an unsustainable share of the budget -- both on the federal level and where their own paychecks are concerned -- unless it's changed.

That task won't be easy, but advocates say it's certainly still possible. "People need to put aside the instant gratification bug and appreciate that it's going to take a while to get through the details," said Jackie Schechner, a spokeswoman for Healthcare for America Now, a union-backed group pushing for reform. Even the price tag doesn't have to scare voters off. "They say it's expensive to fix it, and then somebody gets their next insurance bill." Republicans, though, plan to focus their rhetoric on how much the reforms would cost -- more than $1.6 trillion, according to the Congressional Budget Office, though that number is likely to change once the legislation is finished.

Meanwhile, the aspect of the reform that Congress is most upset about doesn't seem to be particularly controversial with actual voters: including a government-funded insurance option to compete with private plans. A CBS News/New York Times poll found 72 percent of respondents liked the idea. "Free puppies and ice cream isn't as popular as that," the administration official joked. Even Republicans had to acknowledge that the public seems less than terrified. "Indeed, 'government bureaucrats' are scarcely less appealing than 'insurance bureaucrats," a GOP polling memo by Whit Ayres and Ed Gillespie reported on Monday. By the end of this week, the pundits may start declaring healthcare reform is as good as done. Last week's panic was probably premature. This week's celebration will be, too.