Oscars to double down on best-picture nods

In a return to glorious Hollywood tradition (i.e., ass-kissing), the Oscars will feature 10 nominated films 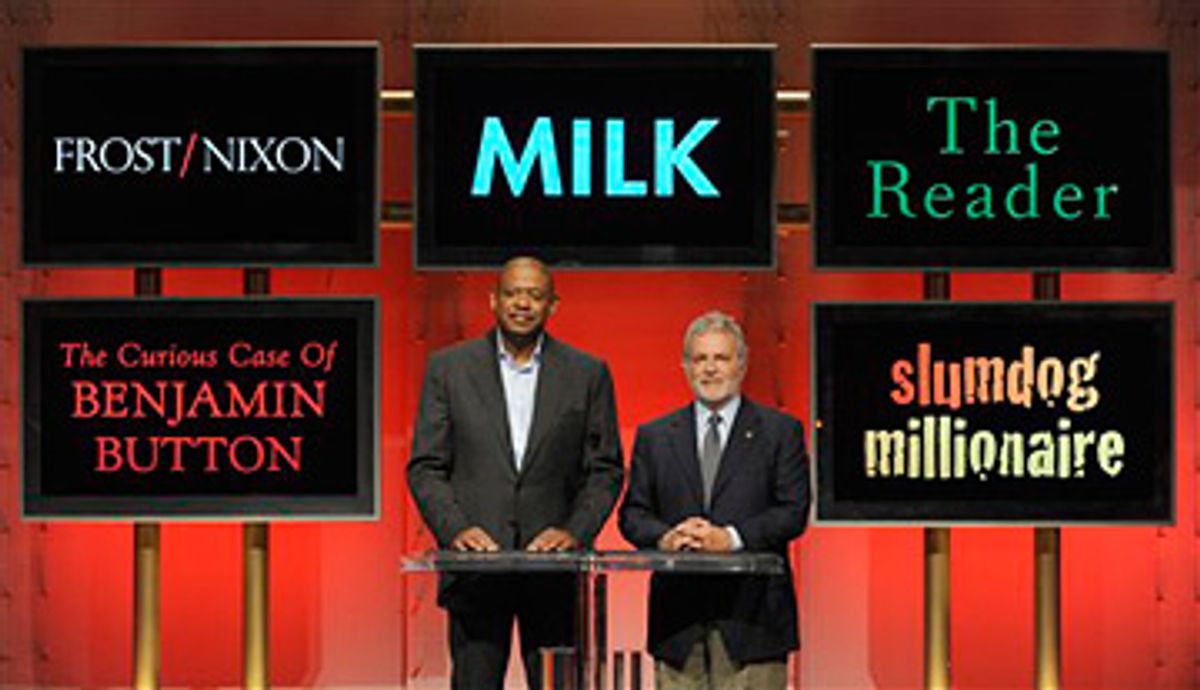 In a turn of events that's been a long time brewing, one imagines, the Academy of Motion Picture Arts and Sciences  announced on Wednesday that the 2009 Oscar race will yield 10 best-picture nominees, rather than the long-standing quota of five. Academy president Sid Ganis was careful to describe this as a return to ancient Hollywood tradition, since -- as absolutely no one remembers -- there were 10 nominees a year from 1936 to 1943 (and an erratic number, ranging from 8 to 12, in the years before that).

Actually, the Hollywood tradition to which Ganis is reverting is the one about placating producers of big-budget projects that make plenty of dough but don't win awards. He might as well call those five extra slots the We're So Sorry About "The Dark Knight" Memorial Nominations. The near-total Academy brushoff of that bat-scale blockbuster this year brought long-simmering industry grumping about the Oscars to a head, with many Hollywood suits convinced that the awards had been permanently hijacked by mid-level Indiewood films that do well in coastal metropolitan regions but fail to pack 'em in at heartland multiplexes. ("Slumdog Millionaire" and "No Country for Old Men" being the paradigmatic examples.)

I quote herewith from the AMPAS press release: "'Having 10 best-picture nominees is going allow [sic] Academy voters to recognize and include some of the fantastic movies that often show up in the other Oscar categories, but have been squeezed out of the race for the top prize,' commented Ganis. 'I can’t wait to see what that list of 10 looks like when the nominees are announced in February.'"

Well, me neither, Sid! Twitterers are already competing to come up with the most ludicrous potential 2009 nominees; "So 'Hotel for Dogs' has a chance!" someone chirped moments after the announcement was made. Indeed it does, and so does the forthcoming Kelsey Grammer-Bebe Neuwirth remake of "Fame," which I dread more than any other motion picture in history. But aren't we just likely to see more nods for quasi-quirky projects involving Diablo Cody and/or Steven Soderbergh? What say ye, Salon readers? Nominations, please.