They want to keep us indoors, and quiet. But which subversive programmer picked "The Lord of the Rings"? 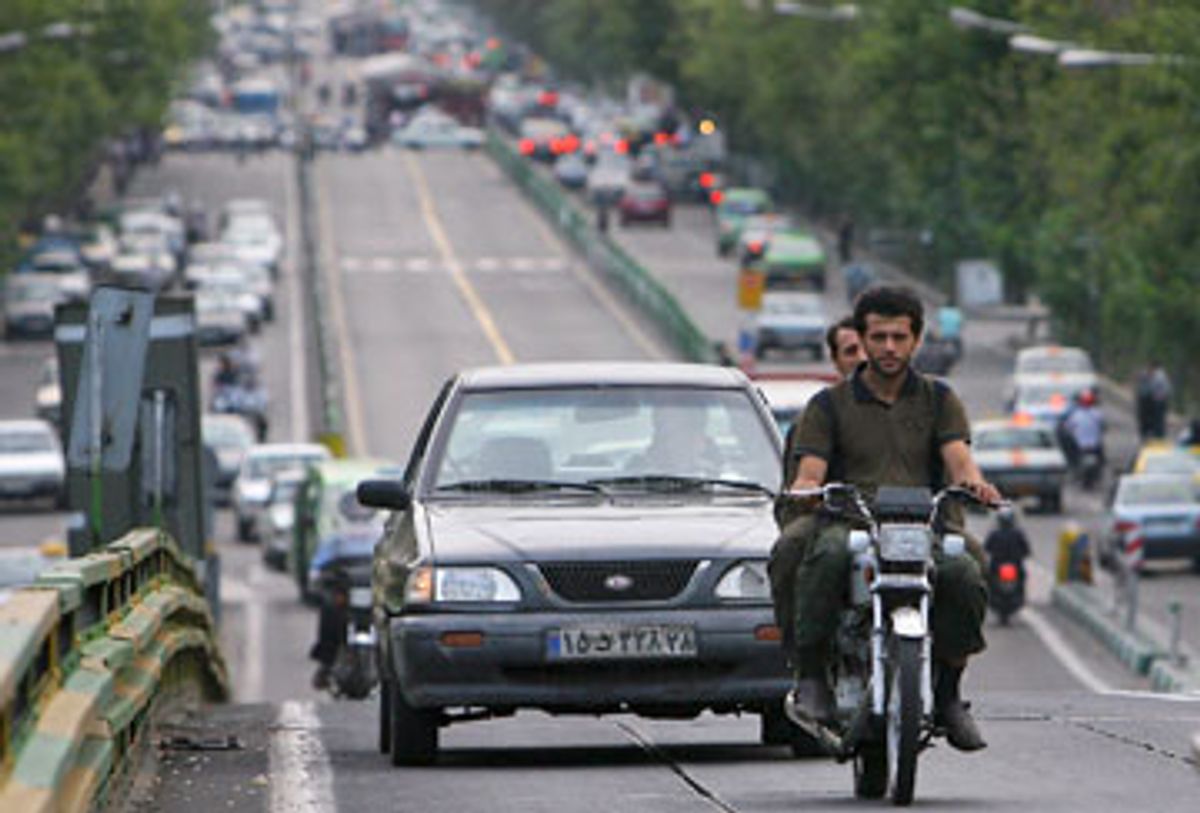 In Tehran, state television's Channel Two is putting on a "Lord of the Rings" marathon, part of a bigger push to keep us busy. Movie mad and immunized from international copyright laws, Iranians are normally treated to one or two Hollywood or European movie nights a week. Now it's two or three films a day. The message is "Don't Worry, Be Happy." Let's watch, forget about what's happened, never mind. Stop dwelling in the past. Look ahead.

Frodo: "I wish the ring had never come to me. I wish that none of this had happened."

Gandalf: "So do all who live to see such times, but that is not for them to decide. All we have to decide is what to do with the time that is given us."

On the news, it's more of the same. The state-run media is trying to tell us that life needs to go on, that politics is a nasty business, but now it's over. Except for that first night, the news broadcasts have not shied away from the violence outside. Instead they've found a way to turn it inside out, make it about the protesters and not the curious mathematics of the election. At least nothing is hidden or subtle. When they want to make a point they lay it on, 10 minutes at a time, sometimes close to 15. It's like a friend says -- this is not news, it's interpretation, spin.

They interview regular folk on the street and in the parks. They want viewers to know that all those millions of protesters are, somehow, not regular folk: "Khastekonande." It's getting old. "Kasebam. Barayenke moafaq basham bayad moid e am dashte bashe." I'm a businessman. For my business to succeed, I need for there to be calm. "Ma faghat mikhaim ye nooni darbiarim, dombal e kar e zendegi berim." We just wanna make some bread, take care of our lives and our business. "In ha kay shooloogh mikonand mardoom nistand. Man fekr nemikonam kay mardoom hastand." The ones who are rioting aren't of the people. I don't think that they're part of the people. "Chand rooze ke natoonestam pesar va dokhtaram biaram park bekhatere in shoolooghia." It's been several days that I haven't been able to bring my son and daughter to the park, because of the violence.

Back to "Lord of the Rings." Gandalf the Gray returns to the Fellowship as Gandalf the White. He casts a blinding white light, and his face is hidden behind a halo. "Imam zaman e?!" someone in the room asks. Is it the Mahdi, the last imam and, according to Shia Islam, the savior of mankind?

Who picked this film? I start to suspect that there is a subversive soul manning the controls at Seda va Sima, AKA the Islamic Republic of Iran Broadcasting. It is way too easy to play with the film, to draw comparisons to what is happening in real life. There are the overt Mousavi themes: the unwanted quest and the risking of life in pursuit of an unanticipated destiny. Then there is the sly nod to Ahmadinejad. Iranian films are dubbed (forget the wretched dubbing into English in the U.S.; in Iran dubbing is a craft) and there are plenty of references to "kootoole," little person, the Farsi word used in the movie for hobbit and dwarf. "Kootoole," of course, was, is, the term used in many of the chants out on the street against President Ahmadinejad. He is the "little person." ("And whose side are you on?" Pippin asks the ancient, forest-dwelling giant named Treebeard. Those watching might think the answer is Mousavi, since Treebeard is decked out in green.)

The 9-year-old in the room loudly predicts that the "Lord of the Rings" marathon will put an end to the nightly shouts of "Allah Akbar" from Tehran's rooftops. People will not take to the roofs and windows because these films will keep them occupied. Besides, there is a dubious rumor going around that the basij are marking the doorways of those households that continue to call out "Allah Akbar!" at night, a kind of reverse Passover. Fear, as well as Tolkien, will no doubt play a part.

Back to the movie. Gandalf's white steed strides into the frame. It is instantly transformed by local viewers into Rostam's mythical horse, Rakhsh. Rostam, the great dragon-slaying champion of Ferdowsi's poetic epic "Shahnameh," which recounts the whole history of Iran.

The 9-year-old is wrong about the rooftops. The sound begins as a low roll from a nearby park then quickly builds upward. "Allah Akbar! Allah Akbar!" No way. We rush to the window. It begins at 10 at night and will continue for another 30 minutes ...

On the television screen, Boromir, human of Aragon, falls. He dies an honorable death defending the lives of his compatriots.

"In edame dare." This is to be continued. The phrase has become our hesitant slogan, our phrase of reassurance. "In edame dare." People are not going to let up so easily.

Each time I've lost faith, I've been wrong. Iranians are proving to be a sturdier lot than I have given them credit, much mightier even than the formidable kootooloos that stand in their way.