A right-wing writer on how to be a real man

The mentality behind our wars and related policies is as grotesque and twisted as ever. 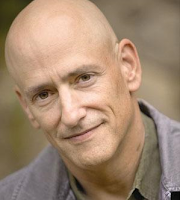 Andrew Klavan is a right-wing writer who, according to his Wikipedia page, specializes in "tough-guy" novels; writes for "Pajamas Media"; and believes George Bush is similar to Dark Knight's Batman because both "understand that there is no moral equivalence" between our society and the Evil Ones and that the Evil Ones "must be hounded to the gates of Hell."  When Klavan demands that the Terrorists "be hounded to the gates of Hell," he means that he wants other men and women to do the hounding, as Klavan, born in 1954, has never served in the military.

Today, this super-tough guy has a column at Pajamas Media explaining -- in the context of a new film he saw that joyously depicts men as men and ladies as ladies -- what distinguishes real men like him from fake males who have had their manhood taken by women:

A lot of critics get all huffy about this depiction of the sexes - read the silly little fellow who wrote the review in the New York Times by way of example. The standard line seems to be to blame it all on childish filmmakers pandering to adolescent audiences. But you know what? I suspect a lot of it is simple realism. More and more often I meet young guys just like this: overgrown kids who are their grim wives’ poodles. They sheepishly talk about getting a “pink pass,” or a “kitchen pass,” before they can leave the house. They can’t do this or that because their wives don’t like it. They “share” household and child-rearing tasks equally - which isn’t really equal at all because they don’t care about a clean house or a well-reared child anywhere near as much as their wives do. In short, each one seems set to spend his life taking orders from a perpetually dissatisfied Mrs. who sounds to me - forgive me but just speaking in all honesty - like a bloody shrike. Who can blame these poor shnooks if they go out and get drunk or laid or just plain divorced?

I’m the old-fashioned King of the Castle type: my wife knew it when she married me, she knows it now, and she knows where the door is if she gets sick of it. And you can curse me or consign me to Feminist Hell or whatever you want to do. But when you’re done, answer me this: why would a man get married under any other circumstances? I’m serious. What’s in it for him? I mean, marriage is a large sacrifice for a man. He gives up his right to sleep with a variety of partners, which is as basic an urge in men as having children is in women. He takes on responsibilities which will probably curtail both his work and his social life. If he doesn’t also acquire authority, gravitas, respect and, yes, mastery over his own home, what does he get? Companionship? Hey, stay single, dude, you’ll have a lot more money, and then you can buy companionship.

All right, I know, I’m a mean old man. But I’ve also been blissfully married for 30 years to a woman who wakes up singing. I think some of these young guys have been sold a bill of goods, I really do. I think they’ve been told what they’re supposed to be like and have sacrificed what they are like. Maybe their marriages are more “fair” than mine but just looking at them, I think they’re miserable. And I suspect, deep down, their wives are probably miserable too.

If you ask me, they’d be better off staying in Vegas.

I wonder what he thinks of the women who go and fight the wars for which he's a vocal (shrieking) tough-guy cheerleader but won't fight himself?  Ultimately, the only cure for this level of insecurity over one's masculinity is to become a cheerleader for wars, torture, "getting tough" with our current Enemy (today: Iran), and politicians who prance around in fighter pilot costumes on the decks of aircraft carriers.  The vicarious sensations of pulsating strength must be so soothing to someone like this, so desperate to prove their manhood.  As Digby wrote in what I consider to be a seminal post on this topic, this has been true forever, was as pronounced during the Vietnam War as it is now:  it's impossible to overstate the role this sad Rush-Limbaugh/Dick-Cheney mentality plays in the craving of people like this, from a safe distance, for wars and destruction fought in their names, by others.  They get to revere a President who's just like Batman, and it makes them real "old-fashioned King of the Castle types."