The strange nakedness of Mark Sanford

He was an emotional wreck at his press conference, but also something philandering politicians rarely are: Human 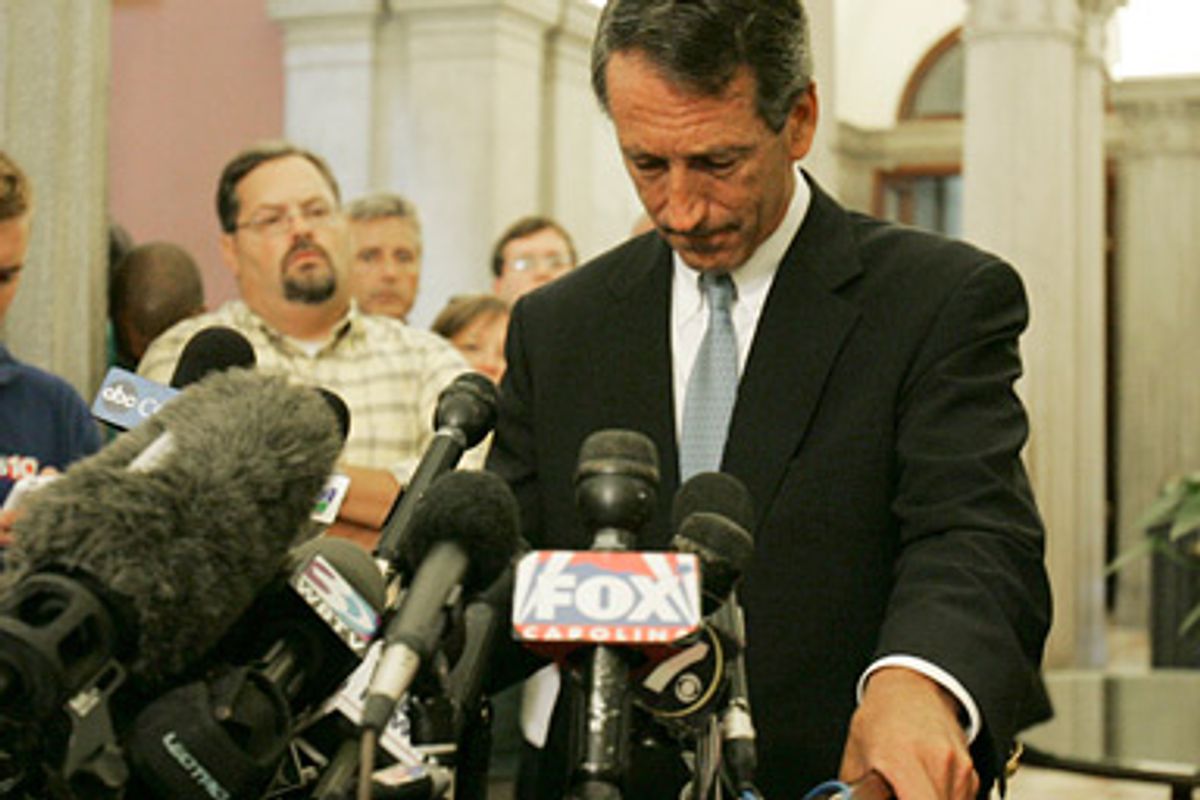 South Carolina Gov. Mark Sanford wipes his tears as he admitted to having an affair during a news conference in Columbia, S.C Wednesday, June 24, 2009, and said he is resigning as chairman of the Republican Governors Association.
--

When South Carolina Gov. Mark Sanford told the world he had been having an extramarital affair, I didn't expect to feel any sympathy for him. The ritual in which a married, male politician appears in front of the cameras, confesses to having an affair, and asks his family, friends, constituents and God for forgiveness has become so familiar and formulaic that it usually feels like the sinner is reading from a teleprompter. I let my wife and kids down -- check. I let myself down -- check. I broke God's law -- check. The whole thing is a shtick, a plastic act of absolution performed by men who are just as plastic. Its banality, its creepy decorum, belittles everyone associated with it. There is no grand, destructive passion, no fire, no chaos. There are no Anna Kareninas, only their soulless husbands.

Moreover, I was hardly predisposed to cut Sanford any slack. From Bob Livingston to Newt Gingrich, the hypocrisy of sanctimonious, Bible-thumping, family-values-espousing GOP politicians who get caught with their pants down has become a national joke. Until Republicans abandon their judgmental moralism about all things sexual, their marital peccadilloes will inspire schadenfreude, not sympathy.

But something strange happened during Sanford's confession. He broke the formula. He got lost. He went too deep. He exposed his soul. He got all weird and human on us. His life had become an awful train wreck happening in front of the whole country, and it didn't seem like he had any idea of how it was going to end up and he didn't care who knew it. Instead of a press conference, we had been carried into some Eternal Bedroom of Misery that most of us have been in at one time or another, that room where marriages and love affairs -- all alike, all different -- come to a painful end. Surreal, jagged emotional shards flew through the air. "I spent the last five days of my life crying in Argentina." "I'm committed to trying to get my heart right." "The odyssey that we're all on in life is with regard to the heart." Sanford used some of the familiar rhetoric, speaking of God's law and asking for forgiveness, but this was not another blow-dried, prefab confession. It was unscripted. It was so intimate it was almost unwatchable.

Politicians, in particular Republicans from the South, are not known for psychological introspection. But Sanford talked like one of the id-excavating characters from "Six Feet Under." He sounded like a man who's been digging so deeply through his soul, was so wounded, so beyond quotidian concerns, that he didn't care anymore what anyone thought. He was following his own compass. Maybe that explains his almost unprecedented willingness to talk not just about his wife and their children, but his lover. He talked about how their "remarkable friendship" of eight years started, ironically, when she was separated from her husband and he tried to convince her to stay with him for the sake of their children. He recounted that a year ago, their friendship sparked into something "much more" -- not just "more," but "much more."

Unprompted, he talked of the period of time after they first became lovers as "that whole sparking thing," and went on to say that after they were discovered five months ago, they "went into overdrive trying to figure out where do you go from here." He said that during this agonizing, life-upside-down time, the one thing he absolutely wanted was "resolution." And he said that "While indeed from a heart level there was something real" between him and his lover, because of his wife, children, and where he and his lover were in their lives, they decided "it was a place that I couldn't go and she couldn't go."

These are not the kinds of thing that public figures who have been caught having affairs say. They go far beyond the necessary, the conventional, the tasteful. But as e-mails between Sanford and his lover show, this does not appear to have been a casual fling. This was not conventional or tasteful. This was a love affair. (When was the last time a public figure got caught in a love affair? It's always bimbo eruptions and high-priced hookers.) And Sanford was strung out. His wife separated from him two weeks ago, as a trial to strengthen their marriage, and he promptly headed to his purgatory in Argentina. He was obviously still burned by that fire. He looked and sounded like a man who has just been taken by Eros on a guided tour of heaven and hell -- mostly the latter.

I'm neither defending nor condemning Sanford -- such judgments, from outsiders, are meaningless. I know nothing whatsoever about Sanford, his wife or his lover. I also admit I might be wrong about him. He might simply be a good actor, who cynically donned a devastated mask to win sympathy. But I don't think so. Whatever happens to Sanford politically will happen, and it won't be pretty. He knew the rules of the game, he broke them and now he has to pay the price. But that press conference was about something much deeper than politics. It was awful, but it was real. And painful as it is, in the repressed American sexual landscape, reality is better than artifice. For the real enemy is not sin. The real enemy is plastic.