Born to stardom, he never knew what it was like to live or even behave normally 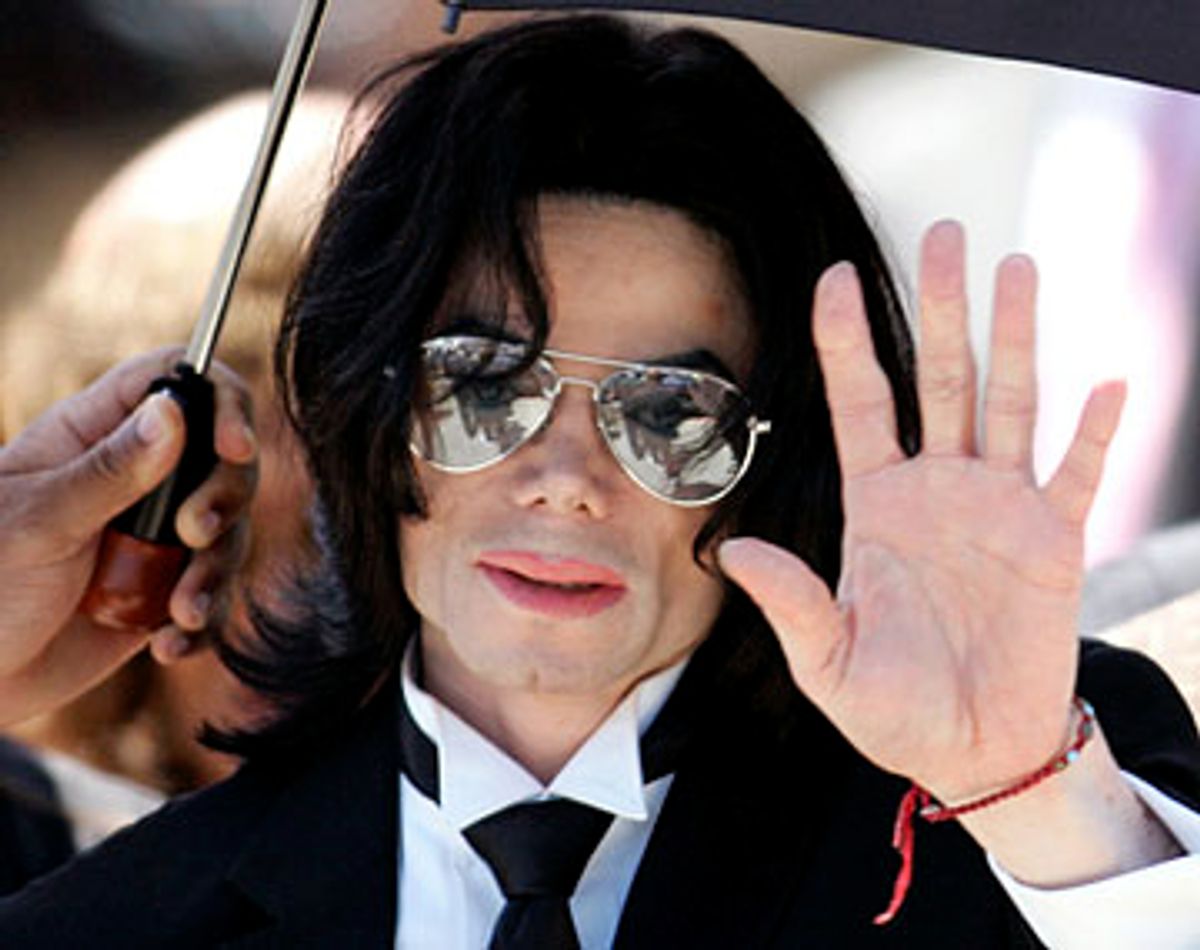 CNN's coverage of Michael Jackson's sudden illness in the minutes before his death was reported captured nicely the way the media has treated him. Nutty people were allowed to talk at length, including a guy who kept saying his concerts in London were in 2010. (They were scheduled for next month.)

Wolf Blitzer looked into the camera to tell us earnestly that the head of the concert promotion company had told them that Jackson was in "tip-top shape," and that he'd passed a health exam "with flying colors."

Funny how an impossibly pampered 50-year-old guy in top-top shape could just keel over dead.

We're supposed to live in an Age of Paparazzi. Isn't it curious how stars nonetheless manage to die right before our eyes?

They do it with our complicity.

Born not just to celebrity but to stardom, Michael Jackson never knew what it was like to live normally, or even behave normally. He was drafted into the family's musical act, the Jackson 5, while in elementary school, and taken to Motown records. He was taught how to live a manufactured image at the feet of Berry Gordy, who was quite good at such legerdemain.

If you're 9 years old and born to be a star, such training will definitely turbocharge the marketing of your record sales; as for the fact that almost all the money from those sales went to your teacher and not you ... well, that was his second lesson.

Trust, truth ... these were concepts Michael Jackson learned early on didn't have much worth. But of course he had his family, right?

His angry father beat him and his eight siblings with some determination, reputable biographers have told us. (Untrustworthy La Toya said that she and Michael were sexually molested, too.) On tour at age 10, Michael tried to sleep as his older brothers banged groupies in the motel rooms they shared. Then all the kids watched in wonder as their father took up with another woman and had a child with her.

Love, marriage, sex ... Michael Jackson learned early that those didn't mean much either. The Jackson 5 had a three-year run, not bad for a kid act. When the family, which realized it hadn't made any money, left the label, a vengeful Gordy exacted as a price not just a brother --  Jermaine, who, married to Gordy's daughter, stayed at Motown -- but even their name. When they moved to Columbia, they couldn't use the name the Jackson 5.

In five years he collected himself, extracted himself from his father's control and recorded two albums that would change the music industry. The best was the first: 1979's "Off the Wall," a groovy, irresistible stunner. Blithe and implacable, sparkling and protean, it displayed a lean  talent, feline in his sexuality and relaxed in his blackness. The round-faced, broad-nosed charmer looking out from the album's cover reeked not just of charm but confidence and, for the last time, normality.

Three years later, "Thriller" would take what became an epochal step forward in terms of commerciality. Viewed now, with the benefit of hindsight, we can see Jackson's evolving physiognomy is symptomatic of an insecurity we didn't think to question at the time.

His celebrity's toll on his own and his family's life became considerable. For some unaccountable reason, after "Thriller" he still lived at home, as his family busied itself with intrigues and cockamamie plans. One imagines him sitting in his room ignoring the knocks at his door as offers of millions came in to the family from across the country and around the world to do just about anything -- anything, that is, that Michael would do too.

With the exception of Janet, his youngest sister, who somehow managed to extract herself and create her own extraordinary career, virtually every member of his family managed to blemish their reputations; among other things, more than one of the boys, their father's sons, were charged with beating up their girlfriends or wives.

The story from that point is a bleak and unrelieved one. Superficial things: Michael's ludicrous trappings and entourages; the fetishization of the armed militias marching around in his videos; tales of his supposed bizarre doings leaked to tabloids; the grasping grandiosity of his public appearances. Jackson had a flair for exploiting the tabloid celebrity he had, but that was a skill he shared with Anna Nicole Smith and Paris Hilton, and it probably shouldn't be listed among his unique abilities.

Even more serious things: an entirely transfigured physical appearance, morphing from an engaging and handsome African-American man into a misshapen Eurasian woman; his skin bleached, his face resculpted; his nose, finally, needing to be practically taped onto his face. He left his race behind and, in a sense, his family too. (The nose, which seemed to have borne the brunt of his obsession with plastic surgery, was his father's.)

The master of crossover had seemingly crossed over for good.

And finally, a black moral hole, and a descent into a double life as a sexual predator. You've heard about not taking candy from a stranger; Jackson's candy took the form of literal amusement parks. There were nights of fun and sleepovers and inappropriate touching and ...

Accusations were leveled many times; most cases were settled; one case, gone to trial, ended in an acquittal in Santa Maria in 2005.

In the obituaries, writers will savor Jackson's talents, which were unquestioned; his ambition, which was otherworldly and a thing of awe; and his heyday, which lasted really just a few years, and encompassed perhaps two and a half albums. Others will reflect on the tragedies visited upon him and those he visited on others.

I think it's fair to classify Kurt Cobain's death as one brought on by medical problems, specifically the roiling interaction of depression and addiction. Jackson's death is in this sense more purely a suicide, just as Elvis Presley's was some three decades ago. Like Presley, Jackson at some point stepped through a door, closed it, and turned the key. What went on behind the door we'll never know.