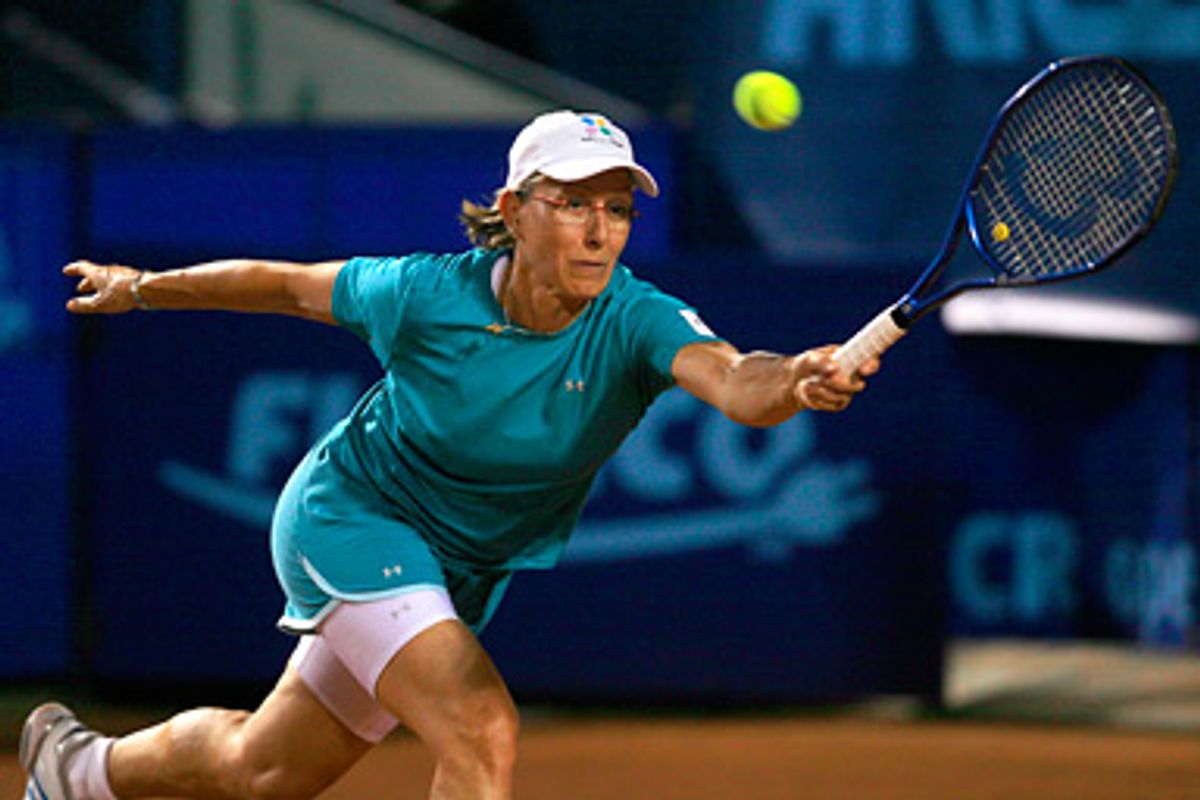 Tennis great Martina Navratilova of the U.S. returns a shot to Monica Seles during their demonstrative match at the BCR Open Romania tennis tournament in Bucharest September 16, 2007.
--

A famous multimillionaire athlete falls in love. He invites his new girlfriend to live and travel with him; he registers hundreds of thousands of dollars worth of property and assets in her name; he lavishes her with gifts, assures her of his undying love and even goes so far as to marry her in a private ceremony. Eight years later, the athlete has cast his wife out of his life, denied her every financial claim and left her with little more than the clothes on her back.

Here’s a question. Would any court in the land deny this wife restitution? And in the court of public opinion, would anyone take the side of a husband so stingy and unfeeling?

Let us now switch the husband’s gender. He is now a she: a lesbian tennis star willing to use the legal system to extract herself from another unhappy relationship. This makes the case more complicated, to be sure, but it does nothing to alter the injustice. And, if anything, the outrage should be greater.

In the past week, Martina Navratilova has been sued by a former lover, Toni Layton, who claims she was unceremoniously dumped and is now owed millions of dollars in damages and spousal support. Layton claims she and Navratilova had agreed “to evenly share all funds and assets earned and obtained by either while together.” These assets apparently include four multimillion-dollar homes.

By now, the suing of athletes by ex-lovers has become a staple of tort law, but unlike Roberto Alomar or Michael Jordan or Chris Bosh, Navratilova is able -- and has been willing-- to take advantage of a legal double standard that is both sexist and homophobic. And the gay community should be first in line to oppose it.

I say this with some regret because I have enormous admiration for Navratilova. She is one of the two or three greatest women ever to play the game of tennis. She has transformed society’s understanding of athleticism. And she has been candid and unapologetic about her sexuality at a time when most gay athletes, male and female alike, still have to be dragged from the closet.

But her current legal troubles remind us that even gay icons have some growing up to do when it comes to gay relationships. We cannot know whether all the assertions in Toni Layton’s lawsuit are true. We can say, however, with some certainty that the two women lived together as a couple, that they celebrated their relationship in a ceremony in New Hampshire, that they shared property and assets, and that Navratilova is much the wealthier of the two. If this were a no-fault heterosexual divorce, the law would unequivocally side with Layton, awarding her alimony and some division of property.

But the law, of course, still has different standards for same-sex relationships, and Layton has been forced to file a "domestic partnership" lawsuit in the deeply inhospitable legal climate of Florida, which has traditionally taken a dim view of alternative lifestyles. Barring a settlement, then, Navratilova stands to emerge from her most recent long-term relationship with little more than bad press and some whopping legal fees. If, that is, she can convince a court that her relationship with Layton doesn't rise to the contractual level of heterosexual marriage.

This stratagem is not new to her. In 1991, Navratilova’s ex-lover Judy Nelson sued her for $7.5 million in spousal benefits -- or, as the slavering tabloids used to call it, "galimony." To buttress her case, Nelson argued that the two women had engaged in not one but two marriage ceremonies and had filmed a video will together.

Nelson also got vocal support from another Martina ex, Rita Mae Brown. In her memoir, "Rita Will," Brown writes that her sympathies shifted toward Nelson during a pretrial hearing in which Navratilova's lawyers argued (Brown's words) that "Martina and Judy had had a contract for sex," which "amounted to prostitution and therefore was against public policy." By demoting same-sex relationships to the level of a roll in the hay, Brown argued, Navratilova "could inflict colossal damage on every gay person in the United States."

Brown's motives in entering the case were suspect -- she had famously shot out the back window of Navratilova's BMW after a quarrel, and she herself enjoyed a brief liaison with Nelson -- but politically she was on target. The only way Navratilova could escape her financial (not to mention moral) obligations was to argue that her gay relationship did not carry the same legal standing as a straight relationship.

What was cynical then has become indefensible now. Martina Navratilova can no longer cast herself as an apostle for gay rights while using a homophobic legal code to deny her ex-partners alimony. This is more than bad behavior, it is bad precedent. And it comes at the worst possible time.

Very soon -- sooner than anyone could have guessed -- gay marriage will become the law in much of the land. A great deal has been written about whether straight America is ready; less has been written about whether gay America is ready. Not just to be held to the same contractual standards as heterosexual couples but to believe (after years of being told otherwise) that their relationships really are of equal standing. And to go on believing it when those relationships collapse.

In reporting on Toni Layton’s lawsuit, Britain’s Daily Mail used the following headline: "Martina Sued for Millions by 'Wife.'" I hope and expect that those archly condescending quotation marks will one day disappear, but it is the job of the gay community to make them go. If we want our relationships to be taken seriously, if we want the legal sanction of marriage, we must be ready to stand by our contracts and our obligations -- no matter how expensive or inconvenient it is and no matter what example is set by our culturally designated "heroes." Equality has its blessings. It also has its price.