Disco dancin' with the dictator

And also killing people. The Pinochet-era ultra-dark comedy "Tony Manero" is the feel-bad movie of the year 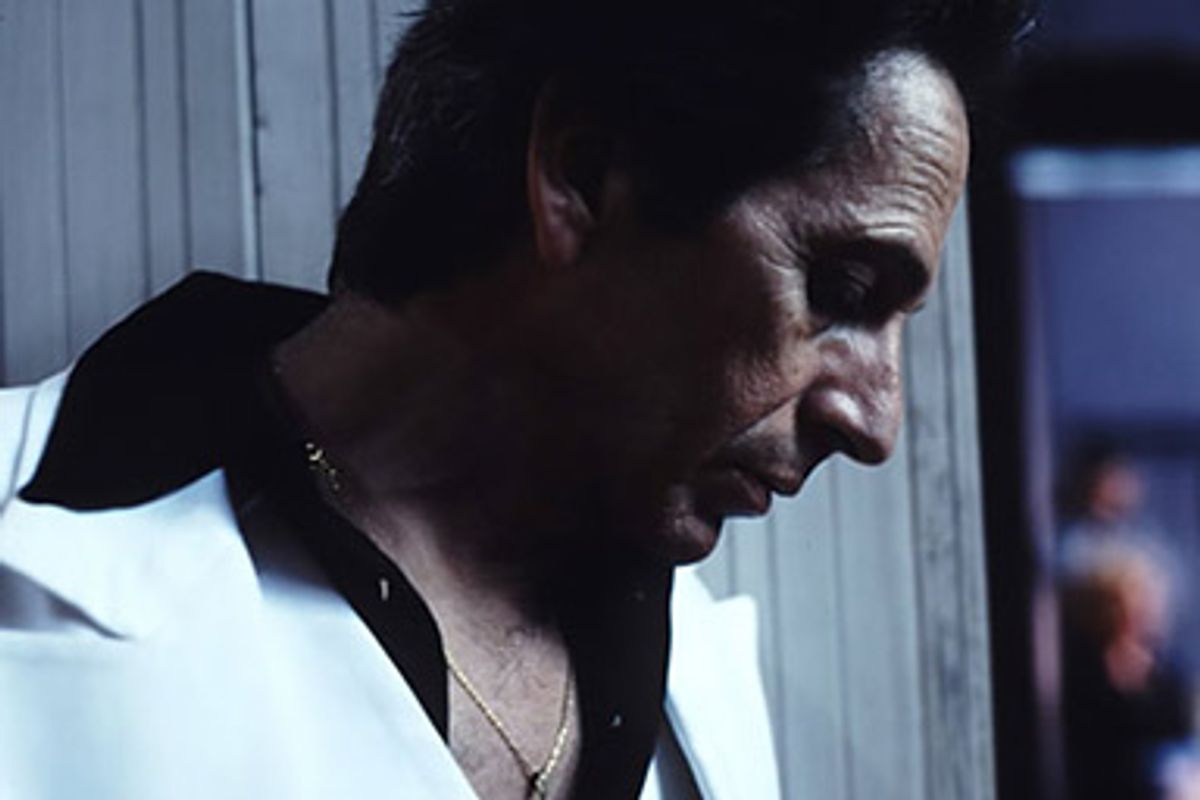 "Tony Manero" is one of those movies that sneak up on you from behind and take a pickax to your head. Arguably I shouldn't be writing about it at all, except to say that if you dig the terrain where dark comedy, horror movie and political allegory mix, and if you appreciate having your mind well and truly messed with, you should check it out.

There's no question that "Tony Manero" has maximum impact if you don't know what you're in for. You might say that Pablo Larraín, the film's 32-year-old Chilean director, is preying on false expectations. After the movie's premiere at Cannes last year, one studio executive told me that several of her colleagues had emerged from the screening violently angry. While Larraín presumably did not make the film just to piss off a bunch of rich Americans who might theoretically be interested in giving him money, it's nonetheless an accomplishment in which he can take pride. (He eventually found a United States distributor in Lorber Films, the latest creation of indie-industry veteran Richard Lorber.)

The movie's title and premise suggest a certain kind of film, one of those up-with-people sagas about how pop culture can save your life in difficult circumstances. Its protagonist, to stretch that term to its absolute limit, is a disheveled 52-year-old man named Raúl (played by veteran Chilean stage actor Alfredo Castro, who also co-wrote the script), whose life under the Pinochet dictatorship of the 1970s is dominated by his obsession with "Saturday Night Fever." Raúl goes to see the movie alone in empty theaters, mumbling along with the English dialogue he only half-understands. He is the "star" of an SNF-themed nightclub revue in a downtrodden bar on the fringes of Santiago, and dreams of being honored as the leading Tony Manero impersonator on an appalling Chilean variety show.

Unfortunately for Raúl, the first time he shows up to audition for the show, the other guys lined up don't look quite right. It's Chuck Norris night rather than Tony Manero night! This movie is often very funny, if you allow yourself to laugh at it. But then again, so is "The Shining." As you've already gathered, "Tony Manero" is not an up-with-people story. If Larraín and his writers have something to say about the relationship between the global impact of American pop culture and the grinding tyranny of late-'70s Chile, it isn't something positive. One can read all sorts of dark political allegories and observations about human nature into this movie, but thankfully all that is left up to the viewer.

In Castro's phenomenal performance, the corpse-gray Raúl has a dispassionate, perfectionist demeanor, pushing his aging body into impressive if robotic imitations of John Travolta's dance-floor moves. (In one memorable scene, he rehearses his routine while wearing nothing but a pair of soiled undershorts.) It takes us a while to grasp that under his deadpan surface Raúl is a bottomless pit of sociopathic rage and desire, who cares about nothing and nobody beyond his self-appointed Manero mission.

Several of his nightclub partners are involved in the anti-Pinochet underground, and the dictator's secret police are closing in. Raúl barely notices, treating his supposed friends and the rest of human life with blind and vicious disregard. He's more like an abused Doberman than a human being. At this point I'm not giving much away in revealing that Raúl commits dreadful acts of violence (although the nastiest scene in the film involves no physical injury), but he lacks the intentionality and self-consciousness to be called a serial killer. He's just going to build that disco floor (out of discarded glass bricks and fluorescent strip lighting), God damn it, and if you get in his way, there's going to be trouble.

Shot on a low-budget on Super 16 mm film (and subsequently blown up to 35 mm), "Tony Manero" has a slightly dingy look that perfectly suits its oppressive '70s setting. It's not a picture likely to win awards for its cinematographic beauty, but I found it a memorably claustrophobic evocation of its time and place, as well as a reminder that the so-called escape offered by pop culture can sometimes be an escape into soul-sucking madness. Studio executives won't be the only people to hate "Tony Manero," but such hatred only makes the film, like its unforgettable "Stayin' Alive" antihero, that much stronger.

"Tony Manero" is now playing at the Cinema Village in New York, and opens July 17 at the Laemmle Music Hall in Los Angeles, Aug. 14 in Cleveland, Aug. 21 in Seattle, and Sept. 11 in Nashville, with more cities and DVD release to be announced.

Other stuff this week: "The Beaches of Agnès," an inspiring, unclassifiable memoir-on-film from prickly French New Wave legend Agnès Varda, now 81 years young, is now playing in New York and Los Angeles, with more cities to follow. Varda revisits her movies, her cities, her troubled but loving marriage to fellow filmmaker Jacques Demy, and the artistic-avatar career that has taken her around the world. Never before have Harrison Ford and avant-garde French documentarian Chris Marker (or at least his cartoon-cat stand-in) appeared in the same movie!

Speaking of prickly French women, fans of the always smart, always mean and grossly undervalued Anne Fontaine ("Dry Cleaning," "How I Killed My Father") won't want to miss "The Girl From Monaco," her biting, ambiguous sex farce about the affair between a middle-aged Parisian lawyer (the great Fabrice Luchini) and a supernally trashy Monaco weathergirl (newcomer Louise Bourgoin). Sometimes the satire seems obvious by Fontaine standards, but it still ranges from sunny and enjoyable moments to creepy and Hitchcockesque ones, with a tremendous supporting performance by Roschdy Zem as the lawyer's bodyguard. It's now playing in New York and Los Angeles, with a national rollout to follow.

Argentine director Pablo Trapero's absorbing crime-and-punishment drama "Lion's Den" is finally reaching American viewers, beginning with the IFC Center in New York. It stars Trapero's real-life wife, Martina Gusman, in a ferocious performance as a perpetually trashed young woman who goes to prison for a crime she can't remember committing, and has to give birth to her son behind bars. As I wrote last year from Cannes, it's marvelously shot and acted, constantly surprising, and completely focused on its heroine's struggle to get from one moment to the next. "Lion's Den" is not a thriller or a social-issue drama or a story of lesbian love in prison, although it has those elements in it. It's a story about a woman who is damaged, angry, beautiful and indomitable, who loves her son and who remains a mystery to us, and to herself, right to the end.