Techniques which the paper refuses to call "torture" when used by the U.S. magically transform when used by others.

Today is the ideal day to celebrate America's specialness, and America's paper of record inspirationally leads the ritual:

A LINGUISTIC shift took place in this newspaper as it reported the details of how the Central Intelligence Agency was allowed to strip Al Qaeda prisoners naked, bash them against walls, keep them awake for up to 11 straight days, sometimes with their arms chained to the ceiling, confine them in dark boxes and make them feel as if they were drowning.

Until this month, what the Bush administration called "enhanced" interrogation techniques were "harsh" techniques in the news pages of The Times. Increasingly, they are "brutal". . . . .

The word had appeared a few times before in this context, most recently on April 10, when the Central Intelligence Agency said it was closing the network of secret overseas prisons where interrogations took place. Scott Shane, who covers national security, said he and his editor in the Washington bureau, Douglas Jehl, negotiated over the wording of the first paragraph. Shane wrote that methods used in the prisons were "widely denounced as illegal torture." Jehl changed that to the "harshest interrogation methods" since the Sept. 11 attacks. Shane said he felt that with more information coming to light, including a leaked report by the International Committee of the Red Cross, the words harsh and even harshest no longer sufficed. He proposed brutal, and Jehl agreed. . . .

And why not, then, go all the way to torture?  Jehl said that when the paper is discussing what is generally regarded as the most extreme interrogation method the C.I.A. used, waterboarding, "we’ve become more explicit in saying in a first reference that it’s a near-drowning technique" that Obama, Attorney General Eric Holder and many other experts "have called torture." But he said: "I have resisted using torture without qualification or to describe all the techniques. Exactly what constitutes torture continues to be a matter of debate and hasn’t been resolved by a court. This president and this attorney general say waterboarding is torture, but the previous president and attorney general said it is not. On what basis should a newspaper render its own verdict, short of charges being filed or a legal judgment rendered?" Jehl argued for precision and caution. I agree. 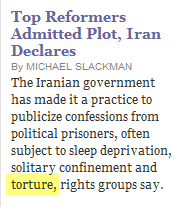 CAIRO -- Iranian leaders say they have obtained confessions from top reformist officials that they plotted to bring down the government with a "velvet" revolution. Such confessions, almost always extracted under duress, are part of an effort to recast the civil unrest set off by Iran’s disputed presidential election as a conspiracy orchestrated by foreign nations, human rights groups say. . . .

The government has made it a practice to publicize confessions from political prisoners held without charge or legal representation, often subjected to pressure tactics like sleep deprivation, solitary confinement and torture, according to human rights groups and former political prisoners. . . .

In 2001, Ali Afshari was arrested for his work as a student leader. He said he was held in solitary confinement for 335 days and resisted confessing for the first two months. But after two mock executions and a five-day stretch where his interrogators would not let him sleep, he said he eventually caved in.

"They tortured me, some beatings, sleep deprivation, insults, psychological torture, standing me for several hours in front of a wall, keeping me in solitary confinement for one year," Mr. Afshari said in an interview from his home in Washington. "They eventually broke my resistance."

Virtually every tactic which the article describes the Iranians as using has been used by the U.S. during the War on Terror, while several tactics authorized by Bush officials (waterboarding, placing detainees in coffin-like boxes, hypothermia) aren't among those the article claims are used by the Iranians.  Nonetheless, "torture" appears to be a perfectly fine term for The New York Times to use to describe what the Iranians do, but one that is explicitly banned to describe what the U.S. did.  Despite its claimed policy, the NYT has also recently demonstrated its eagerness to use the word "torture" to describe these same tactics . . . when used by the Chinese against an American detainee.

Notably, the NYT article today seems to take particular offense that the Iranian Government is putting people on trial using confessions they obtained via torture ("the government planned to put on trial several Iranian employees of the British Embassy — after confessions were extracted").  Just two days ago, The Washington Post reported:

The American Civil Liberties Union yesterday accused the Obama administration of using statements elicited through torture to justify the confinement of a detainee it represents at the U.S. military prison in Guantanamo Bay, Cuba.

The ACLU is asking a federal judge to throw out those statements and others made by Mohammed Jawad, an Afghan who may have been as young as 12 when he was captured. His attorney argued that Jawad was abused in U.S. custody, threatened and subjected to intense sleep deprivation.

Just read the details of what we did to this adolescent to marvel at what the NYT (and, of course, NPR) refuse to call "torture" when done by us.  Though the human rights abuses of the Iranian Government are well-documented and severe, there's also no mention in the NYT article of these interrogation tactics being applied by Iran to teenagers (such as Jawad) or resulting in numerous detainee deaths (as happened during the Bush era).

During the presidential campaign, Rudy Giuliani was widely ridiculed for arguing that whether these tactics are "torture" depends, at least in part, on who uses them (it's torture if They do it, but not when We do it).  But he could take that definitive moral relativism to any leading American newspaper, become an Editor, and fit right in, since that's exactly the editorial policy of our leading media outlets.  What's most striking about all this media behavior is that people around the world -- outside of the U.S.  -- aren't fooled by these sorts of blatant double standards, whereby the U.S. even claims the power to change the meaning of words based on whether it or another country is doing something.   The target of this government and media behavior is purely domestic.

It's not particularly unusual for a government to permit itself to do something that it prohibits others from doing.  The U.S. is hardly the only country that does that.  But when that country's media collectively abets that government effort by molding its language to reflect that exceptionalism, it elevates the propaganda to a much different level.  When I documented the American media's obsession with journalists detained by other countries and its virtually complete blackout of much, much longer (and often more oppressive) detentions of foreign journalists by the U.S., that was the central point I tried to emphasize:

Pointing to other governments and highlighting their oppressive behavior can be cathartic, fun and gratifying in a self-justifying sort of way. Ask Fred Hiatt; it's virtually all he ever does.  But the first duty of the American media -- like the first duty of American citizens -- is to oppose oppressive behavior by our own government.  That's not as fun or as easy, but it is far more important.  Moreover, obsessively complaining about the rights-abridging behavior of other countries while ignoring the same behavior from our own government is worse than a mere failure of duty.  It is propagandistic and deceitful, as it paints a misleading picture that it is other governments -- but not our own -- which engage in such conduct.

Since the American Government has acted -- and continues to act -- overtly to protect and shield those who engaged in this conduct, will it condemn Iran for torturing detainees? As for The New York Times, at this point, they don't even seem interested in pretending that they make these editorial judgments independently or with a pretense of objectivity.  They're perfectly happy to have you know that when the U.S. Government does X, it is called one thing, but when foreign governments do X, it is called something else entirely.

Musa Saidykhan had been a reporter in his home country of Gambia for more than a decade when he was arrested and later tortured by government officials. Following Saidykhan's imprisonment, he fled the country with his family and now lives in Grand Rapids, Michigan. Saidykhan explains how he will commemorate freedom on this, his first, Independence Day in the U.S.

All the impediments that prevent American media organizations from using the word "torture" certainly do evaporate quickly when it comes to other countries.