Science fiction with a smile

Mysteries and magic unfold on the renamed Syfy network, from the funny "Warehouse 13" to the charming "Eureka" 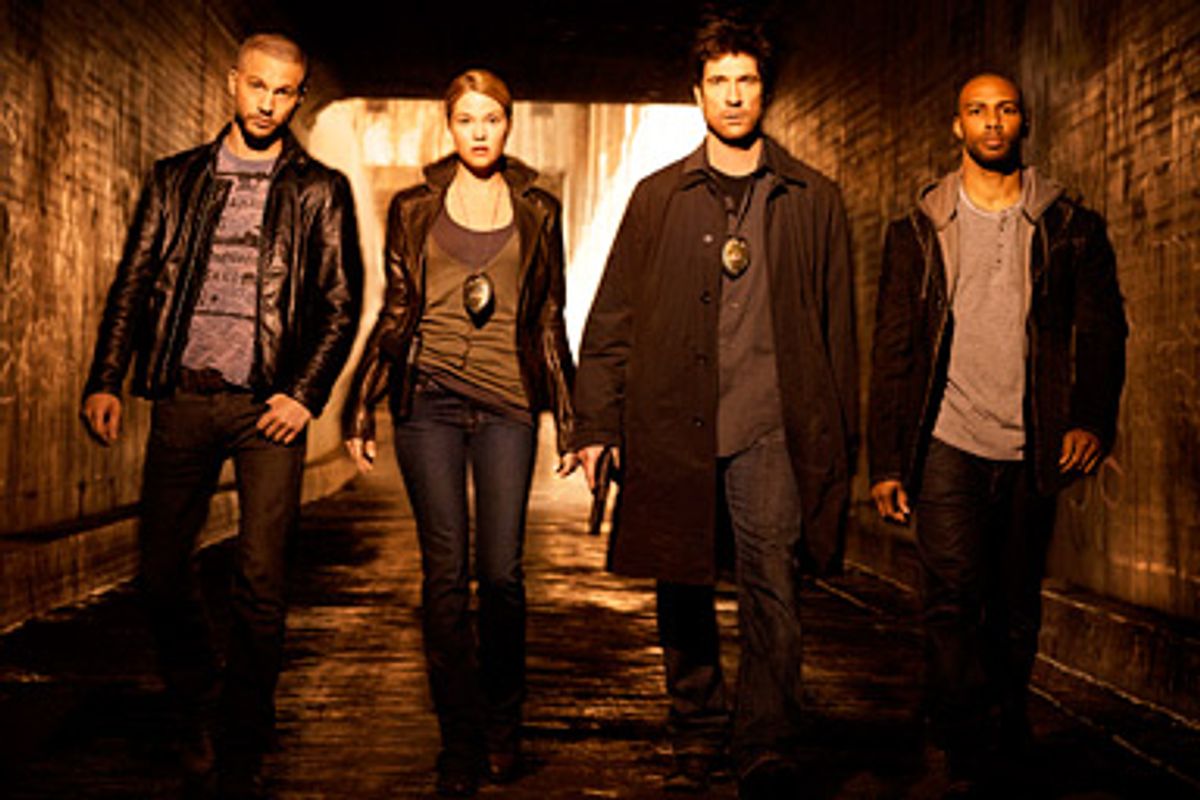 Not only is trying to keep your personal life private nearly impossible, but the whole concept of being a "private person" is patently outdated. What does it even mean? Not mentioning your tubal ligation on your Facebook page? Not tweeting about your disintegrating marriage?

Nothing is confidential anymore; those who'd like to pretend otherwise are greeted with suspicion and raised hackles. In an age when "community building" seems indelibly linked to casting your secrets into an unfathomable digital void, self-censorship can strike people as downright unneighborly. Information wants to be free, and no doubt about it, it's prepared to break your kneecaps and make a run for it if necessary.

A stubborn desire to breathe new life into deep, dark secrets and long-protected mysteries lies at the heart of Sci Fi's "Warehouse 13" (premieres 9 p.m. on Tuesday, July 7), a drama series about a structure in the middle of the Badlands of South Dakota that's home to a vast collection of ancient treasures with mysterious powers. This is where some shadowy branch of the government keeps artifacts safe from the nefarious forces in the world that might use them to do evil.

That's right: "Warehouse 13" is about a place, filled with things -- not just things but secret things with invisible powers (that aren't digital). Have you ever heard of anything quite so old-fashioned in your life?

Two secret service agents, Myka (Joanne Kelly) and Pete (Eddie McClintock), certainly haven't. When they learn that they've been whisked away to this clandestine location so that they might spring into action each time some powerful tchotchke slips into the wrong hands, our heroes are less than enthused. Not only is the warehouse creepy and cluttered, but it's guarded by Artie Nielsen (Saul Rubinek), a scattered hippie-professor type who alternates between easygoing cookie baking and panicked rummaging through the relics in his care.

Of course, if "Warehouse 13" tried to tout itself as a sophisticated drama like "Fringe" or "Battlestar Galactica," it would fail miserably. You can't offer up an enormous storage space filled with old paintings and chalices and crystal balls and not make the mood a little goofy and retro. Luckily, everything, from the old-timey, staticky intercom device the agents use to communicate with Artie to the enormous, rusty warehouse itself (Is there anything more outdated than the warehouse, in this age of digital bartering?), offers little nudges and winks that we're not supposed to take these adventures too seriously; rather, we should enjoy them as sweet and light and faintly nostalgic, like a spirited mix of "The X-Files" and "Chitty Chitty Bang Bang."

In the first episode of "Warehouse 13," Myka and Pete investigate a particularly creepy case of assault that involves a good-natured college boy suddenly beating up his girlfriend while chanting ancient Italian texts. (Any time anyone starts chanting in Italian, you can assume that some satanic force is behind it.) The two agents uncover clues with the typical degree of misdirection: Could the boyfriend be evil? No, too obvious. How about the slightly evasive professor or that eerie rich lady with the jealous ring to her voice?

But crime solving is just one moving part in this strange invention, which feels a little awkward and hokey -- this is Sci Fi, after all -- but shifts gears pretty smoothly from kitschy to edgy to creepy and back again. Still, the whole mess threatens to fall from the sky at any minute despite a wide array of magic tricks: twists and turns, poignant back story, witty banter, awkward pauses, heartfelt exchanges. There are times when you have to question the writers' urge to pack in everything but the kitchen sink: Here's a mysterious death, followed by a joke, followed by an unnerving encounter, followed by some clever dialogue, followed by a disturbing hallucination. It's a little hard to know where this wild and bumpy ride is headed after a while.

Fortunately, Kelly and McClintock pull off their roles in this precarious high-flying adventure, teetering between heaviness and humor in each scene. Myka is your run-of-the-mill kick-ass female character, the likes of which were so rare just 10 years ago but now dominate the small screen, particularly during the summer months. Pete, on the other hand, is a new animal: half effective agent, half hapless boy. Most of the time, Pete feels like he wandered off the set of a broad comedy like "Old School" or "Knocked Up" and somehow wound up with a gun in his hand. In one of the last scenes of the first episode, when demons are running wild and madness is in the air and the whole thing is swerving dangerously close to dorky "Raiders of the Lost Ark" territory ("Indy, cover your heart!"), Pete gets so spooked that he tries desperately to play it off by joking around with the hypnotized zombies in his midst. The moment completely undercuts the drama of the scene, yet it's indescribably, stupidly funny.

But does it really work, just because we laughed? Sometimes comedy is just a convenient reset, like a stiff drink with your in-laws that smoothes the conversation but also fogs your memory of what was said. No wonder dramas without jokes are as outdated today as deep, dark secrets that have yet to be transformed into Twitter updates. Skim the summer schedule and you'll be hard-pressed to find a single drama that doesn't have a strong undercurrent of humor in it: "True Blood" without a sense of humor is just a bad B-movie that never ends. "Mad Men" without humor is just a disturbingly detailed flashback. "Burn Notice" without a sense of humor is "Miami Vice."

Are we too impatient and glib to stomach drama without comic relief? OK, I know I am, but are you?

Of course, nothing makes me more impatient and glib than the news that Sci Fi is changing its name to "Syfy," reportedly to make it clear that the channel includes not just science fiction, but fantasy, the supernatural and the paranormal.

Don't scoff! Branding is important these days. Why, just the other day I was considering changing my name from Heather Havrilesky to SeaDonkia Fleur, to make it clear that I'm not just a TV critic but also a human being, a digital word artist, and a handy disposable wipe. If people see the name "Havrilesky" they might not understand every facet of what my "brand" has to offer, but if they see "SeaDonkia Fleur" they'll know that I'm a complete asshole.

Likewise with Sci Fi. The brand name "Sci Fi" is too regular and respectable and easy to understand, let's face it. But Syfy? Like a typo or a mumbled acronym for an STD or the name of an angry little dog in a scratchy pink sweater, Syfy is something we ignore for as long as we can, cringing and fighting the urge to drop-kick it back to its idiot owner. Syfy is so artless and dorky and weak, it begs to be demeaned and disrespected.

But that sounds about right, doesn't it?

Of course, not every show on the Channel Whose Name We Feel Dirty Using And Therefore Won't Until We're Forced To is as embarrassing as the silly notions of its reckless overlords, and not all dramedies are glib. Just look at "Eureka" (9 p.m. Friday, June 10, on Sci Fi), a show that's at once goofy and deeply earnest. "Eureka" may be a little awkward, but what it lacks in sophistication and slickness it makes up for in clumsy sweetness and pure intentions, as if "Doctor Who" wandered down to Mayberry to seek advice from Andy Griffith.

Apparently the show's writers are aware of this particular appeal: The first episode of the fourth season of "Eureka" finds former sheriff Jack Carter (Colin Ferguson) being replaced by a robot sheriff that, once it extracts itself from its own box, "Terminator"-style, dons a good-guy smile and introduces itself as "Andy." Andy is designed to be the perfect replacement for Jack: He carefully analyzes the facts, then draws logical conclusions from them.

Yes, we know where this one is going: Sticking to the facts is no way to navigate the topsy-turvy happenings in the messed-up little town of Eureka, with its population of half-crazy geniuses. The stakes are high around these parts, too: The entire world is about to end thanks to something happening in Eureka in about four out of five episodes.

Maybe this explains why the townspeople remain reasonably relaxed and happy, even when the apocalypse is imminent. When Jack's computerized house S.A.R.A.H. tries to kill the new robot sheriff, she explains herself by calmly telling Jack and his daughter, Zoe, "I apologize. I let my artificial emotions get the best of me." There's something about this optimistic mood that keeps "Eureka," in all of its cgi-aided foibles, light and enjoyable. If the show took itself too seriously, we'd chafe at its corniness.

Like Mayberry, Eureka has miles and miles and miles of heart. Even Andy the robo-sheriff chuckles amiably and shakes his head instead of getting competitive or homicidal in the face of a threat to his authority. When Jack invites him to a party after a big disappointment, he says, "I think I need to spend a little time in my box, you know, sortin' things out." You have to appreciate a town optimistic enough that even the robot cops are respectful and contemplative. Yes, the residents here are moody and sometimes envious, but they're most definitely not glib.

How do they maintain their optimism, in the face of such nonstop peril? If we could solve that mystery, we might stop wasting our time posting updates on Facebook and Twitter and step outside for some good, old-fashioned analog appreciation of time and space and people and places and other antiquated stuff like that.

Fiction I Like To Watch Science Fiction And Fantasy Television