It's yielded pounds of produce, and good will from activists, but will the White House garden change food policy? 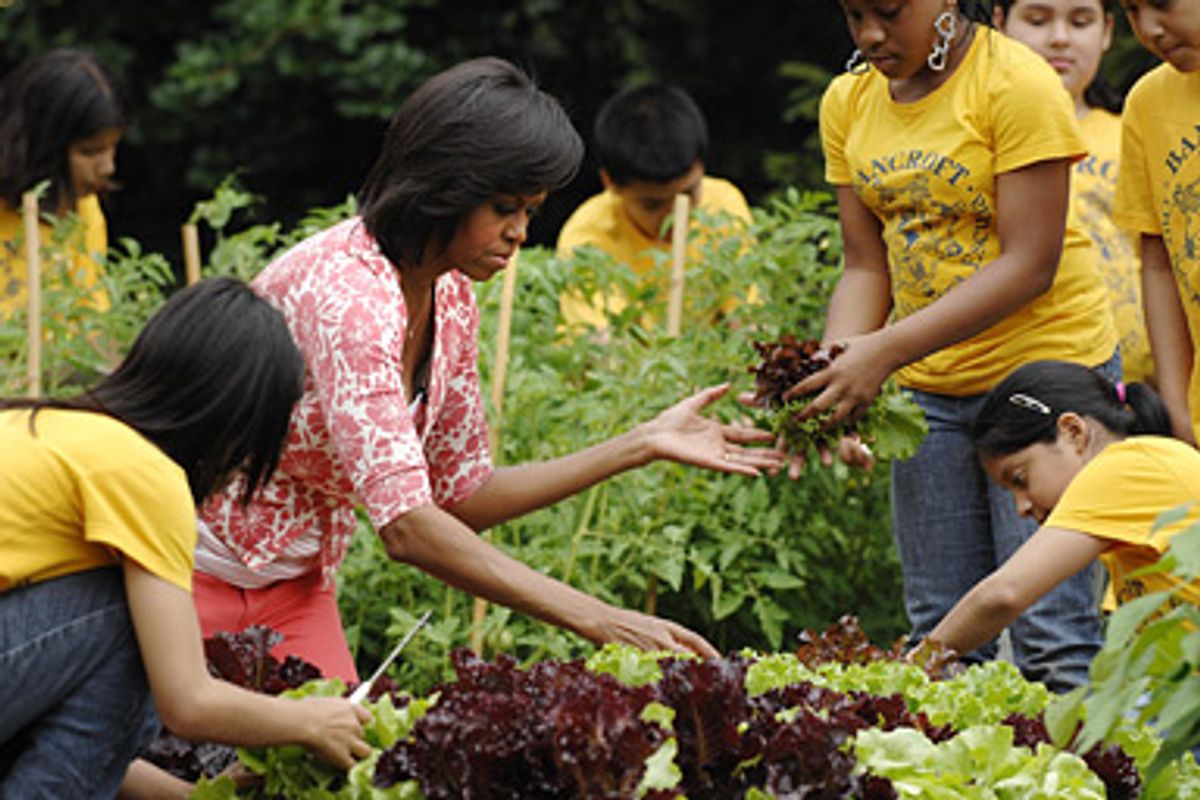 U.S. first lady Michelle Obama cuts lettuce with students from Bancroft Elementary School as they harvest vegetables from her garden at the White House in Washington June 16, 2009.
--

It was harvest time for the first wave of crops from the local vegetable garden, so the kids who had helped plant it a few months earlier came back to visit recently. Working with a few professional supervisors under the eye of their host, they pulled up a big bounty: 73 pounds of lettuce, 12 pounds of peas and one cucumber (which had originally been white but was yellow by the time the kids got to it). And then they all went inside to cook, before returning to the garden to eat.

That wouldn't have been particularly newsworthy, of course, except that it all happened at the White House, and the host for the harvest lunch was Michelle Obama. "My hope is that [through] this garden, we can continue to make the connection between what we eat and how we feel and how healthy we are," she told the kids, all from a D.C. neighborhood about three miles from the executive mansion. The harvest a couple of weeks ago was the culmination of a few whirlwind months at the White House, taking the crop from seeds to salads amid a media frenzy.

Before President Barack Obama took office, the progressive food community was in such a frenzy expecting changes in the way Americans think about, grow, buy and eat their food that more than a dozen famous chefs threw a dinner party the night before his inauguration to celebrate. Obama had paid slightly more attention to food policy on the campaign trail than most other recent presidential nominees, pledging to help support small independent farmers, not massive corporate agribusinesses. Six months later, though, the garden is probably the most significant step the administration has taken toward the broad goals the campaign laid out last year. The Agriculture Department has only recently filled crucial positions dealing with policy, and what's likely to be the year's biggest showdown over food issues -- legislation in Congress to reauthorize the federal school lunch program -- looms later this summer.

"We think that the jury is definitely still out," said Ferd Hofner, policy director at the National Sustainable Agriculture Coalition, a Washington-based group that's pushing for more federal support for local food systems and farming techniques that don't harm the environment. "There have been a lot of atmospherics, but only a few substantive things so far ... We're feeling fairly positive that stuff is on the way -- we're just not entirely sure when it's going to be unveiled."

Activists say they hope Michelle Obama's events around the garden, aimed mostly at encouraging people to eat more healthful food than the processed junk that's often the cheapest and most plentiful, turn out just to be the vanguard of a busy agenda. And they say not to underestimate the symbolic power that the garden can have.

"This is a new way of talking about food," said author Michael Pollan, whose recent books have explored the downside of cheap industrial food. "This may not seem very novel to you, as somebody who I'm sure knows your way around a plate of arugula ... [but] she has the power to draw attention to the way we're eating in a way that few people can, and not draw too much criticism." (She has drawn a little flak, though, from groups that prefer conventional agriculture to the organic garden at the White House.)

Aides to the first lady say that they realize the platform she has, and that the work on food dovetails with the administration's broader focus on healthcare reform, especially focusing on preventing people from getting sick in the first place, instead of waiting to treat them once they are. "We wanted to initiate a conversation about healthy eating," Jocelyn Frye, Michelle Obama's director of policy, told Salon. "We have in mind a goal of getting us to a place where we are in a position of talking about some of the more serious health outcomes, whether it's childhood obesity or increased risk of diabetes ... a whole host of conditions that people think are linked in some way to what they're eating." So besides serving fresh vegetables grown in the garden, the White House also prepared baked -- not fried -- chicken for the harvest lunch.

The garden has been more than just a prop for photo ops. Assistant White House chef Sam Kass, whose other title is "food initiative coordinator," told Salon the kitchen staff has been using at least some produce grown on-site every day. So far, it's yielded more than 225 pounds of food -- right now, beans, tomatoes, eggplant and cucumbers are in season -- some of which the White House has donated to a local food bank that serves meals made from fresh ingredients only. But the goal isn't necessarily to get everyone in the U.S. gardening, which isn't really possible unless you have the land and the time to tend crops. "This isn't about 'Everybody grow all their own food,'" Kass said. Instead, "we try to reestablish connections to the people in our society who really grow the food, from there to us eaters rethinking what we're putting in our bodies and what we're feeding our kids."

The garden also doesn't necessarily put the Obama family dead smack in the middle of the locavore movement. "We try to source seasonally as much as possible" for the White House kitchen, Kass said. "Oftentimes food grown around here is just tremendous, and it's in season, and we'll buy that. But we also are America's kitchen -- there's no rule about we only buy food from a 100-mile radius."

Food policy experts think the garden has had some impact on the public at large, though it's hard to measure exactly how much. Agriculture Secretary Tom Vilsack -- whose appointment some activists had criticized because of his sympathies to big agribusiness enterprises when he was governor of Iowa, but who many now say has been a surprising ally -- says seed sales have gone up since the garden was unveiled. Municipal officials in Baltimore, Portland, Ore., and other cities have planted vegetable gardens at city government buildings. Pollan said he was contacted by cable TV networks after Obama planted the garden, wanting to do stories on "the type of food" the first lady was talking about, which hadn't occurred to the networks earlier despite years of work by advocates of sustainable agriculture.

That may not all be due to the White House, naturally. "Was the White House garden the thing that triggered them to do it, or were they all kind of tapping into this same kind of movement at the same time?" asked Roni Neff, research director at the Center for a Livable Future at Johns Hopkins University's Bloomberg School of Public Health. But things like the popularity of Pollan's books, the new movie "Food, Inc.," and the hints the administration is giving about where it plans to take policy indicate that the way Americans deal with what they eat may be shifting.

Still, at some point, the administration will have to translate symbolic gestures into more specific actions. "In terms of whether we had expected that it would all happen next month or by September, I don't think any of us thought it would happen that quickly," said Katherine Ozer, executive director of the National Family Farm Coalition. "But we also want to make sure that issues that were raised during the transition are not filed away to wait five years." A half-hearted attempt to cut federal payments to big corporate farms fizzled earlier this year, and advocates are still waiting to see how the Agriculture Department drafts new regulations on crop subsidies and how aggressively the Justice Department enforces antitrust laws on farm issues. Some broader changes probably can't be dealt with until Congress reopens the Farm Bill in five years; independent farmers are pushing to revisit it sooner than that, but that isn't likely.

The administration has already signaled, in part through Michelle Obama's work on the garden, that it plans to use the school lunch bill to move the discussion forward a bit. "We need to improve the quality and nutrition of the food served in schools," the first lady said at the harvest lunch. "We're approaching the first big opportunity to move this to the top of the agenda with the upcoming reauthorization of the child nutrition programs. In doing so, we can go a long way towards creating a healthier generation for our kids."

But for now, food progressives seem so pleasantly surprised to have an ally in the White House that they're willing to wait a little bit longer for more concrete action. "Having been at this for more than three decades, I was sort of ho-hum [about the garden] at the beginning," said Hofner, with the Sustainable Agriculture Coalition. "Now I'm really much more excited about it, because I realize how much younger people in the field are so excited about it and how much weight it really carries in terms of what it means to them and how it helps them to be wanting to be passionately involved in the process ... I can't say anything bad about it."