All sides blame McNamara for Vietnam

People for and against the war agree on one thing only: It was Robert McNamara's fault 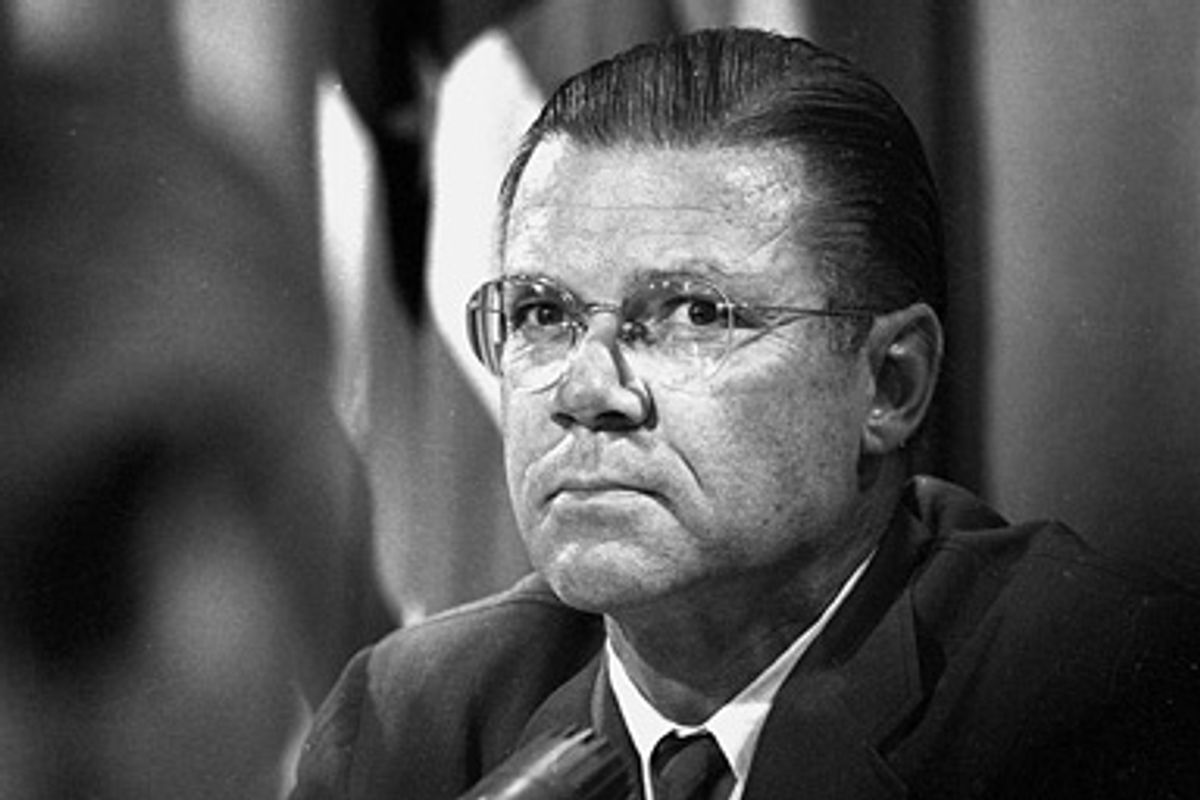 Robert McNamara has died. Notwithstanding his previous career at Ford in the 1950s and his later career as president of the World Bank, Robert Strange McNamara will always be remembered for his service as secretary of defense for the Kennedy and Johnson administrations during the height of the Second Indochina War, known in the U.S. as "the Vietnam War." In death, as in life, he is likely to prove to be a Rorschach test for what people think about that conflict and the four-decade Cold War of which it was part.

The clue to McNamara's significance is that he was demonized by the left, the right and the center. If there is a Rorschach Prize, he deserved it. Other American public figures have been hated by one side, but usually they have been defended by the other. I can't think of anybody else in American history whom liberals, conservatives and moderates all joined in denouncing.

Why? The vitriol that was directed against McNamara always seemed excessive and even unhinged to me. After all, he wasn't the president. Why not blame Kennedy for deepening the U.S. involvement in Indochina, or Johnson for escalating it, or Nixon for prolonging it? But Kennedy, Johnson and even Nixon have had their partisans, who have sought to minimize the collateral damage done to the reputations of these presidents by their failed Vietnam policies.

The partisans of the Kennedys have been particularly busy rewriting history in order to turn the brothers from anti-communist cold warriors who tried repeatedly to murder Fidel Castro and were entranced by the romanticism of counterinsurgency into doves, while casting the reluctant, cautious Lyndon Johnson as a deranged hawk. By the end of the 20th century, more and more aging people were claiming to remember that Jack Kennedy had secretly promised them that he would abandon Indochina to the communist bloc if he were reelected, a remarkable example of repressed-memory syndrome unknown elsewhere except among people who claim to have recovered memories of UFO abductions. How convenient it was, then, to declare that the "architect" of the Vietnam War was neither Kennedy nor Johnson but their secretary of defense. "The Tsar is good, the mistakes are to be blamed on his ministers."

It was McNamara's misfortune that he, rather than other candidates for sacrifice -- McGeorge Bundy, say, or Walt Rostow -- was singled out to be the scapegoat for what, after all, was the central, catastrophic failure of the Kennedy-Johnson administration as a whole. Why the disaster in Vietnam came to be so widely blamed on the secretary of defense rather than on National Security Advisers Bundy and Rostow is not clear. Unlike Henry Kissinger, who for better or worse was the strategic mastermind of the Nixon administration, McNamara, who had intellectual interests including a love of poetry, was not himself an intellectual, like Rostow, with his theory of communism as a "disease of modernization," or theorists of limited war, including the young Kissinger. Some of the traits that are often attributed to McNamara, like excessive confidence in technocratic solutions, were those of his generation, not personal idiosyncrasies. And the self-assurance that seemed to irritate so many critics at the time (many of whom were unaware of his private agonizing over the war) was, and remains, a character trait common among the powerful in Washington and other capitals.

For whatever reason, McNamara instead of other figures below the presidential level was singled out in the public mind as the iconic symbol of failure in Vietnam.  But this still does not explain how people who disagreed on everything else have so often agreed to make McNamara the symbol of all that was wrong in American foreign policy.

The solution to the mystery is simple, if subtle. There have been three influential critiques of the Vietnam War. The critiques are those of the antiwar left, the pro-war right and the realist center. Each critique generated its own image of McNamara to fit its own theory of the Vietnam War.

On the left, many in the antiwar movement argued that the Vietnam War was a Nazi-like atrocity. It was not a justified war in which war crimes were committed. The war itself was a crime, a war of colonial depredation that had no genuine relation to the larger Cold War, except in American propaganda. It follows that Robert McNamara was a war criminal. Needless to say, to denounce McNamara, the implementer of Kennedy-Johnson policy, as a war criminal, without denouncing Kennedy and Johnson as war criminals, too, was as absurd as denouncing Himmler for the Holocaust but not Hitler. But this inconsistency does not seem to have bothered many members of the antiwar left.

On the right, most conservatives supported the Vietnam War as one of many legitimate battles, including the Korean War, to thwart the expansion of the communist bloc by invasions or communist takeovers supported by the Soviet Union and/or Mao's China. Just as they had done during the Korean War, however, conservatives denounced a Democratic administration for allegedly holding back the U.S. military. Just as the right accused the Truman administration of needlessly throwing away victory in Korea by restraining and then firing Gen. MacArthur, so the right accused the Johnson administration of needlessly throwing away victory in Indochina by restraining Gen. William Westmoreland. This "stab-in-the-back" theory of the Vietnam War, blaming timid civilians like McNamara and LBJ for forcing the U.S. military to fight with one hand tied behind its back, was popularized by the late Col. Harry Summers after the war and is still the dominant view on the American right.

As if that weren't enough, McNamara was a convenient whipping boy for the realist center, identified with George Kennan and Hans Morgenthau. Both opposed the U.S. intervention in Indochina, as they had earlier opposed the U.S. intervention in Korea (a fact that is now forgotten), by claiming that according to their calculations of geopolitical significance neither Indochina nor Korea was militarily significant. Unlike the antiwar left, the realists did not oppose war in principle, nor did they think that the U.S. was a malevolent power. Unlike the anticommunist right, they argued that the Cold War was really a clash of traditional great powers rather than an ideological or civilizational struggle. The realists argued that supporters of the Vietnam War had committed a mistake not of the heart but of the head. They displayed the "arrogance of power," they were "hubristic," and so on. (Note that desperate gambles that succeed never display the arrogance of power or hubris; in hindsight, successful policies are prudent and statesmanlike by definition.)

The Vietnam War was a crime to the left, a betrayal to the right, and a mistake to the realists. It followed that Robert McNamara, the ritual scapegoat chosen to stand in for the Kennedy and Johnson administrations, was a war criminal to the left, a near-traitor to the right, and a fool to the realists. Had another scapegoat like Bundy or Rostow been chosen instead of McNamara to symbolize the failure of Vietnam, that individual would have been denounced with equal fervor as a hubristic fool by the realists, a near-traitor by the conservatives, and a Nazi-like war criminal by the radical left.

Nobody takes seriously anymore the claim made by many radicals at the time that the Second Indochina War was merely an anti-colonial rebellion that had nothing to do with the wider Cold War. Following their victory in 1975, the aging Stalinists of Hanoi proudly boasted of their sponsorship of the Viet Cong in South Vietnam and displayed their orthodox Marxism-Leninism. After years of playing their Soviet and Chinese sponsors against one another, the Vietnamese communists became a completely dependent Soviet satellite state, inspiring post-Mao China to attack it in 1979.

The moral case against the damage done to the Vietnamese population and landscape by U.S. firepower and Agent Orange defoliation is compelling. But the U.S. effort in Korea was even more devastating, and the U.S. efforts in World War II included the incineration of German and Japanese cities by conventional and atomic bombing. To the historian, the case that the Vietnam War was a unique atrocity in itself is hard to make.

The conservative stab-in-the-back theory of the Vietnam War has flaws of its own. If only the Johnson administration had "unleashed" the full power of the U.S. military, by invading the North or bombing the dikes, then the war would have ended quickly, with far fewer American and Vietnamese casualties, with a reunified noncommunist Vietnam or perhaps a Korean-style stalemate lasting to this day. What this attractive might-have-been ignores is the fact that the Johnson administration feared that China, which was already supplying North Vietnam with hundreds of thousands of logistics troops, might engage in full-scale war with the U.S. in Vietnam as it had done in Korea. The evidence that has emerged from China since the end of the Cold War suggests that Mao very well might have intervened directly, had the U.S. gone too far. The Johnson administration in retrospect was far from stupid in trying to prevent Vietnam from escalating into a second Sino-American war.

The realist account probably has the most adherents today. Vietnam was of no long-term strategic significance and could have been sacrificed by the U.S. without a fight, with no lasting damage to America's power and reputation. Perhaps. And perhaps the U.S. could have forgone the Berlin Airlift -- West Berlin, after all, was of no intrinsic strategic significance -- and the Korean War and the defense of Taiwan, as well. Maybe U.S. allies both great (like West Germany and Japan) and small would not have appeased the Soviet Union out of fear, as Moscow went from victory to victory, defeating the U.S. through intimidation or proxies in one conflict after another. Seven presidents disagreed. From Truman to Reagan, American presidents, liberal and conservative alike, thought that from Berlin to Indochina and Korea they were defending America's reputation as a powerful and determined defender of weak allies, not simply physical assets, like the sea lanes and iron deposits so beloved by realist thinkers.

One problem with realism during the Cold War was the tendency of many realists to denigrate the ideological aspects of conflict as somehow insignificant compared to material factors, or to explain them away as camouflages for "real," that is, material and military, interests. This line of thought was as inadequate in accounting for zealous Marxist-Leninists then as it is in understanding zealous Islamists today. The realist case is weakened further by the fact that realists seem unable to disagree on what areas are strategic and what are not, except, in all too many cases, after the fact. How many realists today denounce the Korean War along with the Vietnam War? Had the Vietnam War ended in a Korean-style stalemate, with a rotting North and a rapidly modernizing South, how many realists today would be arguing that containing communism in Southeast Asia was folly?

What will historians in the future say about Robert McNamara and his role in Vietnam? I suspect that in the decades to come, historians will increasingly integrate the Second Indochina War -- and the first, and the third -- into the overall history of the Cold War, rather than treat it as an isolated episode or free-standing morality play. Beyond that, it will all depend on who writes the history. One prediction is safe: What historians of tomorrow think of Robert McNamara will depend on their view of the Vietnam War.