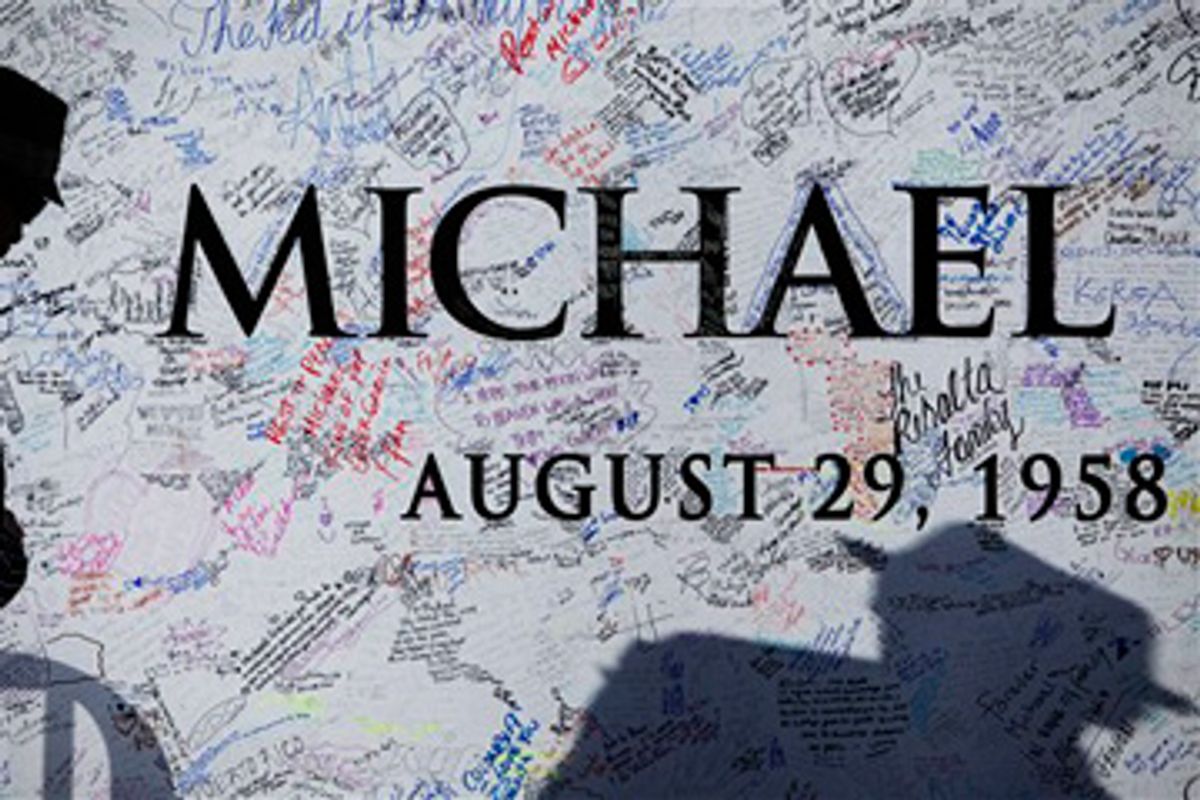 3:45 p.m. The brothers, identically attired, stand together with Janet and other members of the family. They look uncomfortable and fidgety and sad. “We will never, ever be able to understand what he endured,” says elder brother Marlon, “being judged, ridiculed. How much pain can one man take? Maybe now, Michael, they’ll leave you alone.” Through tears Marlon remembers his deceased twin and asks Michael to send his regards.

And then a very pretty ten year old young girl with long straight hair hesitatingly steps up. “Speak up,” says Janet soothingly, as a swarm of sparkly gloved hands adjust the microphone for her. “Daddy has been the best father you can imagine,” says Paris Jackson, “and I just want to say I love him so much.” As she’s led off by her family, she breaks down in tears.

He was “the greatest entertainer in the world.” He was a freak show. He was an accused abuser. His sendoff was grand and tacky and weird, a somber tribute and a big show. It wasn’t like the kind of memorial you’d get for anyone else, because the Jackson family isn’t like any other.

He was also brother and son, “the best father you can imagine.” He was, like all of us, merely human, fragile and perishable. The show’s over, folks. But for his friends and foes and fans, the circus surely goes on.

3:30 p.m. Jackson choreographer Kenny Ortega, known to millions only as the guy who did “High School Musical,” introduces the final number. It’s version of the “We Are the World” they’d been working on for his comeback tour. Everyone assembles on the stage, including what appear to Jackson’s children (hard to recognize them without the veils), to an assemblage of religious iconography.

Lionel Richie looks either deeply in the moment or supremely bored, eyes rolling heavenward as we segue into “Heal the World.” A children’s chorus comes out, and if you’re both strangely moved and deeply, deeply creeped out right now, that’s about right.

3:25 p.m. Smokey Robinson brings us back from the bring of shmaltz overload with his classy remembrance of meeting the Jacksons, and young Michael’s powerful talent.

But wait, back into the jaws of tastelessness we go, as "Britain’s Got Talent"’s own Susan Boyle trouncer, Shaheen Jafargholi, delivers “Who’s Loving You?” Twelve year old Shaheen, watch. Watch and learn.

3:15 p.m. Usher performs “Gone Too Soon” to a slide show of Jackson photos, heralding a return to the show’s ambitious, woooo-ooooo-oooo vocalizing. Then, abandoning any last vestige of restraint, he steps down and addresses himself directly to the coffin, placing a tender hand on it. And though his voice cracks as he nears the end of the song, the dramatic whipping off of the sunglasses for the final notes will, I promise you, be parodied far and wide.

3:00 p.m. Jermaine Jackson performs a pared down, emotional version of “Smile,” a  musical ode to “the show must go on” stoicism. “Smile, though your heart is aching,” he sings, “Smile, even though it’s breaking.”

Bernice King and Martin Luther King III move on to offer their tributes, and words of Christian solace. Noting her mother’s deep appreciation of his work and music, Ms. King says that “despite being embroiled in accusations and persecutions… he was indeed a shining light.” It’s a strange and near defiant acknowledgment of the persistent and troubling and criminal lawsuits that surrounded him.

Can you deliver a convincing tribute to an accused child abuser? Nope. But give credit for acknowledging the darkest aspects of his life.

2:45 p.m. Brooke Shields, who "dated" Jackson in her own showbiz youth, is visibly shaken and tearful. Her grief seems palpable and bottomless, not just for the loss of her friend, but the loss of both of their childhoods. And she notes pointedly that she started working at eleven months, teasingly calling him “a slacker” for starting at age five.

When they were alone, she says, they were just … kids. Sharing her stories of those fleeting moments of juvenile laughter makes the sorrow all the deeper. Quoting “The Little Prince” she reads, “He was even more fragile than I realized.”

Jackson rolls over in coffin.

As they depart the stage, let us take a moment to note that we will likely not see another lineup of grieving brothers in sunglasses and single, sparkly gloves in our time.

Unless it catches on.

A pregnant Jennifer Hudson, whose brother and nephew were murdered last fall, is a ferocious angel singing in a flowing white dress. Even the freakiness of being encircled by dancers and being upstaged by a tearful-voiced recording of Michael himself. She remains steadfastly radiant with life, furious with death.

Al Sharpton, in contrast, bellows unblinkingly from the pulpit. “It’s not about mess, it’s about message.” This is one speech that’s a mess.

2:15 p.m. From the moment Stevie Wonder -- who knows a thing or two about being a prodigy -- was confirmed for Jackson memorial, was there any doubt what song he’d perform?

Wonder’s voice is strained and breathy, but the wallop of “I Never Dreamed You Leave in Summer” cannot be denied. Of the few musical artists alive who’s come anywhere near Jackson’s stature, even fewer can break your heart. But with his aching ballad, the man once known as Little Stevie reminds us why they call it “soul.”

2:00 p.m. After Lionel Richie sings about Jesus, Berry Gordy hits all the right notes delivering his memories of hearing the Jacksons for the first time. What must it have been like for Gordy, in the late 1960s, to see a child with such talent? Recalling the “passion” with which he sang “Who’s Loving You,” he admits the boy outperformed its originator, Smokey Robinson. And he confesses Robinson agreed.

“Michael loved it all,” he says, “every moment on stage.” He calls him “quiet and shy” in his personal life but “kill or be killed” in performance. The founder of Motown calls Jackson “the greatest entertainer who ever lived.” The crowd thunderously concurs.

Mariah Carey, who memorably covered “Ill Be There” for MTV Unplugged in the early nineties, gets bonus pop culture grief points for rocking the Farrah hair as she sings the song to Jackson’s coffin. Yet even the diva can’t diminish the chills that the song inspires, its simple, graceful pleasure.

How fitting that Carey’s glass shattering is followed by a warm, sincere, and giddy tribute by Queen Latifah. As she laughs remembering practicing her dance moves with her brother (who died several years ago in a motorcycle accident) to “Dancing Machine,” Latifah brings an earthy sensibility to the glitz.

But as she segues into an original poem by Maya Angelou, the words seem less assured. Angelou’s sentiment that Jackson was sheathed in the warmth of family rings far less sincere than Latifah’s own “He was the biggest star in the world.”

1: 30 p.m. It’s not easy putting on the greatest memorial show on earth. As delays abound at the Staples Center before the Jackson tribute, the networks are scrambling to fill air time with a desperate anticipation that’s grimly fascinating.

And finally, as the gospel piano starts, here we go. “Soon and very soon, we are going to see the king.”

Jackson’s flower laden coffin has been brought out. This is the strangest funeral since King Tut, and yet, who could be unmoved, knowing what we do of the frail, haunted man inside that box?

1 p.m. Rarely do the words “somber” and “star studded” go hand in hand. But who else inspired contradictory adjectives like Michael Jackson did, a man whose memorial features a traditional black hearse and a pimped out gold coffin?

Surely the minutes before Jackson’s memorial will go down as the most frenzied hour in television punditry. On Fox, Greta Von Susteren noted with a tinge of disappointment that there was “no sign of pandemonium” outside the Staples Center, while on CNN, an in house analyst mused that “99% of all artists” who’ve followed Jackson have been influenced by him.

As the split screen followed the procession from Forest Lawn to the Staples Center, networks scrambled to get everyone who’s ever written for Ebony or Billboard to patiently explain, for the umpteenth time, why “Thriller” mattered. It was a mix of eulogizing and “HEY, ISN’T THAT LARRY KING?”

Again and again throughout the day, the question that keeps popping up is, will we ever see a star of Jackson’s caliber again. And when an E! reporter chirpily announces that the Kardashians are expected to appear, one thinks that’s a question that answers itself.

That’s why we watch. Stardom has become as small as this week’s reality competition winner. But Jackson was nothing if not outsized, in his weirdness, in his scandal, but ultimately, undeniably, in his talent. And nobody else could get the networks to straightfacedly speculate on whether a golden coffin will be airlifted via helicopter for the big finale;

On CNN, a tearful, ticketless fan who’d driven in from Georgia told reporters she just wanted to see Jackson one last time. So do we. Let’s put on a show.