The significance of McClatchy's act of journalism

Yet another story reflects the danger of assuming the truth of unproven government claims and the use of anonymity.

McClatchy's Nancy Youssef has an article today that is a consummate example of excellent journalism.  I don't want to excerpt any of it or even summarize what it reports because I really want to encourage everyone to click the link and read it in its entirety (it's not very long:  roughly 1,300 words).  Please read Youssef's article before reading the following points I think are worth making about it:

(2) Even now, defenders of Obama's preventive detention policy (i.e., indefinitely imprisoning people with no charges) insist that this is necessary because those in Guantanamo are "too dangerous to release" and we cannot convict them in a real court.  What's their basis for believing that people who have been convicted of absolutely nothing are nonetheless "too dangerous to release"?  The Government -- our trusted leaders -- claim it's true, so it must be.  No matter how many stories there are like the one today from McClatchy's -- where emphatic accusations about a detainee turn out to be totally false -- the willingness to believe unproven assertions from government officials about Muslims detainees is never-ending.

(3)  The central assumption in our discussions of Guantanamo and detention policy generally has been, and continues to be, that those in Guantanamo are, by definition, Terrorists.  No matter how many times that is proven to be false, the assumption endures.

(4) Note the central role The New York Times played -- yet again -- in spreading and given credence to pure government propaganda.  And the method used to accomplish that is exactly what led them to help disseminate lies about the "Iraq threat" in the run-up to the war:  anonymous government sources leak something, they mindlessly print it without identifying who gave it to them, Dick Cheney cites the NYT article to bolster the lie, and then -- even once the NYT is forced to admit they were used -- they not only protect the identity of the anonymous sources who manipulated them, but they'll use the same exact method tomorrow -- and the day after and the day after that -- to report the "news."

What Judy Miller and Michael Gordon did in September, 2002 on the front page -- that the NYT supposedly regrets so much -- is exactly what Elisabeth Bumiller and her editors did here on the front page.  As a result, a blatant lie -- that 1 in 7 released Guantanamo detainees "returned to jihad" -- became, as intended, embedded fact in our political debates.

(5) It cannot be overstated how flimsy is the basis for so many accusations of "enemy combatant" status from the U.S. Government.  Wakil is someone who -- as the Bush administration knew and admitted since as early as 2004 when it conducted a status review hearing --  actively opposed the Taliban and al Qaeda: 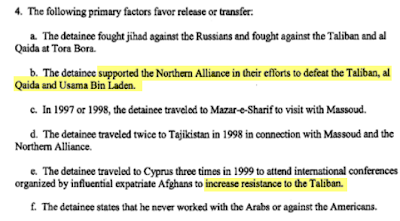 Despite all of that, the Pentagon continued to keep him in a cage for four more years based on extremely vague associations that led them to insist that he was an "enemy combatant."  So we invade and occupy his country and then decide that -- although he worked against our Enemies -- some alleged "associations" he had reflect an agenda that conflicts with ours and a "source's" unverified accusations that he helped our Enemy entitle us to lock him away.  So we abduct him from his country and ship him thousands of miles away to an island, stick him in a cage for six years with no trial, call him an "enemy combatant," and then once he's released, he does nothing to engage in any violence or attacks on the U.S. of any kind (even though we're still bombing and occupying his country).

There are so many cases like that:  where alleged "enemy combatants" -- The Worst of the Worst -- were released, and the notion that they are dangerous proven to be utterly false.  Despite that, morally depraved people still blithely demand that anyone we deem to be a "combatant" be kept in a cage "forever" with no trial or charges of any kind, even if they are acquitted of the charges against them.

(6) As the McClatchy article reflects, what is and is not real "journalism" is not that complicated.  The government makes a claim.  The role of the "journalist" is not to repeat it or merely report that the government claims it, but instead, to investigate it with skepticism to determine whether it is true, and then report if it isn't.  And journalists don't have to wait for a member of the "opposition party" to call them and object before doing so.  That's so basic that it's staggering to believe that it is disputed, and yet not only is that proposition disputed, it is explicitly rejected by many -- if not most -- establishment journalists.  And in that fact lies much of the explanation for what has happened in the U.S. during this decade (at least).

UPDATE:  In noting the cruel irony that Wakil's plight of being declared guilty with no trial is now repeating itself -- as he's accused by the DOD's leaked report of having "returned to terrorism" -- the McClatchy article contains these truly ugly passages:

Despite his bravado, Wakil acknowledges that the report has him worried that he'll be detained again.

Never out of his reach are a stack of legal documents, letters signed by scores of high-ranking officials and frayed newspaper clippings that he believes prove that he isn't — and never has been — a terrorist.  Documents in hand, he's always prepared to make the case he was never given the opportunity to make at Guantanamo.

"For six years, I was ready to go to court and defend myself. They should show the world their proof against me," Wakil said. "I am ready to answer any question". . . .

He raised his voice only once, as he described his anger that once again he's facing accusations and no trial.

"Where is the justice? I am still being threatened because of this," Wakil said, his arms flailing.

So here we have an Afghan citizen, not captured on any battlefield, who naively thought that he would be given a "trial" before being locked in a cage indefinitely by the U.S.  He obviously hadn't heard that the U.S. is a country-- because of people like this -- that knows "trials" are obsolete and insists that we can abduct anyone we want from around the world and lock them away forever without such bothersome procedures.  Wakil surely knows that by now, which is why he fears -- quite reasonably -- that he'll be locked away again with no trial based on the Pentagon's anonymous accusations against him (and based on the current President's demand for the power to keep people imprisoned "preventively" -- i.e., with no charges or trials).

As for the "justice" Wakil seeks:  sorry, but "justice" requires that we look to the past to find out what happened and impose accountability for it.  We don't do that.  We're the United States.  We have too many important matters to attend to.  We only Look to the Future and rise above and beyond such "policy disputes" about the past.

UPDATE II:  The DOJ today announces yet another conviction of an accused Al Qaeda Terrorist in a real court (h/t Adam Serwer):

WASHINGTON—A 35-year-old Minneapolis man was sentenced today in federal court on one count of conspiring to provide material support and resources to al Qaeda.

Warsame, a naturalized Canadian citizen of Somali descent, was charged with one count of conspiracy to provide material support to a foreign terrorist organization—al Qaeda—in a Jan. 20, 2004, indictment returned in the District of Minnesota.

What's so striking isn't merely the willingness of so many people to believe unproven government assertions that a detainee is a "DANGEROUS TERRORIST."  Similarly uncritical is the willingness to believe -- without evidence -- that accused Terrorists  cannot be convicted in a real court and "military commissions" and "preventive detention" powers are therefore necessary.  The statutes criminalizing "material support for terrorism" are breakthakingly broad.  Any Muslim who even sneezes in the direction of a group declared by the U.S. Govenment to be a Terrorist organization can easily be convicted under those statutes.  Those laws have been used to convict people as Terrorists for doing nothing more than broadcasting a Hezbollah TV station in the U.S.

From the case today, not even the DOJ claimed that the convicted Terrorist ever engaged in any violent acts or participated in any actual Terrorist plots.  Instead, he's being sent to prison for 8 years for having attended Al Qaeda camps, having communicated with Al Qaeda, and expressing admiration for and loyalty to Osama bin Laden.  By design, there are few crimes easier to prosecute than "material support" crimes.  Like all government claims, the assertion that "preventive detention," military commissions and other forms of trial-free imprisonments are necessary because the Government cannot obtain convictions against Dangerous Terrorists should be treated with extreme skepticism -- that's especially true given the dangerous powers in service of which that claim is being advanced.

Associated Press, April 30, 2008:  "Prosecutors wanted no contact whatsoever. A Central Intelligence Agency affidavit warned that allowing the contacts could spread information about interrogation techniques used with the high-value detainees, and possibly reveal the location of Camp 7, a facility hidden inside Guantanamo that is reserved for detainees transferred out of secret CIA prisons. "We are talking about the worst of the worst," said John Murphy, a civilian Justice Department prosecutor.

Sydney Morning Herald, April 30, 2008:  "In March last year, David Hicks pleaded guilty to the lesser charge of providing material support to terrorism to get out of Guantanamo Bay. He was sent to jail in Adelaide and was released on December 31. Once described by the Bush Administration as "the worst of the worst", he is now a free man and living a quiet life."