The poison of celebrity

While the ersatz mourning for Michael Jackson was merely annoying, the fame of lightweight Sarah Palin is dangerous 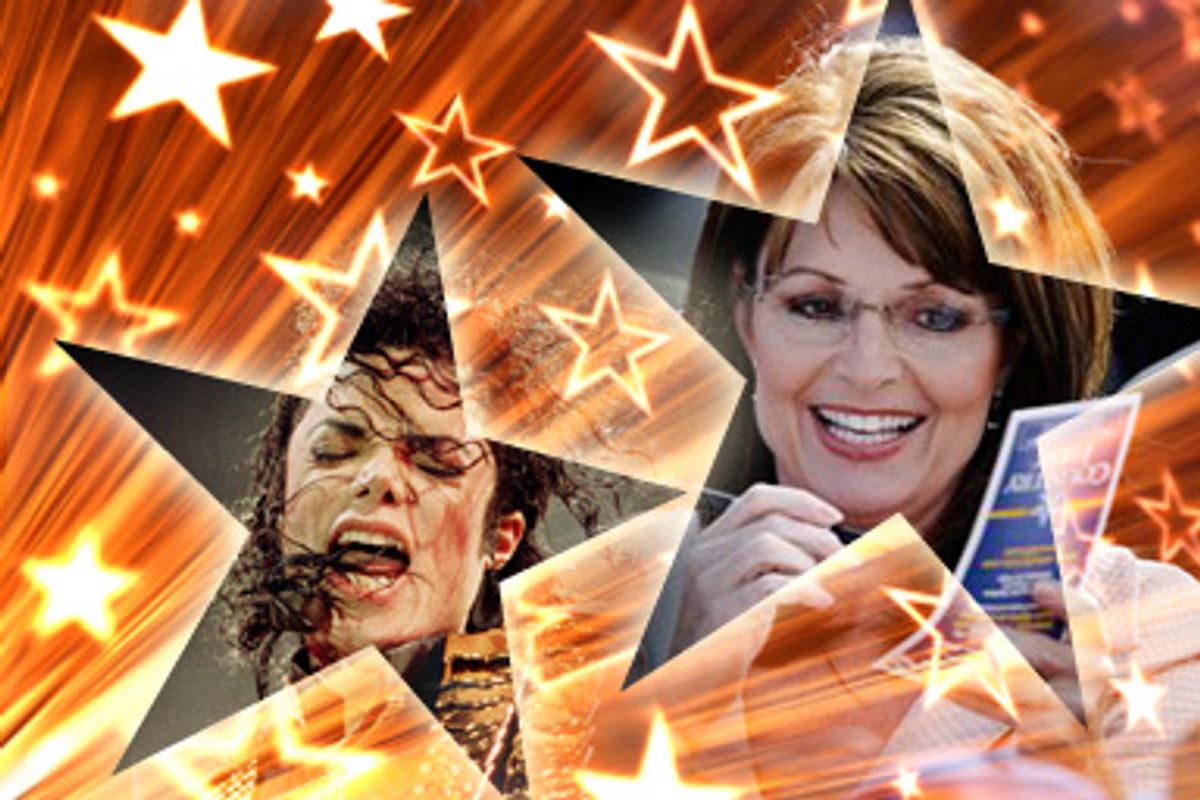 America's celebrity fixation is a fact of modern life. Most of the time it's banal and more or less benign, a fizzy, frothy beverage constantly poured into our national glass, like the giant neon Hamm's Beer mug that would fill all night long next to the elevated freeway in 1960s San Francisco. Plus, it functions as America's cultural glue, the stuff that holds our fractured country together. But our celebrity obsession has an unhealthy side. Its shimmering waves of heat create mirages, and cause actual events to disappear. And when we treat those mirages as if they're real, surreal and even dangerous things can happen.

Take Michael Jackson. His death was a big deal. He was a huge figure in pop culture, one of the best-selling pop artists of all time, who made several albums that are and will remain classics. He was a weird and enigmatic figure whose bizarre personal life inspired gawking on a monumental scale. But above all, his music brought happiness to many millions of people, accompanied so many ecstatic writhings on so many dance floors, that he meant something to several generations of Americans. Like everyone who loved his best music, I was shocked when he died and felt a twinge of genuine sadness.

There is a natural and healthy human instinct to memorialize the dead. And that includes famous people. We may not have known John Lennon or Princess Diana or John F. Kennedy Jr., but we nonetheless feel compelled to mark their passing.

By happenstance, I found myself in a crowded dance club several nights after Jackson's death. The DJ put on "Billie Jean" -- a song that inspired me to get up and move when I first heard it in 1982, and that I've been dancing to ever since. As I started to dance, I tried to summon up some sorrow for Jackson himself. But the sadness was evanescent. It flew instantly and permanently away, chased off by the same joyous bodily abandon his best music always inspired. This sweaty room was his memorial service, and my dance was his eulogy. That was all, and that was enough.

Somewhere, buried in the bloated national extravaganza inspired by Jackson's death, are no doubt such real, modest, heartfelt feelings about him, feelings shared by millions of people. But Jackson was such a strange, enigmatic and problematic man that the only people who can truly mourn him are those who actually knew him, his family and friends -- for everyone else, mourning him is like mourning a billboard. The overriding sense of the hoopla over Jackson is of falseness, the hollowness of emotions blown up far beyond their actual size. We simply don't have an appropriate public mechanism for dealing with the passing of a figure like Jackson. The endless media firestorm and the overblown memorial service created the sense that America was grieving, when all that was really happening was a mass immersion in the tidal wave created when a chunk of celebrity glacier fell into the ocean. Something big had happened, and everyone wanted to get in front of the camera, like those people who stand in the background of interviews, inanely smiling and waving. America was not mourning the death of a human being: It was bowing down before celebrity itself. The whole thing was a gigantic lie, and faintly obscene -- a disservice to the idea of mourning, and ultimately to Jackson, whoever he was.

The national reaction to Jackson's death was false and overblown, but it didn't hurt anyone. Moreover, at least Jackson could boast of actual achievements. But Sarah Palin's bizarre resignation is another story. Watching her self-serving, celebrity-driven implosion, it hit home more than ever just how terrifying it is that this person actually could have become vice-president of the United States.

Palin was the conservative movement's Frankenstein monster. They wanted an attractive, feisty, homespun culture warrior, and Palin could be turned into one. Never mind that she was an unqualified, poorly educated, vindictive lightweight: She appealed to the right-wing base. So they hooked her up to their celebrity-creating machine and set her loose to clank across the American landscape.

As everyone knows, the little experiment conducted by those mad scientists Bill Kristol and John McCain did not turn out well. Palin's resignation is the final result. Her strange story demonstrates the utterly distorting power of fame in America. Carried too high, her wings melted off -- a meltdown evident the moment she took the national stage, and painfully apparent in every tortured sentence of her rambling, illogical resignation speech. In a country not besotted by fame, a politician as intellectually deficient as Palin, whose ambitions are that untethered, and above all who is petulantly unwilling to do the hard, prosaic work of governing, would be ushered permanently offstage. But in a culture of celebrity, the very theatricality of Palin's disgraceful resignation immediately becomes part of her résumé.

It's irritating that we can't get Michael Jackson off our national screen. But it's positively frightening that we have to keep watching Palin.