Dirty jokes, hot witches and a chess game with Death 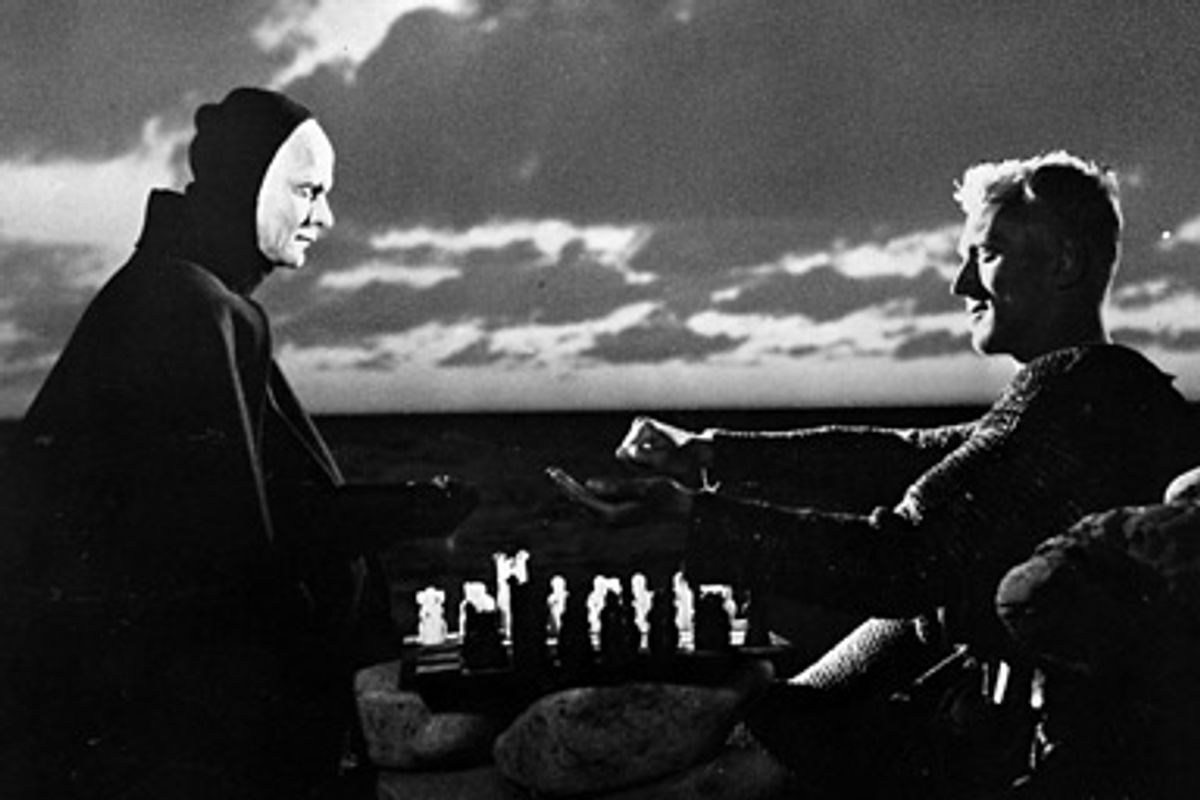 Deep in an audio interview that's half-buried among the extras on the Criterion Collection's new double-disc DVD set of "The Seventh Seal," Max von Sydow drops an odd little film-history bombshell. When Ingmar Bergman contacted him about a role in that 1957 film, von Sydow says, Bergman first suggested that he should play Jof, the lovable clown and family man who survives the Black Death together with his wife and child. How might the entire history of art-house cinema -- and von Sydow's subsequent career playing Nazi officers, tormented intellectuals and Jesus Christ -- have been different?

Ultimately, a boyish comic actor named Nils Poppe took the role of Jof, and von Sydow was reassigned to play Antonius Block, the brooding knight who is returning from the Crusades, alongside his wisecracking, cynical squire (Gunnar Björnstrand, in a performance that may outdo von Sydow's). Tormented by religious doubt and fear, Block plays a memorable game of chess with Death, buying just enough time for Jof's family to escape the latter's clutches. This seemingly insignificant casting detail offers an important clue to "The Seventh Seal," the movie that launched the international art-house movement -- and a movie that has acquired, as a direct result of its iconic stature, a totally unjustified reputation for humorlessness, obscurantism and difficulty.

Faced with an overwhelming glut of classics and art films on the DVD market, and a perennially distracted audience that is largely unfamiliar with anything made before the mid-'70s, Criterion is repackaging many of the most famous titles in its catalog. (Alain Resnais' "Last Year at Marienbad" has been reissued in a similar deluxe edition, and it's also worth a fresh look.) After 52 years it may be that the penumbra of intellectual seriousness around "The Seventh Seal" has finally dissipated, and the endless TV-commercial and greeting-card parodies of its images have faded from memory. If so, it's about goddamn time, because if you simply sit down and watch the movie without prejudice, it's full of surprises.

First of all, from this distance "The Seventh Seal" looks an awful lot like a genre film. To be specific, it's a low-budget 1950s costume drama featuring knights, witches, clowns, sadistic monks, supernatural beings and a handful of cheesy effects. It's got suspense, violence, horror, a cute baby and laughs ranging from sweet-tempered to crude, along with a modicum of philosophical heavy lifting. Sure, it's an unusual genre film in several ways: It's in Swedish, the pace is leisurely (though certainly not sluggish) and the setting meticulous, the cinematography is distinctive and there's a bit more of that philosophical dimension than you'd automatically expect.

There's no doubt that in von Sydow's soul-gnawing character we can detect the idiosyncratic influence of latter-day agnostic or atheistic thinkers like Nietzsche and Kierkegaard. But to yank those elements out of the larger tapestry of the film, as if they explained or justified it -- which is exactly what many of its 1950s viewers did -- reflected a class-based combination of ignorance and bigotry. Difficult as this may be to imagine today, many educated people viewed film as a lowbrow to middlebrow, borderline-disreputable form. For Bergman's work to succeed with that audience, it had to be defined as categorically different from, and superior to, mainstream movies.

Bergman was always a dramatist, and even a showman, before he was an intellectual. He had worked in the commercial Swedish film industry for years before making "The Seventh Seal," and his favorite American filmmaker, as he often said, was the consummate Hollywood craftsman George Cukor ("The Women," "The Philadelphia Story," "Adam's Rib," et al.). Bergman had no international audience at the time he made "The Seventh Seal," and certainly no aspirations of becoming a global artistic avatar. He hoped that the Swedish audience that had enjoyed his earlier romances and comedies would follow him into more personal and adventurous terrain. (It did.) In that sense, "The Seventh Seal" belongs to the same category as "Hamlet" and Joyce's "Ulysses," works intended to engage a broad audience that were taken hostage by a specialist elite.

As Gary Giddins observes in an essay for the Criterion set, critics like the New York Times' Bosley Crowther described "The Seventh Seal" as an "essentially intellectual" work that was prodigiously challenging to the viewer and loaded with mental and moral nutrition. Crowther was doing his damnedest to get his theatergoing, symphony-going Manhattanite readers to check out a film that was set in the Middle Ages and made by an unknown Scandinavian, and I guess it worked.

It would never have occurred to Crowther that such an analysis might drive future generations away from the film en masse, just as it would never have occurred to him to situate "The Seventh Seal," as Giddins does, within the 1950s tradition of apocalyptic or eschatological films: "Kiss Me Deadly," "Godzilla," "The Night of the Hunter," "Invasion of the Body Snatchers." You want dark, brooding allegories on the fate of humanity after the death of God? Start with those.

Furthermore, all the pronouncements about the intellectual and philosophical heft of "The Seventh Seal" have obscured the question of what kind of movie it is, and what it's really about. I imagine that those who haven't seen "The Seventh Seal" envision the chess game with Death as a morbidly serious confrontation, and the closing Dance of Death sequence as a purportedly profound (and probably risible) metaphysical moment.

But the film's Death (Bengt Ekerot) is a drily comic figure, not a skeletal specter but a fully corporeal medieval bureaucrat in a black cape. As Death tells Block, he has "no secrets" and knows nothing about God or the afterlife; he's delighted to relieve the tedium of his rounds with a game of chess. (As the film makes clear, Bergman didn't invent this idea, but drew it from medieval church paintings.) The Dance of Death, in which Death leads Block, his squire and several other characters "into the shadowy country," is another image borrowed from medieval iconography and is seen only by Jof, who is prone to fanciful visions. (Earlier in the film, he sees the Virgin Mary, wearing brilliant blue robes and a golden crown, playing with the Christ Child.)

As Bergman's uncertainty over the casting of von Sydow may suggest, it's not quite clear who the hero of "The Seventh Seal" is. With his Hamlet-like self-torment and his quasi-modernist alienation from everyday life, von Sydow's charismatic Block appealed to many mid-century intellectual viewers. But Jöns, the squire played by Björnstand, is the film's true existentialist man of action, closer to Dirty Harry than to Hamlet, who sets aside pointless metaphysical questions in order to save other people's lives and enjoy what remains of his own. Face to face with Death at the end of the film, Jöns urges Block to get off his knees and stop praying to a God who either isn't there or isn't listening: "Feel the immense triumph of this final moment, when you can still roll your eyes and wiggle your toes."

As he would show over and over again in later films, Bergman was hypnotized by the same questions that hypnotize Block, but that doesn't mean he thinks they are healthy. Block has wasted his life on religious faith and religious doubt, which are depicted as universally destructive. For all his noble mien and wartime experience, Block only becomes heroic in his last days on earth, and only to the extent that he moves past self-indulgent rhetoric and glimpses the sacredness of ordinary life. In helping to save Jof, his beautiful wife, Mia (Bibi Andersson), and their baby -- an intentional echo of the Holy Family -- Block has displayed true Christian morality for the first time, in a world where that faith has become a vicious caricature of itself.

I would go one step further and suggest that Block is only deluding himself that he has saved Jof and Mia, which is a lot better than deluding himself that he is serving God by killing Arabs. The young couple are traveling performers who live by their wits, not the naive innocents Block takes them for. They outrun the Grim Reaper under their own steam, at least for now, and find salvation in another sunny day with their infant son, while the lantern-jawed knight mumbles on his knees in the darkness, awaiting transport to an afterlife he no longer believes in.

If "The Seventh Seal" is a regular movie, designed to thrill us, delight us and frighten us rather than deliver some kind of dour philosophical-religious lecture, it does have something to say about those big abstractions. It's a movie that argues we have to overcome religion and philosophy, or find some way to integrate them into everyday life, to have any chance of leading a fulfilling existence. Not only does Bergman not privilege the life of the mind, he shows us a character so paralyzed by it that he barely notices his physical life until it's almost over.

It's only stretching the truth a little to say that "The Seventh Seal" was meant as a diatribe against the self-exile of bohemian intellectualism and wound up being seen as its apotheosis. Perhaps Bergman and his audiences were likewise seduced by the romance and nobility of von Sydow's character, who refuses to stop asking unanswerable questions and who dies courageously. Living courageously, as Jöns does, would have been better. Predictably, he gets the best exit line. When told to be silent in the presence of the great lord Death, Jöns refuses to be deferential: He will, he admits, but "under protest."