Will the dark political allegory (and ass-kickin' robots) of "District 9" redeem a crap-movie summer? 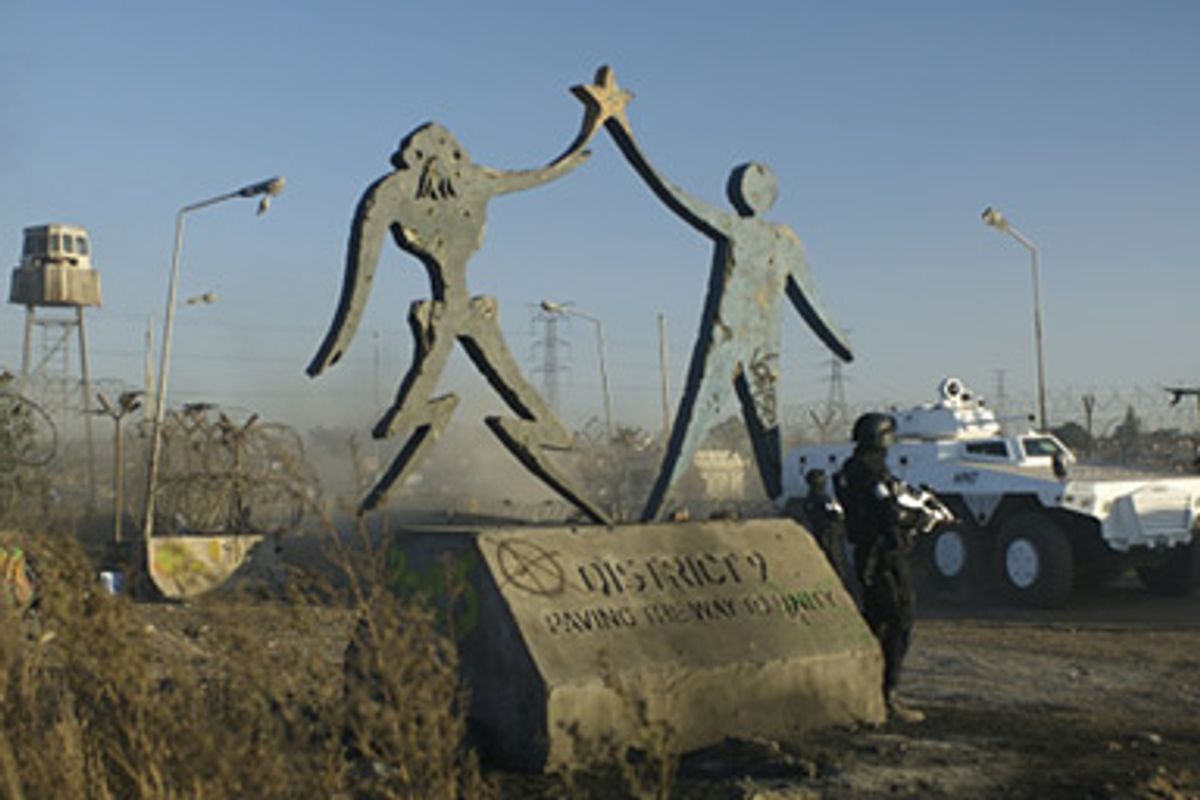 You don't expect much from a sci-fi spectacle flick to be released in August -- traditional dumping ground for lice-infested studio rubbish -- but "District 9," the forthcoming alien-apartheid actioner produced by "Lord of the Rings" godhead Peter Jackson and directed by South African effects wizard Neill Blomkamp, definitely has the Internets abuzz. In large part, of course, that's because most summer cinema is so unbelievably dumb that any marginal sign of life is greeted by fans as a latter-day dispensation of loaves and fishes.

Over at SpoutBlog, Christopher Campbell has a nifty roundup of reactions to the new "District 9" trailer from fan-type bloggers and so-called journalistic professionals alike. My own reaction is that it's impressive how many people devote significant chunks of their lives to jesuitical, reading-the-tea-leaves study of unreleased and probably crappy genre movies -- where, oh where, I plead, are the blogs devoted to parsing the details of Tsai Ming-liang and Béla Tarr's forthcoming films? -- but let's move on.

Actually, my reaction is more like this: "District 9" looks really cool, up to a point. There's an entire tradition of big-screen science fiction that begins with a sinister and/or satirical premise and then degenerates, suddenly or gradually, into standard chase-and-kill. Come to think of it, virtually all sci-fi movies, good or bad, work that way. On the evidence, Blomkamp and Jackson are clearly trying to balance venerable sci-fi allegory -- using the uneasy cohabitation of humans and aliens to comment on human civilization -- and the hiney-kickin' demands of popcorn cinema. In the universe of "District 9," a race of insectoid newcomers (blogger Brian Prisco describes them as a cross between cockroaches and toasters) have been living alongside humans for almost 30 years, but are exiled to walled-in shantytowns, barred from public transport and "human-only" areas and generally treated like, you know, occupied Palestinians or Arabs after 9/11 or Jews under Hitler or blacks under Jim Crow or pick-your-favorite-pariah.

Blomkamp's quasi-documentary framing looks interesting, as do the echoes of recent political history and the paranoid conspiracy theories. I don't feel confident, from the film's trailer, about whether its South African setting and apartheid-era references are cleverly handled or Michael Bay-grade obvious. Ben Child of the Guardian wonders whether "District 9" could turn out to be "a late-era addition to the canon of classic 'Soylent Green'-esque sociological sci-fi," which is quite a mouthful. Owen Williams of Empire sees it as just another summer '09 humans vs. robots throwdown, after the latest installments in the "Terminator" and "Transformers" franchises. Hell, even a halfway smart attempt to split the difference between those two poles -- which is what I smell Jackson and Blomkamp cooking here -- ought to make it the best sci-fi flick of the summer.

Then there's the question of whither Jackson will steer his Sudafrikan protégé next, which might be back to their long-delayed "Halo," a screen adaptation of the fanboy-beloved Microsoft vidgame. If this one clicks, then etc.

I'm developing symptoms of nonexistent-summer-movie overdose here, and need to get back to watching some languorous, out-of-focus flick about bisexual bank robbers, preferably really long and in Albanian (with some stop-motion animation, of course). Oh, but wait! Here's the "District 9" trailer, via Yahoo: