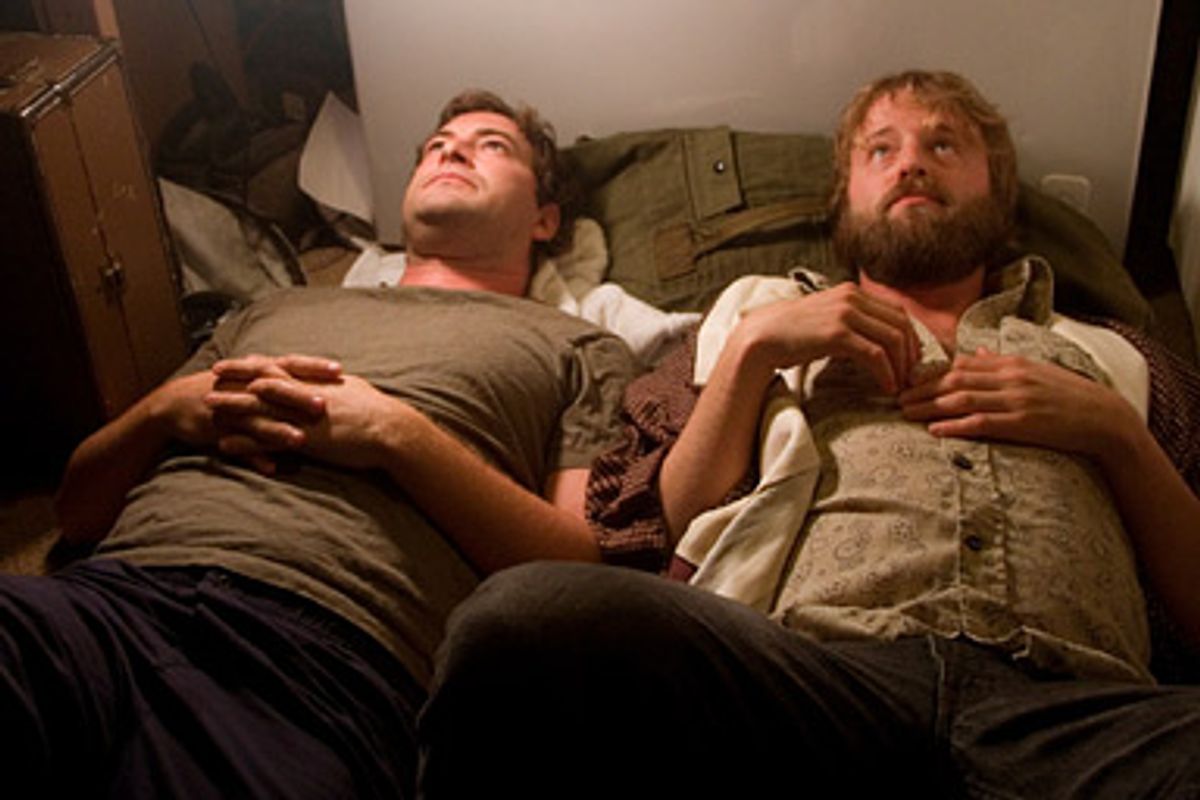 It looks to me as if Seattle filmmaker Lynn Shelton's adroit comedy "Humpday" -- a Sundance hit last winter that's now being released by Magnolia Pictures -- is in some danger of being swallowed by its own premise. On one hand, you couldn't ask for better publicity for a low-budget indie film that was based on improvisation and shot without a screenplay. Some lazy critics will classify "Humpday" as a "mumblecore" movie, but that term never meant much and has now become a pejorative. Nobody wanders aimlessly through this film; Shelton is a sharp and perceptive director and storyteller who suggests Nicole Holofcener or early Mike Leigh.

Now, if "Humpday" isn't a mumblecore movie, it also isn't a movie about homosexuality or bisexuality or any other kind of sexuality. That despite the widely disseminated fact that its protagonists, one-time college hell-raisin' pals Ben (Mark Duplass) and Andrew (Joshua Leonard), who are struggling to reconnect, get really drunk at some hipster chick's house and dare each other to make a porn film. Together. With nobody else in the room. Indeed, Ben and Andrew do end up behind closed doors at the "Bonin' Motel" (Ben's felicitous phrase) with a video camera. But what happens in there is a plot point in a story about two old friends, one a married guy in pleated pants, the other a rootless drifter. It isn't the point of the entire film.

I can't really emphasize this enough: "Humpday" is a smart and subtle comedy that takes on yuppie marriage, the self-congratulatory Seattle hipster subculture, and the difficult passage from post-collegiate dudeliness into manhood. Shelton isn't trying to convince you that all guys want to do their best friends or that everyone's sexuality is inherently fluid, and she isn't selling any other variety of quasi-subversive gender-studies theoretical twaddle. (Some of the film's characters may be asking themselves those kinds of questions, but that's quite another matter.) Those who go to this movie expecting some sex-radical manifesto will be disappointed. Those who skip it, for fear of such a manifesto, will be missing one of the smartest and funniest films of the year, made by an impressive new director.

You can read my original Sundance review of "Humpday" here and read (or hear) my interview with Mark Duplass and Joshua Leonard here. In the interest of pleasing the lazybones constituency, here's an excerpt from that interview.

Actors have this cliché about taking risks in films. I think you guys managed to do that this time.

Mark Duplass: We did take a risk. Not only did we take a risk about what we decided to display of ourselves in the inner and outer realms, but it was a risk whether this movie was going to work at all. I mean, let's face it, just the concept of two straight dudes getting it on -- is that believable in any way? We were all very skeptical, but also very excited, about the fact that we're really going to have to keep this under the microscope the whole time. "Is this real? Is this real?" That was our big question.

Joshua Leonard: Because it was a bit of an experiment, there was always a palpable sense of the possibility that it wouldn't work. There was also a tremendous amount of trust between Mark and Lynn [Shelton] and I, whereby we could critique each other and critique ourselves safely. There was never a moment where any of us walked out of a scene and didn't feel like we had been allowed the latitude to find something that felt very true to us.

J.L.: I hadn't thought about that in those terms but one of the things that was exciting about this movie is the way it was structured. There was no script. We shot from a detailed outline and we shot it all in sequential order, so that the improvisation we were doing would sort of feed into the next shoot. We'd know what we had shot and could build upon it. And the thing that got us all excited was we decided that we would not know what was going to happen in the last scene, and we would not talk about it. We would rent a motel room for the boys, for all-night shooting, and we did. We shot for 12 hours and we would just show up and see what happens. So yeah, I guess there is a bit of a little meta-parallel to draw there.

Not to give anything away, we don't want to do that -- but you literally didn't know what was going to happen when the two guys got, you know ...

M.D.: Just do what those characters would honestly do and just obey that.

I posted something about this film right after the screening and by the next morning there were about 10 e-mails in my box from people whose basic take on it was, "They can't possibly be straight guys if they were able to do this." So you're provoking a reaction, totally sight unseen.

J.L.: Which is the obvious reaction. My first reaction, when Mark e-mailed me about the project, was the most obvious choice -- to go with the latent homosexuality of one of the characters. And it becomes a different movie at that point.

Sure. If one of these guys is about to come out, that's a totally different story.

J.L.: Absolutely. It's a completely different movie. And, I think, a much more overtly political movie. And that was not what this was. You know, this was really about the exploration of a friendship between two guys facing that age, which I think Mark and I can both really relate to. You hit the phase in your life when all of a sudden you're supposed to be an adult. You feel like you haven't done anything and you have to get your life moving, because all of a sudden, you know, you're getting less virile and less attractive to the opposite sex. You have to go out and build and conquer. You've made choices that have galvanized the rest of your life.

Other stuff this week: The mysteriously titled "Lake Tahoe," an international fest-fave from Mexican director Fernando Eimbcke, is set not at the eponymous lake in the California-Nevada mountains but in a remote and rural Mexican town, where a young man's apparently simple quest to get his car fixed turns into a slow-motion, shaggy-dog Odyssean epic. Teenage Juan meets an aging loner with a beloved boxer hound, a young single mom with dreams of punk stardom and a martial-arts obsessive who calls himself "The One Who Knows," all without ever getting the damn car off that telephone pole. A master of long takes and scenes in which nothing obvious happens, Eimbcke seeks to out-Ozu Jim Jarmusch this time around -- and makes his previous feature, the winsome, black-and-white "Duck Season," look like '90s teen comedy. Lovely, brief and supremely enigmatic, "Lake Tahoe" is a surprisingly refreshing experience, especially in a season of infernal cinematic busyness. (Now playing at Anthology Film Archives in New York. Opens July 24 in San Francisco and Seattle, with other cities and DVD release to follow.)

Russian director Karen Shakhnazarov's delightful domestic hit "The Vanished Empire" recaptures the lost world of mid-'70s Soviet youth culture, at a moment when the so-called people's state was at the peak of its powers and international reach -- but also on the verge of catastrophic collapse. The romantic triangle, sexual discovery and pop-culture background encountered by childhood pals Sergey and Styopa (and the alluring Lyuda) are familiar elements made new by the setting, a strange alternate universe of fading socialist ideology, jaded innocence and imitation Western pop. (Now playing at the Quad Cinema in New York, with other cities and DVD release to follow.)

Beyond The Multiplex Lgbt Movies Pornography