Sonia at the bat 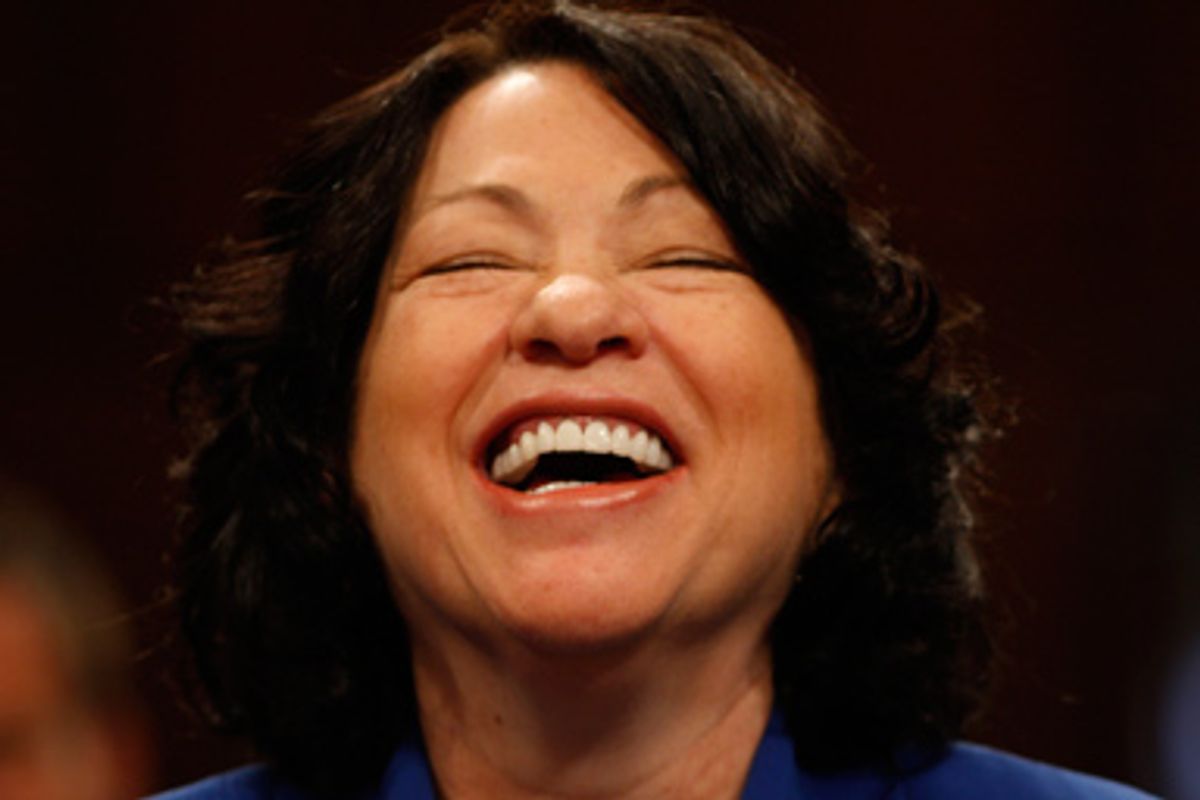 After a few hours of Monday's hearing on Sonia Sotomayor's nomination to the Supreme Court, it was pretty clear that if the Senate Judiciary Committee truly had its way, the nominee herself would never have been permitted to speak.

The "opening statements" by the 19 members of the committee began at 10 a.m. sharp and dragged on -- albeit interrupted by a few anti-choice kooks and a lengthy break for lunch -- until 2:30 p.m. Each lawmaker used the same tired baseball metaphor, droning back and forth about whether judges are more or less like umpires, calling balls and strikes. (Sen. John Cornyn, a Texas Republican, tried to change things up by talking about quarterbacks, but it didn't take.) At various moments, senators read Sotomayor her own résumé, reminisced about previous nominees and lamented the fact that Supreme Court hearings aren't televised. One member, Sen. Chuck Schumer of New York, agreed to cut his remarks short; this act of mercy might have seemed big-hearted, except that Schumer later materialized at the witness table to "introduce" Sotomayor to his colleagues -- who had just spent five hours talking about her -- and took up another five minutes in the process. By the time Sotomayor actually had a chance to say anything remotely substantive, she'd been sitting at the table, smiling faintly, so long that it might have violated the Supreme Court's own rulings against indefinite detention.

So the best measure of Sotomayor's qualification for the job may well be that she managed to keep her own opening remarks under seven minutes long. "In the past month, many senators have asked me about my judicial philosophy," she told the panel. "It is simple: fidelity to the law." Sure, it was a lengthy buildup for not much payoff. But then again, Sotomayor surely knows -- as did everyone else in the Hart Senate Office Building Monday -- that she's virtually guaranteed of being confirmed once all is said and done, no matter what transpires this week. And at least on the first day of the hearings, her best move toward becoming the first Latina on the Supreme Court was simple: just stay out of the way and let the Senate blab on for as long as it wanted to.

Only one Republican actually acknowledged that reality, though. "Now, unless you have a complete meltdown, you're going to get confirmed," Sen. Lindsey Graham, of South Carolina, told Sotomayor. Graham, who worked harder than almost anyone else in the GOP on John McCain's behalf last year, was the only member of his party who seemed capable of remembering how the elections went in November. "We lost, and President Obama won," Graham said, to the dismay of conservative bloggers watching the hearings. "And that ought to matter. It does to me."

As for the other Republicans, they often seemed to have been teleported back to the 1990s culture wars. "We will inquire into how your philosophy ... affects your decision-making, like, for example, in abortion, where an organization of which you were an active leader argued that the Constitution requires taxpayer money to fund abortions; and gun control, where you recently noted it is settled law that the Second Amendment does not prevent a city or state from barring gun ownership," said Sen. Jeff Sessions, of Alabama, the ranking Republican on the committee, who was surprisingly aggressive in his opening remarks. Tom Coburn, of Oklahoma, read Sotomayor the oath of office she'll take once the confirmation show is over. "It doesn't reference foreign law anywhere," he said pointedly. "It doesn't reference whether or not we lose influence in the international community. We lost influence when we became a country in the international community to several countries, but the fact that did not impede us from establishing this great republic." What he meant by the last bit wasn't entirely clear, but whatever it was, Sotomayor would obviously do well to take it under advisement before Coburn has the chance to question her on Tuesday.

For the most part, the picture Republicans painted of Sotomayor -- as a gender- and race-driven liberal activist, coming to take your guns and force your daughters to have abortions -- didn't seem likely to resonate with a public polls show support her confirmation. Sessions steered away, slightly, from the overheated "she's a racist!" rhetoric that greeted Sotomayor's nomination in May. But the GOP's attempt at demonstrating to Latino voters -- the largest, and fastest-growing, minority bloc in the nation -- that their opposition to her nomination had nothing to do with race was often a little clumsy. "I would hope that every American is proud that a Hispanic woman has been nominated to sit on the Supreme Court," said Jon Kyl, of Arizona, the third-ranking Republican in the Senate. "In fulfilling our advise and consent role, of course, we must evaluate Judge Sotomayor's fitness to serve on the merits, not on the basis of her ethnicity." Several GOP senators brought up conservative Miguel Estrada, a Honduran immigrant whose nomination to a federal appeals court by then-President George W. Bush was blocked six years ago. The point was to say Republicans would vote for Latino judges, but the effect was a little condescending at times.

Not that Democrats avoided rhetorical excess themselves. Chairman Patrick Leahy, of Vermont, kicked the hearing off by running through other "first" nominations to the high court -- and noting some of the objections at the time, as if the people who oppose Sotomayor now were the same people who Leahy noted were wondering, when Louis Brandeis was nominated to become the first Jewish justice, "about the Jewish mind and how its operations are complicated by altruism." Dianne Feinstein of California was the first of the speakers to recite Sotomayor's career accomplishments back at her, which she did, weirdly, in second person. That may have been what finally prompted the antiabortion protesters to start yelling in nonsensical Spanglish about their cause ("Abortion es asesinada!"). But other Democrats did push back against the notion that Sotomayor somehow represents a radical branch of judicial activism. "It seems that their definition of an activist judge is one who votes differently than they would like," said the newest member of the committee, Sen. Al Franken of Minnesota, though he spoiled an otherwise impressive debut by spending the first half of his speech talking about, well, Sen. Al Franken of Minnesota, instead of Sotomayor.

That may have just shown Franken to be a quick study, though; his colleagues had already made it clear that Monday was all about them. The proceedings should get a little livelier on Tuesday, when Sotomayor will have to begin answering questions from supporters and opponents alike. Later in the week, a parade of witnesses will tell the committee all about why what they heard from Sotomayor should persuade them how to vote. And finally, sometime later this summer, everyone will vote either for or against her, most likely doing exactly what anyone who watched a few minutes of Monday's session could have predicted they would do. It's a tough job, advising and consenting. But somebody's got to do it.