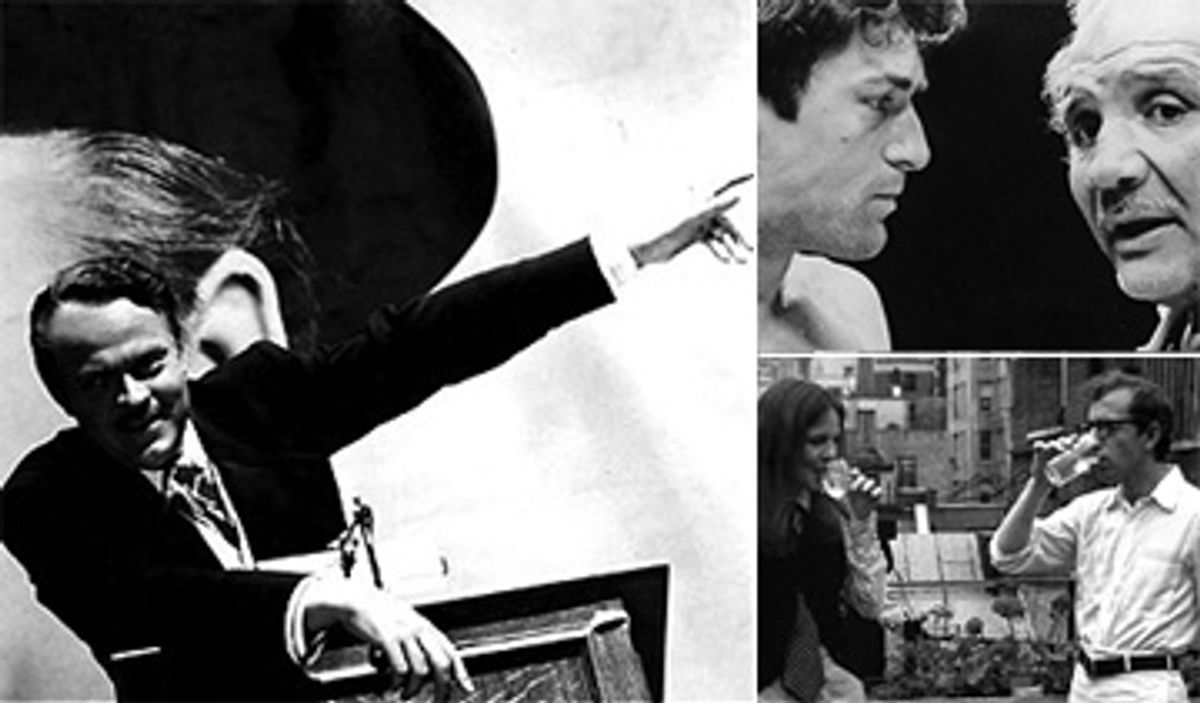 Lists of the best films ever always tell you a lot more about the people compiling them, and about the state of critical thinking at a given moment, than they tell you about the movies in question. But who can resist? Iain Stott of the One-Line Review just completed his 2009 poll of 187 critics, filmmakers, bloggers and other cinephiles, and the results make fascinating reading. (I was invited to contribute, but never got around to it.)

Stott's results are overwhelmingly skewed toward American movies, which presumably reflects the tastes and inclinations of his polling universe, but surprises me more than a little. Nine of the list's top 10 films are in English and eight are American-made. The one foreign-language film is "The Seven Samurai," which also strikes me as an American-inflected choice. It's a terrific movie, no doubt. But I'm not sure how many Japanese cinema buffs would even consider it Kurosawa's best, let alone the best film in their nation's history. Alfred Hitchcock and Stanley Kubrick get 40 percent of the top 10 between them, while Bergman, Fellini, Renoir, Truffaut, Antonioni and Godard -- along with every other foreign-language filmmaker besides Kurosawa -- are shut out. (Of those name-brand directors, only Bergman gets a film in the top 20, with "Persona" at No. 15.)

It's entertaining to kvetch about the list's oddities: "2001: A Space Odyssey" at No. 3? Really? "Annie Hall" as the 28th greatest film of all time, ahead of "Raging Bull," "The Passion of Joan of Arc," "Grand Illusion" and "The 400 Blows"? Woody Allen himself wouldn't dare to suggest that. Figuring out how to understand these things, though, is more complicated. This list actually has more flexibility and idiosyncrasy than most such efforts, with a higher proportion of comedies and genre films. (It isn't just foreign directors who get shafted, by the way. There are four Billy Wilder movies on the list, double the combined total for Fellini, John Ford and Howard Hawks.) In the bigger picture, over the last 20 years the tastes of critics and film buffs seem to have ossified around a central canon of classics that may shift position but don't change much. There are only four films on this entire list made since 1980, and only one made after 1990.

That one is "Pulp Fiction" at No. 20, which has become an immediate target of bloggers and commenters. I'm not sure I object. Arguing about whether Tarantino's neo-psychedelic gangster gabfest is better than, say, "City Lights" or "The Bicycle Thief" (both below it on the list) is a bit like asking whether cocaine is better than asparagus. But as an immense cultural influence, a symbol of its era and an enormous popular and critical success, "Pulp Fiction" may have earned its slot. At least the people who voted for "Pulp Fiction" have actually seen it, enjoyed it and can halfway remember it; I'm less certain that is true of F.W. Murnau's 1927 silent "Sunrise" (No. 18) or the Marx Brothers' 1933 "Duck Soup" (No. 33).

Maybe it's just too early for more recent films to have percolated into the collective consciousness of the intelligentsia, but the disparity between a poll like Stott's and IMDb's user-generated Top 250 is instructive. There are 19 films on the Stott list that also appear in the IMDb top 50, which is a fairly robust degree of correlation. But six of IMDb's top 10 (including "The Shawshank Redemption" at No. 1), and 12 of its top 20, don't appear anywhere on the One-Line Review list. Unsurprisingly, these non-overlapping films tend to be recent popular hits; eight of the IMDb top 20 were made since 1990, and four of them since 2000. At least "The Dark Knight," which had an extended run in the top spot, has drifted back into the pack and now sits at No. 7.

Herewith, Stott's entire list. (I just copied it over, so blame him for the inconsistent rendering of foreign-language titles.) I'm totally OK with the conventional No. 1 choice, although I think "Vertigo" is several notches too high at No. 2. My top unforgivable omission would be Bergman's "Smiles of a Summer Night," while the doesn't-belong-here prize goes to Wilder's "The Apartment." (A nifty little period sitcom, but give me a break.) In the pleasant-surprise category, I'm going with Joseph L. Mankiewicz's "All About Eve," a witty, electrified American masterpiece that's been unjustly dissed over the years by male critics and feminists alike. Your observations, please.