"Harry Potter and the Half-Blood Prince"

The sixth film in J.K. Rowling's series has beautiful special effects, and something even more rare: Magic 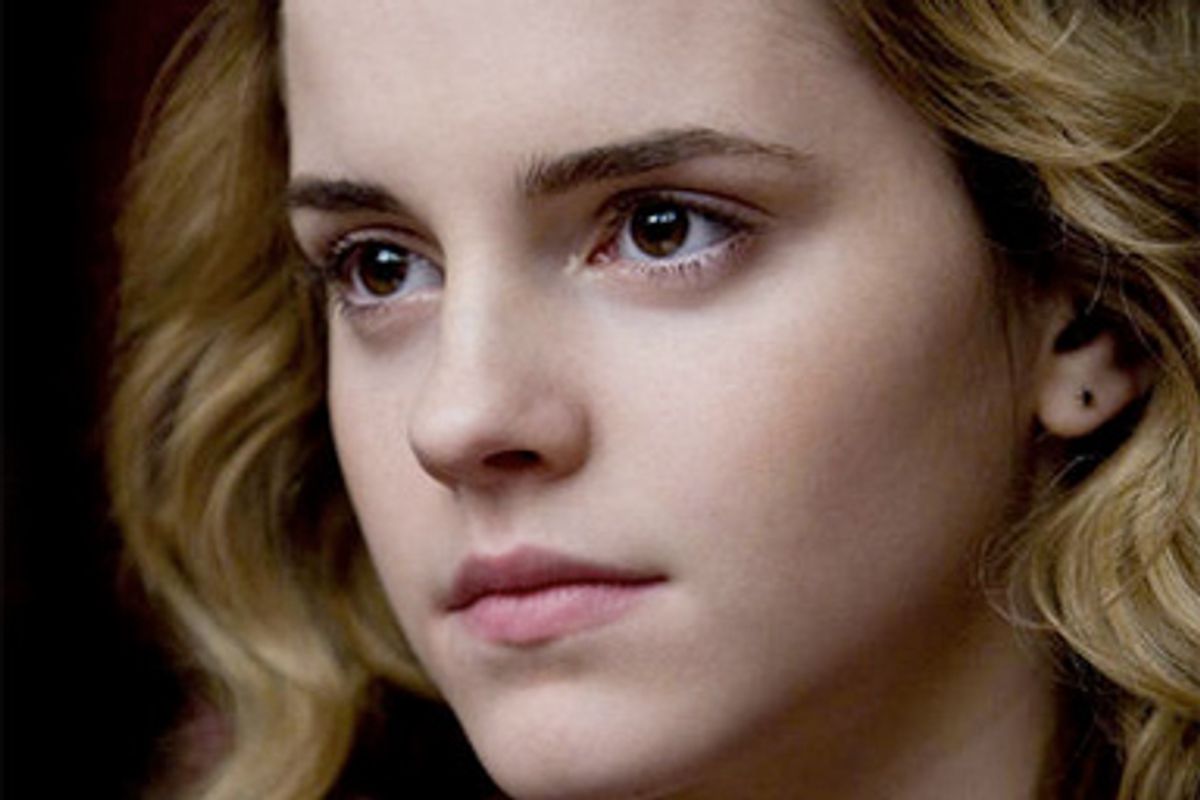 Every summer we're reminded of Hollywood's maniacal drive to give us increasingly bigger, allegedly better special effects. But "Harry Potter and the Half-Blood Prince" -- the sixth installment in the series of movies based on J.K. Rowling's roaringly popular novels -- suggests a less flashy and far more rewarding strategy: What we really need aren't bigger special effects but more magical ones -- and having a story worth telling should always be the foundation. The effects in "Harry Potter and the Half-Blood Prince" are so believable they seem more naturalistic than special; they're situated so perfectly in their imagined universe that we have no trouble believing in their authenticity. The brass owl decorating the podium in Hogwarts' dining hall moves and preens until Dumbledore steps forward to speak, at which point it spreads its wings and respectfully freezes into position; when Hermione (Emma Watson) reshelves books in the library, they swoop out of her hands and find their appropriate places on even the highest of shelves; a quidditch match takes place during a snowfall, a believable, velvety backdrop for the players as they dip and swirl through the air on their broomsticks. In "Harry Potter and the Half-Blood Prince," magic happens as the characters are busy doing other things -- playing sports, falling in love, nursing broken hearts. And while this is, of course, a fantasy movie, the quiet and potent idea nestled inside it is that there's magic in and around the things of everyday life.

With "Harry Potter and the Half-Blood Prince" -- which, like the first four "Harry Potter" movies, was adapted by Steve Kloves, who is also at work on "Deathly Hallows" -- Yates has become even more sure-footed. He's better at framing and connecting the movie's big, dramatic sequences (including a near-perilous journey Harry takes with Michael Gambon's Dumbledore, in which the former is set upon by an army of terrifying water-dwelling zombies), while he's as skillful as ever at shaping the story's quieter moments into moving, vital miniatures. "The Half-Blood Prince" -- with the help of Bruno Delbonnel's cautiously majestic cinematography and Stuart Craig's reliably gorgeous production design -- is a beautifully paced feat of filmmaking, one that navigates potentially choppy shifts in scale with grace and ease.

The movie opens just as a trio of Death Eaters descend upon the Muggle world in London, swooping down -- clearly at the behest of their boss, Lord Voldemort -- to destroy the Millennium Bridge. Harry is just finishing up his summer vacation, chatting up an extremely cute girl at a modest cafe, when Dumbledore pops onto the scene. (He makes his appearance in front of an Underground advertisement for a brand of perfume; the words "Divine Magic" stretch behind him like an introductory banner.) It has become increasingly clear that something really, really bad is going to happen at Hogwarts, something that will affect the whole world, and it's Harry's responsibility to stop it, with Dumbledore as his guide. Then there's that other business of actually growing up, which is also fraught with dangerous hiccups. Harry does have the help of his best friends, Hermione Granger and Ron Weasley, but they have troubles of their own: Hermione is in love with Ron, but he doesn't know it; Ron has become a quidditch star and, as such, has attracted the fawning attention of a dippy classmate, Lavender Brown (Jessie Cave). Meanwhile, Harry and Ginny Weasley (played by the suitably composed and serene Bonnie Wright) circle each other warily: Harry clearly has a crush on her, but she's dating someone else, and Ron's hovering protectiveness doesn't help, either.

In "The Half-Blood Prince" there are obvious villains (like Bellatrix Lestrange, played by crazy-eyed, pint-sized Helena Bonham Carter), possibly ambiguous villains (like Alan Rickman's stately, creepy, sexy Severus Snape and Tom Felton's Draco Malfoy, who's grown into a tall, sneering blond straight out of Duran Duran) and random figures who are essentially decent but who haven't always taken the right path (like Potions professor Horace Slughorn, played by Jim Broadbent, an affable tippler who "collects" star students so he can drop their names later). There's also the usual assortment of classmates, including one of my personal favorites, the flaxen-haired space case Luna Lovegood (Evanna Lynch), who drifts through the movie like a pale Victorian ghostie. (She has a fine moment in which she appears, as if out of nowhere, in a lion headdress, ready to cheer the Gryffindor House quidditch team to victory.)

Rowling's Harry Potter novels begin as children's books and gracefully evolve into young-adult fiction, and it's in "The Half-Blood Prince" that the suffering and frustration of adolescence really begin to emerge with great clarity. Yates contrasts those small moments of terror with bigger ones: One of the most unnerving sequences features an image borrowed directly from J-horror. But Yates is attuned to all kinds of emotional pain, and his youthful actors -- who have become both stronger and more relaxed as performers with each successive movie -- are right in step with him. In one scene, Hermione suffers as she watches Ron willingly cuddle up to Lavender. She's conjured a circle of swirling little birds -- as she tells Harry, in whom she tentatively confides her heartbreak, they're the result of a charm spell she's practicing. When Ron clumsily fails to grasp that he's hurt her, she sends the birds hurtling toward his head -- they narrowly miss his head and shatter in a mist of feathers on the wall behind him, tiny, floating remnants of her fury and pain. Yates also guides his actors through a scene of astonishing erotic beauty, an encounter between two characters that's more tender than it is overly sexualized. The moment takes place amid a jumble of old, magical artifacts: Romantic love, as an idea, may technically be very old, but it's the young who keep it new by continually breathing life into it.

Yates handles the movie's most devastating scene -- a moment of swift but incalculable loss -- so deftly that you almost can't believe the unthinkable is actually happening. "The Half-Blood Prince" is partly a story about the old ceding the world to the young, even before the young are ready for it. At one point Gambon's Dumbledore summons Harry to his chambers, needing to speak to him about some very serious business. But first, he cautiously mentions that he's noticed how much time Harry spends with Hermione. Are the two of them, perhaps ...? Dumbledore doesn't even have to finish the question. Gambon plays the moment with a wonderful, shy delicacy.

Harry tells him that he and Hermione are just friends, but the idea is clear. Dumbledore wants Harry to find love -- to find all the things that might give him pleasure in life, in addition to all the heavy-duty responsibilities he's already carrying. One of the pleasures of watching the emerging mosaic of the "Harry Potter" movies has been seeing how each director puts his own stamp on the source material: Alfonso Cuarón gave us a brooding, beautiful "Harry Potter and the Prisoner of Azkaban"; Mike Newell's "Harry Potter and the Goblet of Fire" was more pastoral but hardly comforting.

By the series' completion, Yates will have directed half of the "Harry Potter" movies, and that mutes the surprise element a bit. But "Harry Potter and the Half-Blood Prince" at least ensures that the franchise's remaining movies are in good hands. Yates understands the bond, and the continuity, that's so essential between the old and the young. In one of the movie's loveliest scenes, Broadbent's professor Slughorn, slightly sozzled, describes to Harry a piece of magic worked by one of his former students. He describes this wonderful, delicate feat so vividly that his words are more effective than visuals would be. And, as it turns out, this bit of magic had been worked by Harry's long-dead mother, Lily. It was, Slughorn tells Harry, peering at him as if through mist, "the most beautiful magic." That's a measure of how subtle a spectacle Yates has given us with "Harry Potter and the Half-Blood Prince." The most beautiful magic in it is left unseen. And still, it emerges with absolute clarity.