The giant banks amass too much clout and market heft 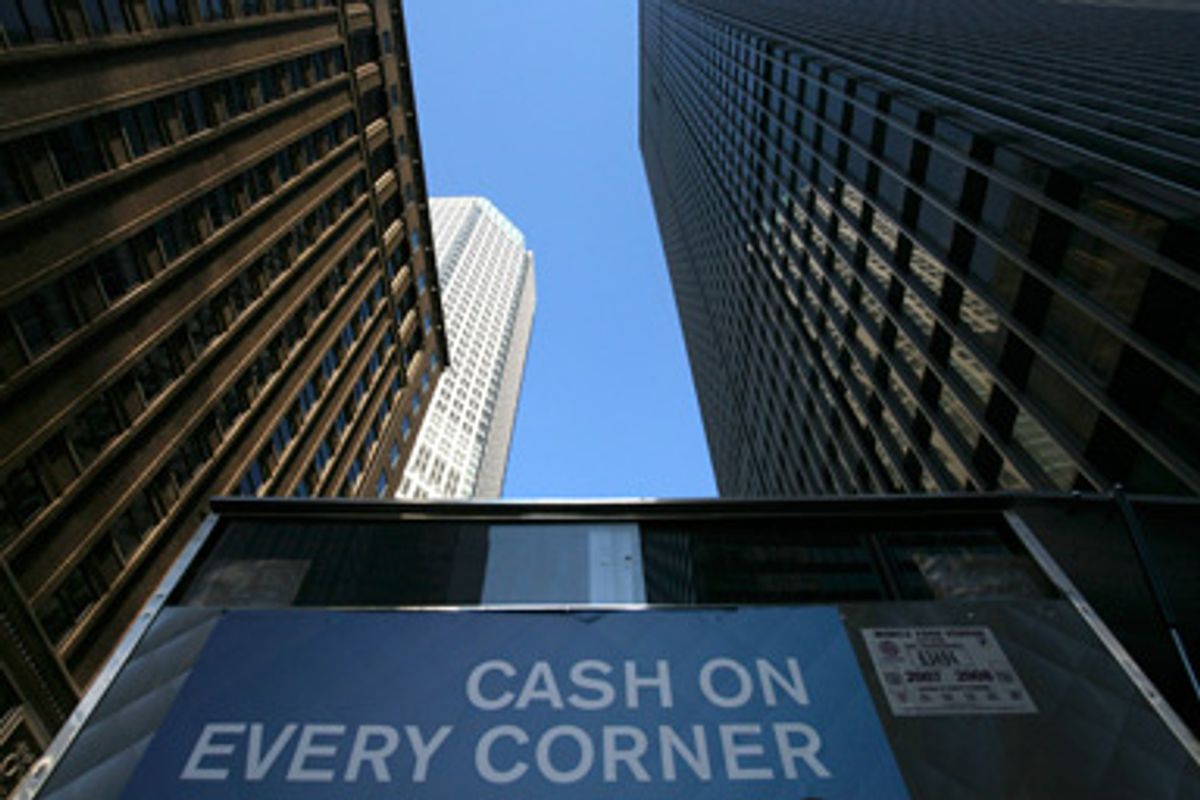 Besides Goldman Sachs, the Street's other surviving behemoth is JPMorgan. On Thursday, it posted second-quarter earnings up a stunning 36 percent from the first quarter, to $2.7 billion.

The resurgence of JPMorgan and Goldman Sachs gives both banks more financial clout than any other players on the Street -- allowing both firms to lure talent from everywhere else on the Street with multimillion pay packages, giving both firms enough economic power to charge clients whopping fees, and bestowing on both firms even more political heft in Washington.

Where are the antitrusters when we need them? Alternatively, why isn't the government charging Goldman and JPMorgan a large insurance fee for classifying both firms as "too big to fail" and therefore automatically bailed out if the risks they take turn sour? Instead, we've ended up with two giants that now have most of the casino to themselves, are playing with poker chips backed by taxpayers, and have a big say in what the rules of the game are to be.

When JP Morgan repaid its federal bailout of $25 billion last month it was, like Goldman, freed from stricter government oversight. The freedom has also allowed JP, like Goldman, to take tougher and more vocal stands in Washington against proposed financial regulations they dislike.

JP is mounting a furious lobbying campaign against regulations that would funnel derivatives trading through exchanges where regulators can monitor them, and thereby crimp JP's profits. Now the Street's biggest derivatives player, JP has generated billions helping clients navigate these contracts and assuming counter-party risk in such transactions. Its derivatives contracts were valued at roughly $81 trillion at the end of the first quarter, representing 40 percent of the derivatives held by all banks, according to the Office of the Comptroller of the Currency. JP has played down its potential risk exposure from these derivatives contracts, of course, but anyone who's been paying attention over the last 10 months knows that unregulated derivatives have been at the center of the storm.

The tumult on the Street has also given both firms extraordinary market power. That's where much of the current profits are coming from. JP used the crisis to snap up Bear Stearns in March and Washington Mutual last fall, with the amiable assistance of the Treasury. The deals have boosted JP's dominance in retail banking and prime brokerage, enabling it to charge its corporate clients heftier fees for lending and other financial services, and to corner more of the market in fixed-income and equities. JP also bolstered its earnings by helping other financial companies raise capital following the stress test results in May.

Antitrust law was designed to prevent just this sort of market power and political heft. The Justice Department or the Federal Trade Commission should investigate the newfound dominance of Goldman and JP -- and, if warranted, break them up. Alternatively, Congress should impose a surtax on the newly exclusive group of Wall Street firms, most notably Goldman and JPMorgan, which are now backed by implicit government bailout insurance guaranteeing that, should they get into trouble, taxpayers will keep them afloat. The surtax would approximate the economic benefit to these firms of such government largesse, which I'd estimate to be at least 50 percent of their profits from here on.