The legendary CBS News anchorman was 92 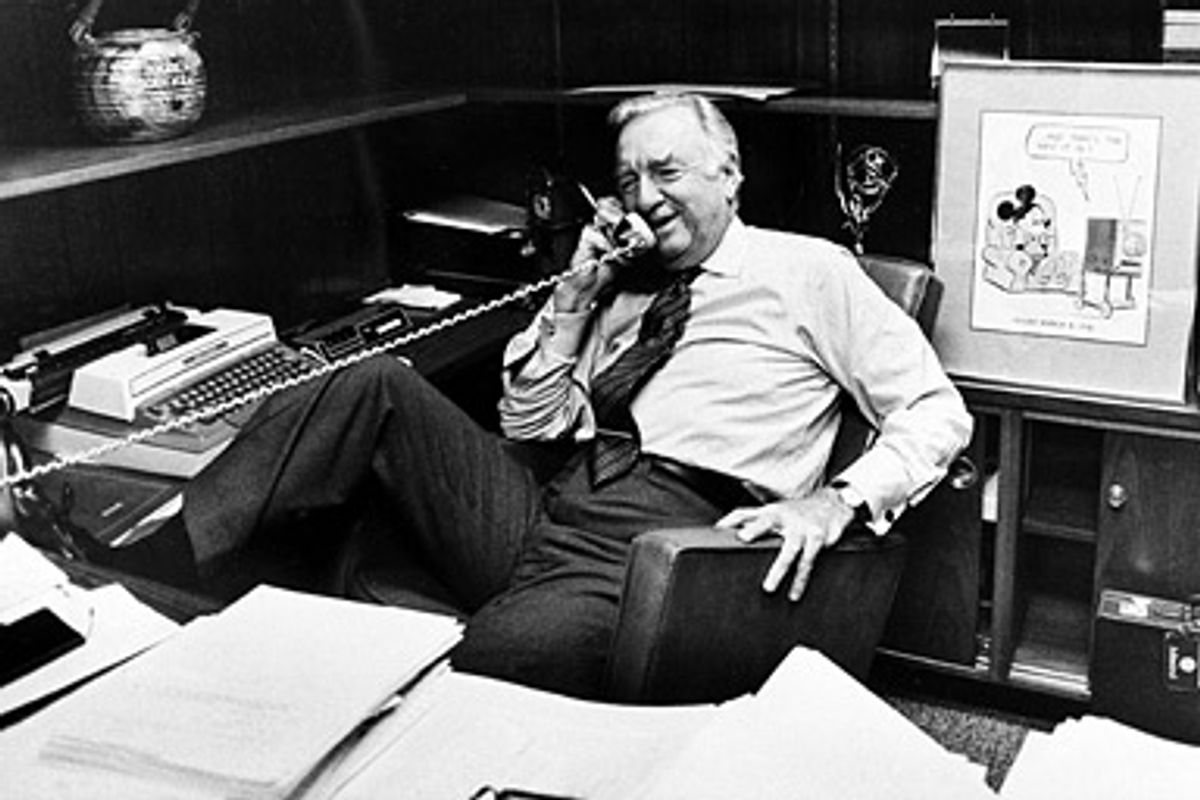 In this March 6, 1981 file photo, Walter Cronkite talks on the phone at his office, prior to his final newscast as CBS anchorman in New York City. Famed CBS News anchor Walter Cronkite, known as the 'most trusted man in America' has died, Friday, July 17, 2009. He was 92.

Cronkite anchored the CBS evening news from 1962 to 1981, leading the network's coverage of the civil rights movement, John F. Kennedy's assassination, the Vietnam War and Watergate. He had been ill with cardiovascular disease for some time, and was being cared for at Bellevue Hospital in New York since last month. CBS said his family was with him when he died.

“It is impossible to imagine CBS News, journalism or indeed America without Walter Cronkite,” Sean McManus, the president of CBS News, said in a statement the New York Times posted. “More than just the best and most trusted anchor in history, he guided America through our crises, tragedies and also our victories and greatest moments.”

Cronkite started in journalism with a part-time job at the Houston Post, and he dropped out of college to work there full-time. He wound up moving to United Press International, and covered World War II for the wire service. He joined CBS in 1950, in the early days of national television.

Not long after he took over as anchor for the network's primetime newscast, CBS expanded the show from 15 minutes to 30, and his audience grew steadily. By 1968, when Cronkite returned from a reporting trip to Vietnam, his verdict on the situation there helped convince President Lyndon Johnson that he'd lost a crucial swath of public -- and establishment -- support. "It seems now more certain than ever that the bloody experience of Vietnam is a stalemate," Cronkite said, on the air. "If I've lost Cronkite, I've lost America," Johnson reportedly said, and decided not long afterwards not to seek reelection.

Cronkite retired in 1981, at 65, to let Dan Rather take over. But in 2006, when Katie Couric became the anchor of the evening newscast, the network began using a recorded announcement by Cronkite to open the show.

UPDATE: The White House issued a short statement from President Obama a little while after the news of Cronkite's death broke:

For decades, Walter Cronkite was the most trusted voice in America. His rich baritone reached millions of living rooms every night, and in an industry of icons, Walter set the standard by which all others have been judged.

He was there through wars and riots, marches and milestones, calmly telling us what we needed to know. And through it all, he never lost the integrity he gained growing up in the heartland.

But Walter was always more than just an anchor. He was someone we could trust to guide us through the most important issues of the day; a voice of certainty in an uncertain world. He was family. He invited us to believe in him, and he never let us down. This country has lost an icon and a dear friend, and he will be truly missed.

And that's the way it is.