Notes from a California meltdown, the college edition 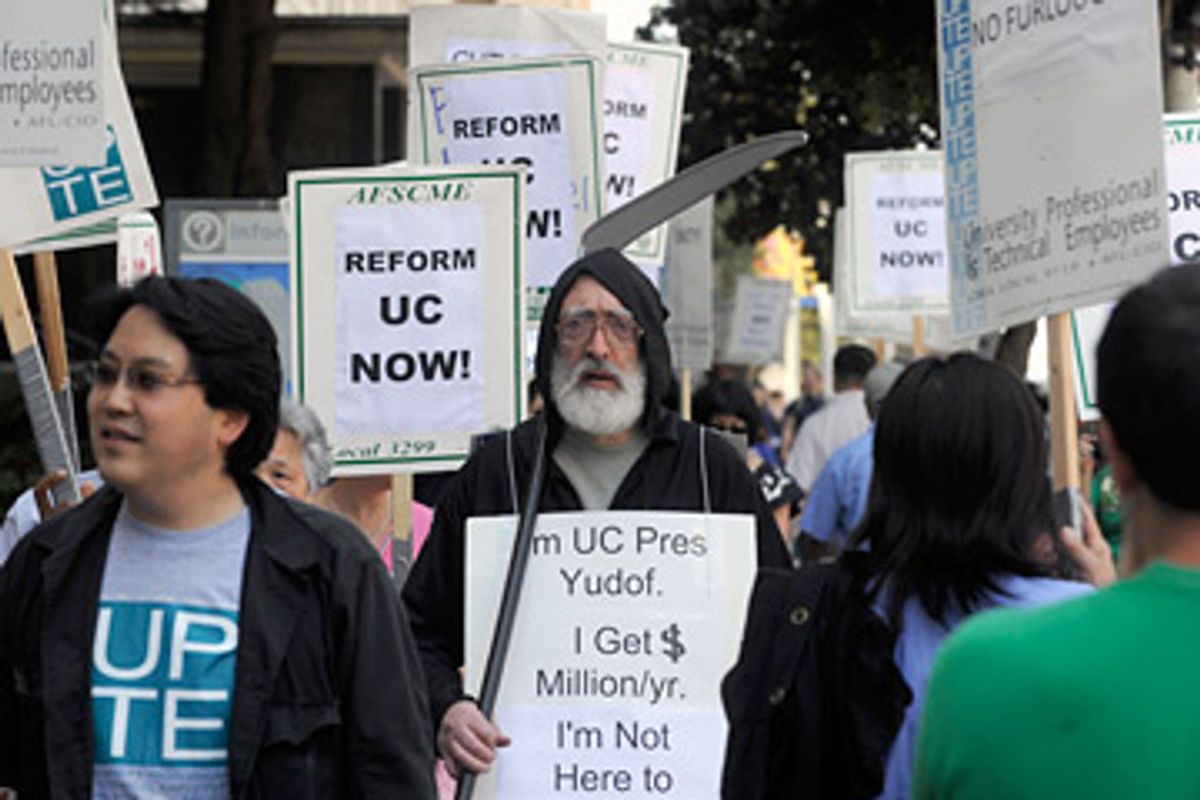 Rumors of a state budget deal in California, perhaps as soon as today, are percolating out of Sacramento. But no matter what happens, the students who attend campuses in the California State University system, currently protesting a proposed 20 percent fee hike, are unlikely to be assuaged. Higher education in California is getting hammered.

The 20 percent fee hike, which CSU trustees will vote on Tuesday, is in addition to a 10 percent hike passed in May. CSU trustees, expecting big cuts in state funding when the new deal finally comes through, are trying to slice $584 million from their budget. And they're not alone: Student fees are also rising quickly in the University of California system, and at community colleges. Even within the systems, the sharks are beginning to feed on each other. Faculty at self-described elite U.C. campuses are arguing that cuts should be focused on the non-elite institutions. Sorry U.C. Merced!

Even worse, all state employees, including faculty, are facing mandatory furloughs and salary freezes. So students will be paying higher fees for less education while the best teachers flee for green pastures.

It's a disaster, but not a new story. According to the San Jose Mercury News: "In 1980, 17 percent of the state budget went to higher education. By 2007, that had fallen to 10 percent -- the same as prisons and parole."

It's also not an only-in-California story. California dominates the headlines because of its sheer economic size and the bizarre dysfunctions in how it governs itself. But as the New York Times reported on Monday, citing a new report from the Rockefeller Institute, state tax revenue is in free fall all over the United States. And so is state support for public higher education. Pick a state, any state: Michigan; Pennsylvania; Ohio; Virginia.

Over all, the report found that state tax collections dropped 11.7 percent in the first three months of 2009, compared with the same period last year. After adjusting for inflation, new changes in tax rates and other anomalies, the report found that tax revenues had declined in 47 of the 50 states in the quarter...

As bad as the first quarter was, the second quarter is shaping up to be even worse, the report said. Preliminary data for the first two months of the quarter, April and May, collected from 45 states, indicated that tax revenues declined by 20 percent compared with the same period last year.

A report from the Federal Reserve Bank of San Francisco (found via Mark Thoma at Economist's View) notes that state revenue shortfalls are typical during recessions, but that the current crisis is exceptionally bad by historical standards. And the likely slow pace of any recovery means the budget cuts won't end this year.

The gradual nature of the recovery will put additional pressure on state and local budgets. Following a difficult 2009, especially in the West, most states began the 2010 fiscal year on July 1 with even larger budget gaps to solve.

...[S]tate governments face far larger problems than usual since all of their major sources of revenue (income, sales, and property taxes) have been disrupted. The federal fiscal stimulus payments to states should help stave off even worse difficulties, but the states likely will face constrained budgets for years to come.

California faces the largest problems of all because ever since the passage of Proposition 13, the state is far more dependent on volatile income and sales tax revenue for its budget needs than on relatively stable property taxes. So when the business cycle goes bust, California's roller coaster accelerates faster than everyone else's.

But this is not just California's problem. And if increasing access to quality higher education is a cornerstone of future economic growth, as most economists believe, and President Obama pledges adherence to it, then maybe a second stimulus really is required, right now. Call it the Save Higher Education Act.