The undead chick in the basement

Can "Deadgirl," the deliberately outrageous zombie-rape teen drama, possibly live up to its Internet hype? 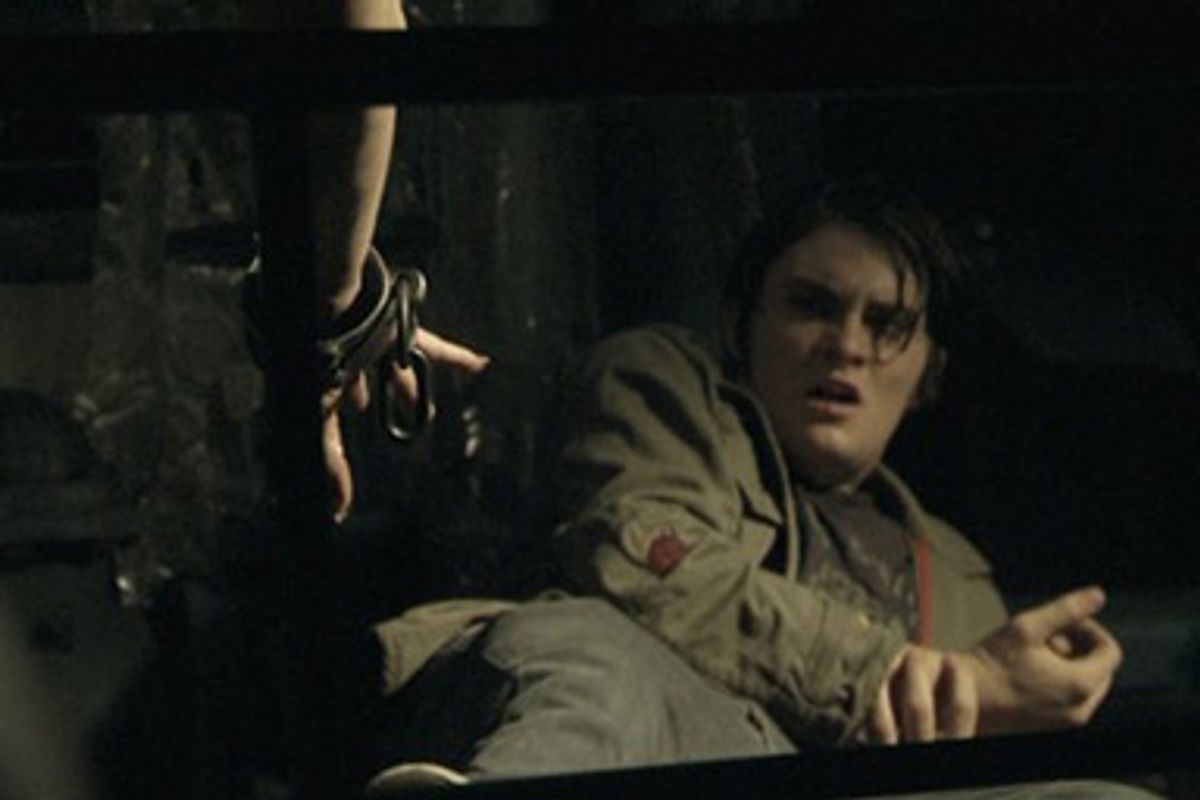 After building its aura of notoriety on the film-festival circuit, the indie horror flick "Deadgirl" reaches audiences this weekend through a highly unusual release pattern, playing Friday and Saturday midnight shows in a handful of big-city theaters. All the ingredients for a wannabe cult hit are in place: rumors of outraged walkouts; a lascivious advertising campaign featuring a woman's parted, reddish-gray lips viewed sideways (so they resemble a different part of the female anatomy); widespread Internet discussion, most of it on a sight-unseen basis. Salon's Tracy Clark-Flory wrote a Broadsheet post on "Deadgirl" earlier this month that inspired a heated exchange, and Annalee Newitz of io9 wrote a quasi-learned piece last fall about the tradition of "zombie feminism."

Honestly, it's almost charming to discover that a dramatic motion picture of any kind still has the power to get people all exercised. Of course, if you've heard anything at all about "Deadgirl" you've heard about its horrifying, not to say deliberately provocative, premise: A pair of high-school outcasts discover a naked girl wrapped in plastic in the basement of an abandoned mental hospital, and come to understand that she isn't quite alive and isn't quite dead. She's beautiful and she's no longer human and she seems to respond, in feral-animal style, to their touch. What are red-blooded, sexually deprived, teenage American males expected to do?

I'm not going to use up valuable Internet bandwidth to defend the morality of a film that is so consciously calculated to shock the shockable. Sexual violence and sexual slavery are terrible crimes, and depicting them in a fictional context, no matter how fantastic or how surrounded by quotation marks, is always going to be problematic for many viewers. I doubt that many women (or many men) who have survived sexual assaults will be entertained or titillated by the spectacle of this film's nameless zombie chick (the brave actress who took this wordless part is named Jenny Spain) being repeatedly raped, beaten, stabbed and shot.

That said, "Deadgirl" is a much better-crafted and subtler film than it sounds like, although it's also nowhere near as original as it briefly aspires to be. Its horrifying ideas and images -- I should make clear that very little of the violence is actually shown on screen -- serve as a symbolic lure, meant to draw you into a dark, compelling tale of teenage male bonding and high-school class warfare. Its two protagonists, weak-willed pretty boy Rickie (Shiloh Fernandez) and dead-end greaseball JT (Noah Segan), are classic teen outsiders, tormented by the jocks and staring at a long future of low-paying service jobs, alcoholism and chronic disappointment. If you consider the story as psychoanalytic drama, the dead girl not only isn't human, she isn't real at all -- she's nothing more than the fantasy projection of their masturbatory and perhaps homoerotic desire.

The writing-directing team of Marcel Sarmiento and Gadi Harel capture the sublimated violence of JT and Rickie's banter in unusually convincing detail; in fact, the movie's best scenes have nothing to do with the slowly decaying undead chick in the basement. (Although the violence quotient is relatively low, the squirm-inducing makeup effects are highly effective.) Try as you may to squeeze "Deadgirl" into some pseudo-feminist frame, it doesn't quite fit. This is a movie about youthful male alienation -- that venerable American-cinema topic -- and its tragicomic consequences. Yes, there is some funny stuff here, believe it or not. When JT and his lame-brain stoner lieutenant Wheeler (Michael Bowen) try to kidnap a random woman from a gas station for nefarious zombie-related purposes, the horror-movie setup rapidly devolves into violent and surprising slapstick.

Most of the outrage about "Deadgirl," I suspect, has been cooked up among people who don't experience much popular entertainment, and who therefore don't grasp its almost unbending tendency toward moral fable. In that respect, I'm reminded of the furor around the Grand Theft Auto video game, when Hillary Clinton and other upright citizens told us that the game encouraged players to murder prostitutes. (You could indeed kill prostitutes in the game, or anybody else you wanted to. That didn't mean it was a good idea.) I'm not telling you that you're hopelessly square if you find "Deadgirl" inherently despicable. But nobody who watches this movie and sees JT standing over the prostrate zombie and leering at Rickie, "You and me, man. Hot pussy, anytime we want it," will have any doubt about what fate awaits him. (And as I say, if the dead girl isn't really there, that line takes on a whole new meaning.)

On the other hand, Rickie, this film's dithering, handsome, morally ambivalent Hamlet, is a profoundly unsatisfactory character. Pining from afar for Joanne (Candice Accola), the popular redhead who ditched him in middle school, Rickie longs to be normal and escape from the stinky, claustrophobic underworld of zombie sexuality. He repeatedly tries to muster the courage to set the dead girl free, but let's just say that since she's more like a symbolic id-explosion than a character, every one of those attempts has unintended consequences. (Some of those are admittedly disgusting and/or satisfying.) Horror movies generally split the difference between titillation and driving home a reactionary moral message, and "Deadgirl" is no exception. Much of the allegorical force Harel and Sarmiento's film has built up is undone by its utterly conventional, lameass-switcheroo ending, which may be an indication that more than enough virtual ink has been spilled on this subject.

Beyond The Multiplex Movies Violence Against Women