Fiscally conservative Democrats, not Republicans, are Obama's real obstacle on the road to healthcare reform 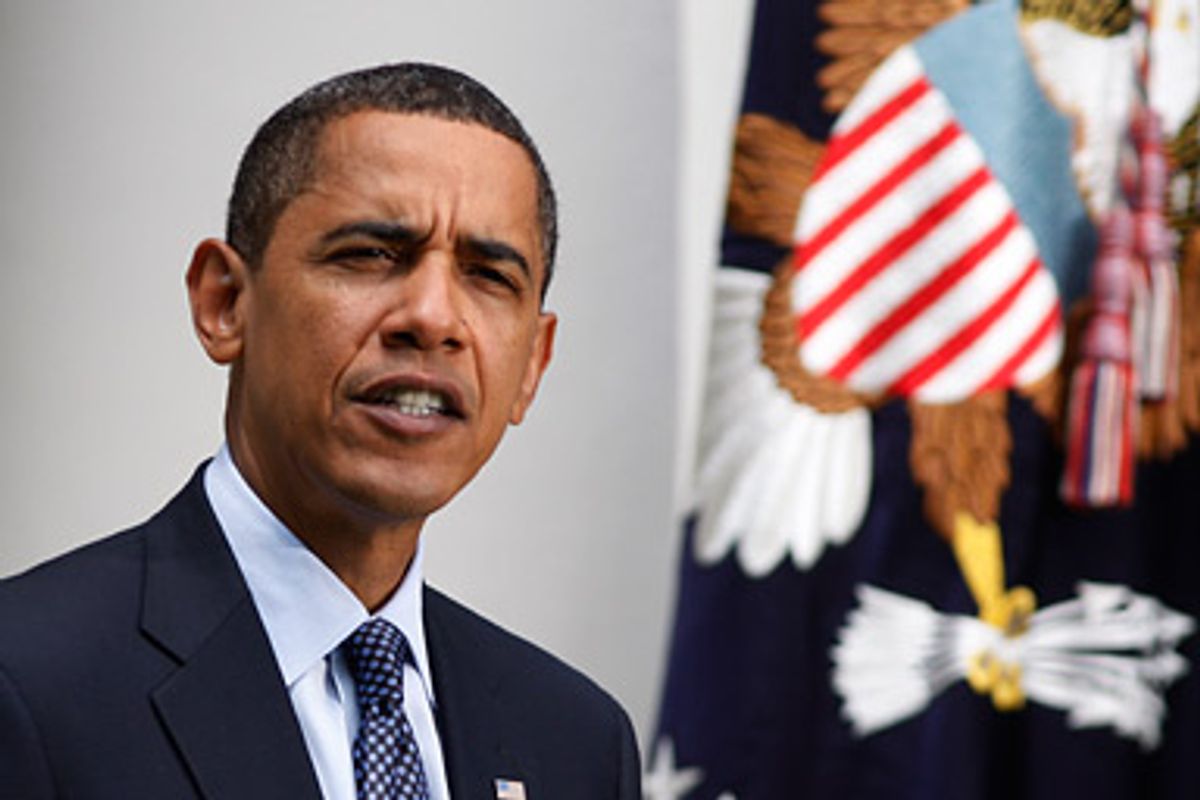 President Barack Obama speaks on health care reform in the Rose Garden at the White House, Tuesday, July 21, 2009, in Washington.
--

The moment had finally come, Tuesday afternoon, for President Obama to follow through on a pledge that he'd taken some heat for making during last year's campaign: He would meet, and negotiate on key issues, with enemies, no matter how vile they might seem to be. Which is how a group of conservative Blue Dog Democrats from the House found themselves invited into the Oval Office to chat about healthcare policy for an hour.

As the White House tries to stir itself into action to keep Obama's chief domestic policy priority from going off the rails, the administration is finding that its biggest problem isn't Republicans. Sure, the GOP opposes the healthcare reform plans moving through Congress, but what else is new? The GOP has opposed everything Obama's tried to do in his first six months in office. The complaints the White House is trying to accommodate now are coming from conservative and moderate Democrats.

In the House, a group of Blue Dogs have basically held legislation hostage, leveraging their numbers on the one committee in that chamber that has yet to pass a bill, the Energy and Commerce panel. In the Senate, Finance Committee Chairman Max Baucus and a handful of moderate Democrats are engaged in painstaking, secretive talks with moderate Republicans in an effort to draft a proposal that might win bipartisan support. None of the senators involved in the talks would discuss them with reporters this afternoon, but they insisted they were doing the right thing. "What we're doing in this group is working very methodically," said Sen. Kent Conrad, a North Dakota Democrat who's pushing for "co-ops" instead of a government-run public health insurance option in the reform. "We're not impatient, we're trying to get this job done in the right way so it can stand review and stand scrutiny."

The White House is involved behind the scenes on both sides of Capitol Hill. But in the meantime, aides keep sending Obama out to talk about the need to act -- hoping the president's personal popularity, even if it's starting to drop, will carry the day. "I know that there are those in this town who openly declare their intention to block reform," Obama said Tuesday afternoon, not long before he sat down with Democratic House Energy and Commerce members -- both Blue Dogs and progressives -- to see if he could make some headway. "It's a familiar Washington script that we've seen many times before. These opponents of reform would rather score political points than offer relief to Americans who've seen premiums double and costs grow three times faster than wages." Expect more of the same at Wednesday night's prime-time press conference -- after which you can get back to watching "I Survived a Japanese Game Show!" -- where Obama will once again try to force things along.

Whether that will be enough to quell the rebellion from conservative Democrats, of course, remains to be seen. The Blue Dogs -- and Conrad and Baucus and their allies -- say they agree with Obama on the need for healthcare reform. What they don't like is the massive cost involved in reforming it, possibly as much as $1 trillion over 10 years. So far, Congress hasn't settled on a single way to pay that tab; House Democrats want a new "surcharge" on the wealthiest taxpayers, while the Senate is tinkering around with a variety of options, none of which the negotiators would discuss until their talks are done. The White House says reforms will save money in the long run, because healthcare itself will be less expensive than if the current system continued, but the official arbiter of how much bills cost, the Congressional Budget Office, says none of the legislation moving now would actually "bend the curve" the way Obama wants to.

Which means that a lot of Democrats who rode along on Obama's coattails last fall are suddenly worrying how long the guy's going to be popular, and trying to take steps to protect themselves if November 2010 doesn't turn out to look quite as blue as November 2008. And in the face of a ferocious GOP assault on Obama's budgets and the economy, those worries are taking the form of fiscal conservatism. "There's a number of potential cost containment measures I think the American people expect before we consider any kind of new revenue," Rep. Mike Ross, a Blue Dog from Arkansas, told reporters at the White House after the Oval Office meeting. "They want us to squeeze every ounce of savings that we can out of the current system. That's what we're demanding."

That's also what makes the current impasse such a spectacle, and an irresistible topic for the cable news chatterboxes that the White House disdains. Even though Obama has managed to get all the major healthcare industry groups working alongside labor unions and other advocates of reform, it's his own party that's now standing in the way. Working on their own, Republicans simply don't have the numbers in either the House or the Senate to stop reform.

But that hasn't stopped the White House from trying to seize an opportunity to make the fight into an "us against them" moment. Last week, Sen. Jim DeMint, a rabidly conservative Republican from South Carolina, predicted healthcare could turn into "Waterloo" for Obama, telling allies during an anti-healthcare reform conference call, "It will break him." Practically the entire Democratic Party apparatus has now been enlisted to make sure every voter in the nation sees DeMint's remarks; Obama has started using the line to argue that the GOP is simply playing politics.

That probably won't help convince voters to support reform, or that the $1 trillion bill is paid for. But Democrats think they can turn the debate into Obama vs. the GOP, and wind up shocking Blue Dog-types into action. "You don't want to get lumped in with Jim DeMint on this if you're a moderate Democrat," one Democratic strategist said. Another benefit some Democrats see: The aggressive White House counterattack shows Obama is in the game, reassuring wavering allies who are afraid of taking lumps from the GOP. "People are like, 'Is [reform] dead?'" the strategist said. "Fighting back on this gives us momentum points," which might help change the cable news narrative that healthcare is in need of, well, emergency medical attention.

In fact, despite the panicky tone of a lot of the coverage of the debate, all the White House really needs to do this week is to prod Congress into keeping the legislation moving along. Aides on Capitol Hill expect any bill to wind up being changed, possibly dramatically, in a conference committee once both the House and Senate pass it; what Obama wants right now is just to get it there. Which is why the message out of the administration and its allies continues to be, basically, do something. "When we do pass this bill, history won't record the demands for endless delay or endless debates in the news cycle," Obama said Tuesday. "It will record the hard work done by the members of Congress to pass the bill, and the fact that the people who sent us here to Washington insisted upon change." If that's true, it might be a good thing -- because for right now, at least, the debates in the news cycle are looking uglier and uglier.