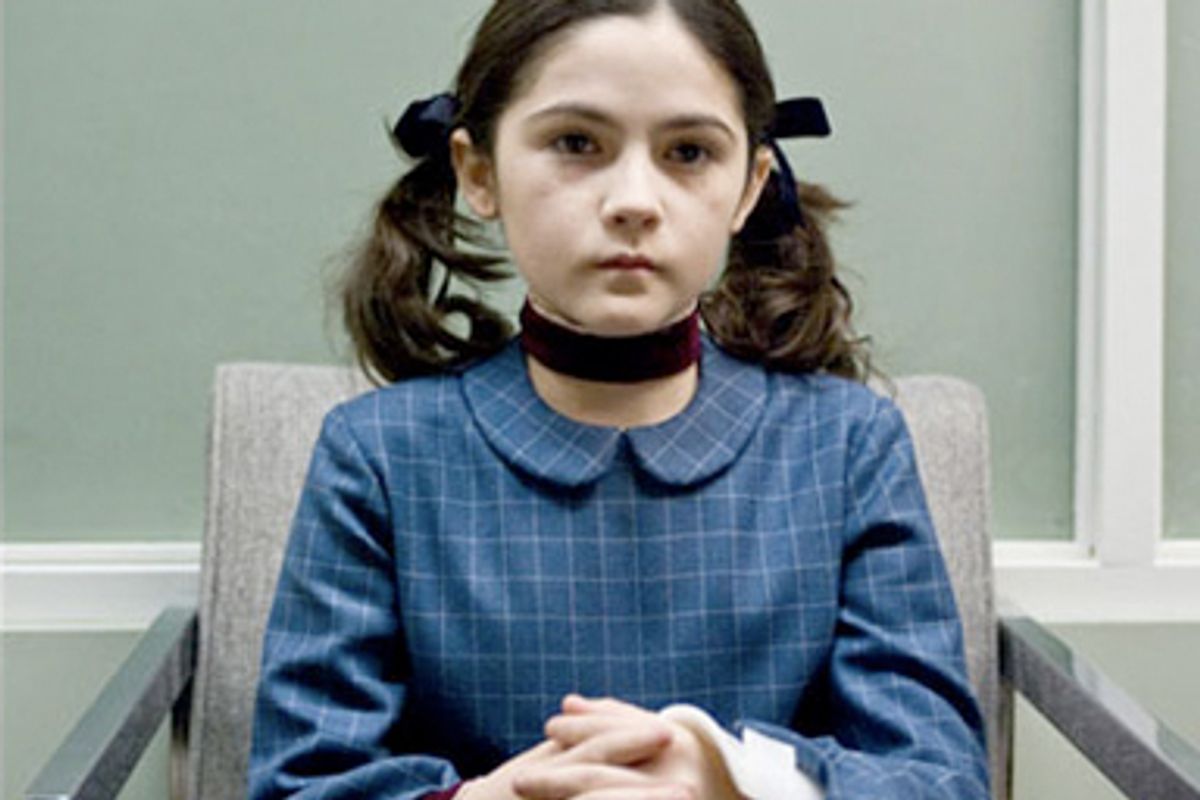 This Friday, the horror movie "Orphan" -- about an adopted girl who, in the grand tradition of horror movie children, turns out to be a deadly handful -- will open, and some adoption activists are not happy about it. The Christian Alliance for Orphans, among others, is protesting the film because of fears that "this feeds the stereotype of older adoptive children as 'damaged,'" according totThe New York Times' Motherlode blog. They've created a Web site, Orphans Deserve Better, which, in addition to featuring ostensibly heartwarming but nonetheless creepy revisions of the movie poster, aims to dispel common myths about adopting older children in order to ease potential parents' fears.

Now, nine times out of 10, in situations where one side is arguing, "It feeds negative stereotypes!" and the other is arguing, "Oh, lighten up, it's just a [movie/joke/blog post]!" you will find me on the humorless p.c. bleeding-heart side. But even I'm having trouble getting worked up about this one, for a few reasons. Number one being, as a friend of mine put it, "What, they're afraid people won't want to adopt white girls anymore?"

I'm absolutely sympathetic to the argument that older kids up for adoption are stigmatized as being baggage-laden and difficult, making many potential parents hesitant to consider giving them a home. But at the same time, I think that when you're talking about a responsibility as enormous and high-stakes as adoption, anyone who finds the thought excessively daunting probably shouldn't be encouraged to just stop worrying and give it a shot. I mean, I get irritated when I see pet adoption ads that are framed solely as, "Don't you have the love in your heart to take little Fluffy into your home?" Yes, of course I have the love in my heart, but maybe I don't have the room in my house, or the lifestyle to keep up with her exercise needs, or the money to fund her medications, or the patience to deal with her anxious habits. Too many people don't consider anything beyond the warm fuzzies, literal and figurative, when adopting a dog. When you're talking about a child who's already suffered a tremendous loss, if not abuse and/or a series of temporary homes, sugarcoating the reality to get potential adoptive parents off the fence is not necessarily in anyone's best interest.

And that, unfortunately, is exactly what the Christian Alliance for Orphans is doing. The Orphans Deserve Better site has a "Facts" section that includes the results of a 1994 study by the Search Institute, which found adopted teens to be happy, healthy and well-adjusted. Writes Lisa Belkin at Motherlode, "I have to admit, some of these facts surprised me. For years I'd heard stories of older adoptions that ran into trouble, and while I like to think that a horror film would not sway me, I am realizing that anecdote over the years already has." Problem is, the Search Institute study did not look at older adoptions; it looked at teens who had been adopted as infants. Belkin and the "Facts" page also cite other studies I didn't look up, but in both cases, the bulk of the information comes from this one about "adopted teens," never mentioning that it's not about kids adopted as teens. I can only assume that Orphans Deserve Better's bait and switch worked on Belkin exactly as it was intended to.

Of course, this doesn't mean that the stereotypes about older children are necessarily true; only that this particular group's best evidence doesn't disprove them and shouldn't be presented as though it does. Encouraging potential adoptive parents to seriously consider older kids is a laudable goal, but the end doesn't justify disingenuously pointing to studies with positive results that are actually irrelevant to the subject. It doesn't justify playing on people's sympathy and guilt in hopes of overwhelming any intellectual reservations they might have. The commitment and responsibility of adoption are far too intense to trick people into taking them on. Orphans do indeed deserve better.

Which means, as far as I'm concerned, if a horror movie is enough to dissuade you from adopting an older child, then that child is probably better off without you. I can appreciate some of the protesters' actions and arguments, such as their (successful) campaign to get the line "It must be hard to love an adopted child as much as your own" removed from TV ads for "Orphan." It's one thing to leave that in a movie people can choose whether to see, quite another to blast those words into the living rooms of adopted children without warning or context. But really, I can't see how one more horror movie about a supernaturally evil kid will interfere with anyone's serious desire to be a parent. Hell (no pun intended), starring in "Rosemary's Baby" didn't stop Mia Farrow from having four biological kids, as well as adopting 11 more (nor did raising 15 kids stop her from starring in the remake of "The Omen"). In fact, by taking the horrors of parenting so far over the top, movies about evil-to-the-core rugrats might just act as a release valve for normal parental anxieties. As Broadsheet contributor Amy Benfer told me, "Basically, kids, in general, freak people out and every parent at one time feels their toddler may be a demon child. That's why it works."