An important new report (.pdf) was released today by Human Rights First regarding the overwhelming success of the U.S. Government in obtaining convictions in federal court against accused Terrorists.  The Report squarely contradicts the central claim of the Obama administration as to why preventive detention is needed:  namely, that certain Terrorist suspects who are "too dangerous to release" -- whether those already at Guantanamo or those we might detain in the future -- cannot be tried in federal courts.  This new data-intensive analysis -- written by two independent former federal prosecutors and current partners with Akin, Gump:  Richard B. Zabel and James J. Benjamin, Jr. -- documents that "federal courts are continuing to build on their proven track records of serving as an effective and fair tool for incapacitating terrorists."

The core conclusion of this Report is this:

In a call today to discuss the newly released Report, Benjamin said that the primary purpose of the analysis was to ascertain "the capacity of the federal courts to handle terrorism cases."  He concluded: "The 2009 federal courts have proven they are up to the task of handling terrorism cases.  The data and other observations confirm that prosecutions of terrorism defendants generally leads to just, reliable results and does not cause serious security breaches."

Specifically, the Report studied 119 cases of Terrorism filed in federal courts since 2001, covering 289 defendants.  Of those, 75 of the cases are still pending, which means 214 have been resolved.  Of those 214 resolved cases, 195 of them have resulted in a conviction on at least one criminal count (91%).  But even among the 19 cases that resulted in some form of acquittal, the defendant actually won nothing, since many were ultimately convicted on a new indictment.  Here is a graph reflecting how Terrorism cases brought in real courts overwhelmingly result in convictions (click on images to enlarge): 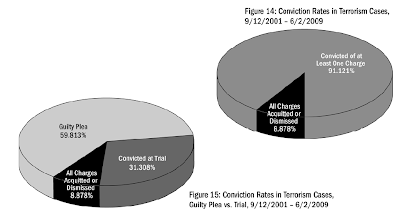 When one takes into account the small handful of "acquitted" defendants who were ultimately convicted anyway, this is as close to a 100% conviction rate as a justice system can possibly get while still being a "justice system."  A system that guarantees that the Government can convict every person it accuses, by definition, is not a "justice system" at all.

One of the principal benefits of the Report is that it so thoroughly documents a point I have been making over and over:  there are few things easier than obtaining a conviction against an accused Terrorist in federal court because of what the Report calls "a formidable arsenal of criminal statutes to deploy in terrorism prosecutions."  The Report focuses on two breathtakingly broad statutes commonly used to convict Terrorists:  the "material support" statute and the new "narco-terrorism law" passed by Congress.  In particular, the "material support" cases "demonstrate the wide breadth of conduct these statutes encompass--from cases involving sleeper terrorists to individuals providing broadcasting services for a terrorist organization's television station."  Indeed, using the "material support" statute, the federal government in the last couple of months alone has been able to indict and convict individuals accused of little more than expressing loyalty to Al Qaeda.  The "narco-terrorism" statute is increasingly enabling convictions of Taliban members for involvement in that country's drug trade.

Ultimately, the most persuasive arguments against the case for preventive detention is that -- whatever else is true -- a vast array of highly complex Terrorism cases has been successfully prosecuted in federal court, over and over and over again.  A few illustrative examples discussed by the Report are summarized here.  That's because, as the Report documents, "A Broad Array of Evidence [Has Been] Successfully Introduced in Terrorism Prosecutions."  The claim that Bush-era Terrorist suspects cannot be tried in federal court is simply disproven by the extremely high success rate the U.S. has had in doing exactly that.  As Human Rights First Executive Director Elisa Massimino told me today, there is simply no evidence that there are truly dangerous Terrorist suspects who cannot be tried in a federal court, and the long list of successful prosecutions -- including in the Bush era -- is compelling evidence that they can be.

It's true, as Daphne Eviatar notes, that the Report doesn't deny that there may be cases which cannot be successfully tried in a federal court -- that's a negative that cannot be proven, especially since the Obama administration continues to keep the facts of those cases a secret -- but the Report's central conclusion certainly undercuts the claim that federal courts are an infeasible forum for trying Terrorism cases.  Indeed, in light of these sweeping prosecutorial weapons, it is extremely difficult, if not impossible, to imagine a detainee about whom it can simultaneously be said:  (a) he cannot be convicted under America's amazingly broad anti-Terrorism statutes and prosecution-friendly procedures, and (b) it's clear, based on reliable evidence, that he poses "a significant security threat."  Anyone to whom (b) applies would, virtually by definition, be excluded from (a).  And, as noted, any system that ensures a 100% conviction rate isn't a "justice system" at all; it's a scheme of show trials.

The central claim in the case for preventive detention -- Dangerous Terrorists can't be convicted in federal courts -- is based on pure conjecture and the completely unproven claims of government officials who seek the power to imprison people without charges.  Independently, if evidence is so unreliable that courts deem it inadmissible because of how it was obtained (i.e., via torture or other unreliable methods), then it should go without saying that we ought to want more than that before we declare someone, without a trial, to be  Too Dangerous To Release and stick them in a cage indefinitely.  Isn't that not only a core American premise, but also true as a matter of basic logic (i.e., it's wrong to imprison people based on evidence obtained through unreliable means)?

The Report also debunks other excuses for refusing to try Terrorist suspects in federal courts.  In response to the claim that evidence obtained from foreign intelligence-gathering is often unusable because the suspected Terrorists were not read their Miranda rights, the Report notes that "there is a question as to whether courts would uniformly apply the Miranda requirement in the context of intelligence gathering, which may be quite different than the domestic law-enforcement scenario for which the Miranda doctrine was created."  Moreover, "soldiers and sailors do not, and need not, administer Miranda warnings to individuals who are captured in combat."  It is thus highly unlikely that Miranda would serve as a barrier to Terrorism prosecutions:

In the event that the government does seek to use a battlefield detainee's post-capture statements in a criminal prosecution, as was the case with John Walker Lindh, there are substantial question as to whether Miranda would apply at all, or whether an exception based on New York v. Quarles, 467 U.S. 649 (1984) would obviate the need to give the warnings.

Indeed, America has one of the harshest and most rigid criminal justice systems in the world, and within that system, there are few categories of defendants, if there are any, treated more harshly than accused Terrorists.  As the Report explains: 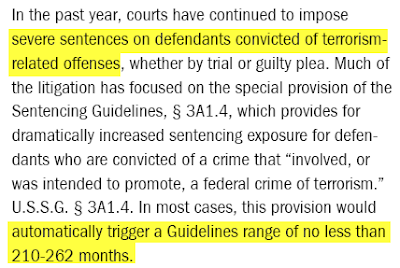 The Report concludes with this vital observation -- and, remember, this is from two former federal prosecutors: 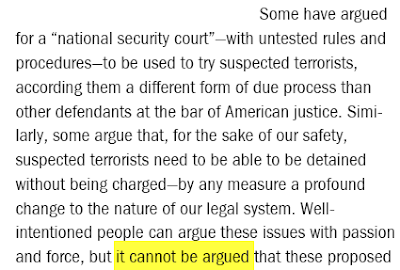 Of course, the radical nature of preventive detention was previously recognized by The New York Times, which explained that Obama's proposed detention policy "would be a departure from the way this country sees itself"; by Sen. Russ Feingold, who wrote (.pdf) that such a system "violates basic American values and is likely unconstitutional" and "is a hallmark of abusive systems that we have historically criticized around the world"; and even by Obama's own White House counsel Greg Craig, who told The New Yorker's Jane Mayer in February -- before he knew that Obama would advocate such a system -- that it's "hard to imagine Barack Obama as the first President of the United States to introduce a preventive-detention law."

Whatever arguments one might want to make to support such a radical policy, the idea that federal courts are ill-equipped to adjudicate charges against members of Al Qaeda and other Terrorist groups is, as this new Report documents, patently and empirically false.  Our court system has been developed over the course of several hundred years and has proven time and again that it is perfectly capable of convicting even the most dangerous Terrorists accused of the most brutal and complex crimes -- or even those accused of nothing more than allegiance to an organization deemed to be a Terrorist group or an Enemy of the United States.  The prime argument of progressives, Democrats and other Bush critics over the last eight years was that we should not alter our institutions and system of justice in the name of the War on Terror.  That principled argument is every bit as true now as it was back then.

UPDATE:  The ACLU's Ben Wizner emails to point out why this Report is so devastating to Obama's case for preventive detention:

Look at what Obama said on 5/21 at the National Archives. As "examples" of dangerous people who couldn't be prosecuted he offered "people who have received extensive explosives training at al Qaeda training camps, commanded Taliban troops in battle, expressed their allegiance to Osama bin Laden, or otherwise made it clear that they want to kill Americans."

The first example is material support, the second is Hamdi, the third is conspiracy, and the fourth is ridiculous. (If we really want to lock up everyone who intends us harm but does nothing in furtherance, we need a hundred Guantanamos, not one.)

So I think [the Report] refutes Obama on everything except his most disturbing argument: we can't prosecute because the evidence is "tainted." As to that, we simply have to say (as you've said) that if evidence is too tainted for trial, it's surely too tainted for imprisonment without trial.

I've been disturbed by how willing people have been -- after Obama's speech -- to repeat the mantra that "these people are too dangerous to release but cannot be tried in court," because there is absolutely no reason to believe that is true and plenty of reasons to believe it is not.  Even if it were true, if you think that convicting people based on torture-obtained evidence is morally repugnant (as all civilized societies, by definition, have long held), then it must be at least as repugnant to keep them imprisoned without a trial based on the same torture-obtained, inherently unreliable evidence.

UPDATE II:   Over at Balkinization, the former blog of Obama OLC official Marty Lederman (by the way, is there going to come some point where Obama's chosen OLC chief, Dawn Johnsen, is given a vote by the Democratic-controlled and filibuster-proof Senate?; why has it taken 6 months and counting?), Liza Goitein of the Brennan Center’s Liberty and National Security Project at NYU Law School makes an excellent case -- from both a legal and historical perspective -- as to why Obama's preventive detention and military commissions proposals are so wrong and so unnecessary.